In 2014, an exhibit documenting the works of British abstract painter Francis Bacon is to open in Moscow as part of the UK-Russia Year of Culture. Motions were set in place years ago by the former director of the Pushkin Museum, Irina Antonova, who left the post at the beginning of July.

The new director of the Pushkin Museum, Marina Loshak, told RIA Novosti that the idea to hold an exhibition of Bacon's works was conceived by Antonova many years ago. Antonova even spent time in England to gather items for display in the show.

However, the exhibit never took place, and no official explanation was ever given as to why the idea was derailed. 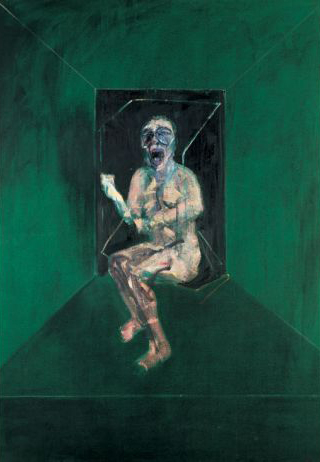 "Study for the Nurse" displaying an agonized expression, painted in 1957.

"I discussed next year and the exhibition with her [Antonova]" said Loshak, reporting on a phone conversation between her and Antonova: "We have to do an exhibition of Bacon ... I was a great friend to Bacon and his wife, went to their house, and took things away from the shop," Antonova reportedly said.

The Irish-born Bacon died in 1992, and over 25 countries currently hold collections of his works, spread out more than some 80 museums. However, some of his paintings were more directly influenced by Russian culture, including his 1957 work "Study for the Nurse in the Battleship Potemkin," based on the screaming mouth of a nurse in the famous Odessa steps sequence, which also inspired many of his other related artworks.

His art was exhibited once before in Moscow: In 1988, English dealer James Birch displayed Bacon's paintings, including "Study for the Nurse," at the Central House of Artists on Krymsky Val. The opening was met with a frosty reception, according to contemporary reports from then-independent journalist Andrew Graham-Dixon.

Graham-Dixon's article from the same year recalled that a Soviet general aired suspicions that Bacon's paintings were evidence of a "sick psyche," and another Russian bystander adding "I don't think it is possible for great art to be so unpleasant," labeling the subjects "monsters."

The Pushkin Museum retained documents related to Antonova's own trip and fully intends to take advantage of the fresh possibility of holding the exhibit. Loshak rhetorically asked the agency how the museum could "not build upon" the earlier idea. She mentioned the additional possibility of the Bacon exhibit taking place at another venue, the Hermitage.

'I was a great friend of Bacon and his wife, I went to their house and took things away from the shop'
Irina Antonova
Ex-museum director

Upcoming plans for the Pushkin Museum are numerous, the interview revealed. In the forthcoming months, it will also host an exhibition dedicated to the composer and conductor Benjamin Britten as well as displays of large private collections.

Among them will be items from the stores of Polish painter and set designer Tadeusz Kantor, which will include works by fauvist-surrealist artist Marc Chagall and Leon Bakst, who after his earlier paintings went on to design costumes for Ballets Russes. In December, the museum will also be holding an exhibition to celebrate the jubilee of Alexander Solzhenitsyn.

Next year, 2014, was officially designated the bilateral UK-Russia Year of Culture in March when Foreign Minister Sergei Lavrov and British Foreign Secretary William Hague signed a joint statement declaring that embassies in both countries would be responsible for a comprehensive program of events as part of a long-standing cultural exchange.