Demonstrators especially criticized President Vladimir Putin, with performers leading the crowd in cheering "Putin Out!" An enormous blow-up doll caricaturing the president flanked one side of the stage — flexing his muscles, bare-chested, and draped in a rainbow flag.

Protesters said their main concern was the law adopted by Russia's parliament in June making "propaganda of nontraditional sexual relations among minors" illegal. 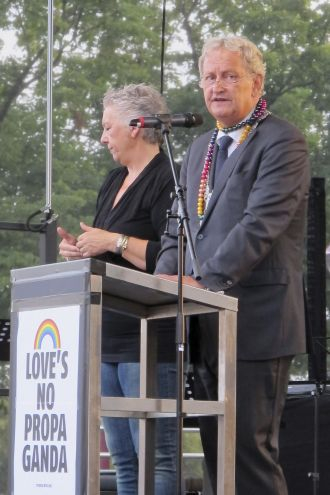 Amsterdam Mayor Eberhard van der Laan told the crowd that he hoped Sunday's protest would send the message to Moscow that "love is not propaganda."

Afterward in an interview, he said the city "is proud of its homosexual community, and they have the right to support from government," not persecution. Amsterdam has a long history of tolerance of gay rights, including performing the first gay marriages in 2001.

Van der Laan said he did not know whether the message would reach Moscow, but the protest was "a matter of principle."

"You have to say something, at any rate," he said. He called on the Dutch government to submit a complaint to the European Court of Human Rights.

Dutchman Wijnand Looien, who traveled from the far south of the country to attend, said he believed such demonstrations made a difference.

"There's discussion about this everywhere," he said. "The pressure is increasing, and that's a good thing."

The protest, titled "To Russia With Love," was organized in response to a concert featuring a Russian state orchestra and choir that was held on the far side of the square later in the evening. The two countries have named 2013 as a special year to celebrate historical ties.

But Van der Laan declined to meet with Putin when he visited the Netherlands in March, sending lesbian councilwoman Carolien Gehrels in his place and flying a rainbow flag over City Hall.

Organizer Frank van Dalen of Pride United said he was thrilled with the turnout for the demonstration, which was put together in a matter of days — word spread quickly on social media. 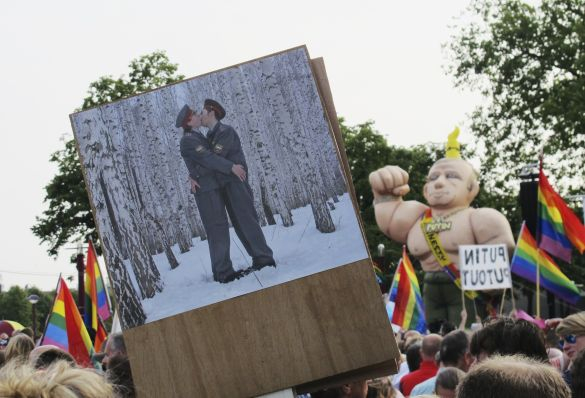 A poster of two Russian policemen kissing being held by a protester.

"It shows that people are incredibly angry" about Russian treatment of gays, he said. "Not only gays and lesbians, but heterosexuals have come out to support them, and transgender and bisexual. his is something that concerns everyone."

After the protest ended, the gay activists marched in a group to the opposite end of the square to attend the Russian concert, which featured Russians in folk costumes doing traditional dances.

The gay activists did not disturb the performances, though they continued to wave rainbow flags from the audience.

Russian tourist Alina Aliyeva, who came for the Russian folk concert, said she did not approve of the gay demonstration.

"They shouldn't do this, because it can worsen the situation," she said. "We come from different cultures — we have different histories and different customs."