Luzhniki Stadium, as it has been on every morning of the world championships, was short on fans — in contrast to the previous evening when the stands rocked with appreciation after the Isinbayeva show.

While the Russian enjoyed the cheers of a nation, the 35-year-old Heffernan had the one supporter who mattered most as he scooped Ireland's first world gold in 18 years.

"My wife is here with me and we are so happy," he said with understatement after denying the hosts a clean sweep of the walks after they took gold in both 20 kilometer events earlier in the week.

"I believed I could be the winner," he added after a career of near-medal misses.

"It was very tough, but I tried to stay positive. The last 10 kilometers are like a crucifixion."

With no evening session Wednesday as the nine-day championships take a breather, the walk and a handful of qualifying represented thin fare. 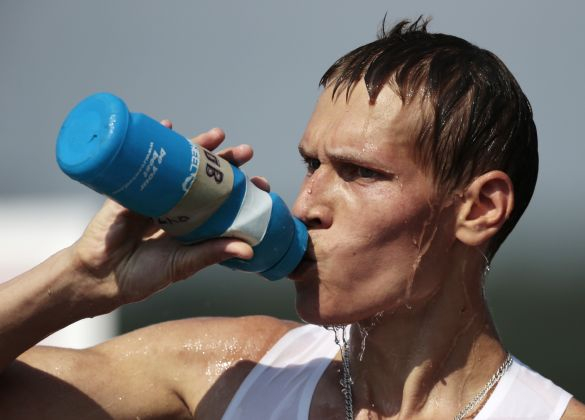 Russia’s Mikhail Ryzhov, the runner-up in the 50 kilometer race walk.

Two long-jump champions at opposite ends of their careers experienced contrasting fortunes, with Briton's Olympic winner Greg Rutherford failing to reach the final and "golden oldie" Dwight Phillips continuing his dream of a last hurrah.

Rutherford, 26, declared himself fit at the last minute for the championships after suffering a hamstring tear five weeks ago, but his best of 7.81 meters Wednesday fell short.

"I just didn't have what it took out there today. Believe me, I gave everything," he said. "My last training session, I had it two days ago and it felt fantastic."

American Phillips, 35, postponed his retirement for a year to try to become the first U.S. athlete to win five individual world championship titles in the same event.

Kenya's Asbel Kiprop and Silas Kiplagat battled it out for 1,500 meters gold and silver two years ago in Daegu, South Korea, and both eased into Friday's semi-finals with heat wins.

Kiprop is favorite to defend his title after clocking a stunning 3:27.72 in Monaco on July 19, putting him fourth on the all-time list, but he guarded against complacency.

"I never under-estimate anyone," the Kenyan said.