Alexei Navalny was registered as a candidate for the Moscow mayoral election Wednesday, but his political career hinges on another decision to be made 800 kilometers away: A Kirov court will declare its verdict in the embezzlement trial against him Thursday, and it may bar him from political office for life.

Navalny, a sharp and witty blogger propelled by recent protests in Moscow to prominence as one of Russia's opposition leaders, is accused of embezzling 16 million rubles ($490,000) worth of timber from a state-owned company in 2009.

If the court issues a guilty verdict in the case, it can put him in prison or impose a conditional sentence, but either way it would ruin any future plans the anti-corruption activist has for running for a political post. The prison sentence requested by prosecutors is six years, and a 1 million ruble fine is also possible.

In accordance with legislation that came into effect last year, a guilty verdict would knock Navalny out of the mayoral race.

Adding suspense to the situation, however, Acting Mayor Sergei Sobyanin said Wednesday that his main rival in the election would still be able to campaign regardless of the verdict.

he will continue to participate in the election," Sobyanin, the Kremlin-backed candidate in the race, told Interfax.

In view of Russia's mostly convoluted elections legislation, Sobyanin's comment can have multiple interpretations. Leonid Volkov, Navalny's campaign manager, said that it all depended on when the verdict came into effect.

"Sobyanin must have already read the verdict, which only makes us furious," he said. 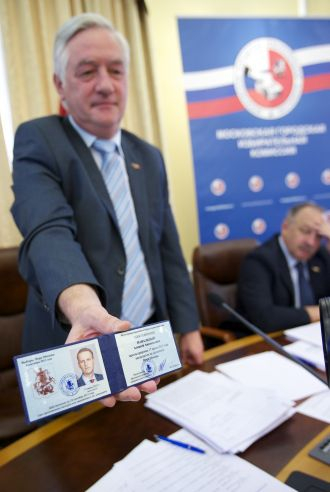 After the verdict is read, Navalny will have 10 days to file an appeal. After that, the court will have 30 days to begin considering it. If the appeal is revoked before Sept. 8th, Navalny will be barred from running in the election.

Navalny himself expressed uncertainty about the appeals process, however.

"We don't know what is going to happen — the court can consider the appeal in a second, or it can take some time to do so," Navalny told Moskovsky Komsomolets.

Experts interviewed by The Moscow Times were unable to give a definite prediction on the matter.

"It all depends on how the court qualifies his actions. Right now, he is accused of a grave crime, but the court can sentence him for a lighter one," said Igor Borisov, head of the Russian Electoral Law Institute.

Others noted how this situation has brought into the spotlight amendments to  electoral legislation that came into force in June last year, banning people from getting elected if they have a criminal conviction.

"These amendments are nonsense from a legal point of view; they contradict the Constitution," said Alexander Kynev, head of the analytical department at independent elections watchdog Golos.

In what is likely his last post before the verdict announcement, Navalny told his supporters to stand strong and be vigilant regardless of the outcome.

And his supporters seem to have good reason to do so. According to Stanislav Belkovsky, a former Kremlin insider, it might actually be beneficial to Navalny's political career to go to prison, as this would raise his profile among the  public by making him a political martyr.

"Navalny can campaign even from prison. I don't know if they [the government] will put him there, but he definitely won't be left alone either way," he said.