NEW YORK — As the hub of the Soviet Union, Russia was reviled for rights abuses by many U.S. conservatives during the Cold War. Now, some are voicing support and admiration as Russian authorities crack down on gay-rights activism.

The latest step drawing praise from social conservatives is a bill signed into law Sunday by President Vladimir Putin that would impose hefty fines for holding gay pride rallies or providing information about the gay community to minors.

“You admire some of the things they’re doing in Russia against propaganda,” said Austin Ruse, president of the U.S.-based Catholic Family and Human Rights Institute. “On the other hand, you know it would be impossible to do that here.”

Public opinion in the U.S. has been moving more and more toward acceptance of gay rights. President Barack Obama speaks out in favor of gay marriage, a half-dozen states have approved same-sex marriage in the past year and the Supreme Court last week made two landmark rulings that assured federal benefits for married gay couples and struck down California’s same-sex marriage ban.

Frustration among conservatives on the issue in the U.S. has some looking overseas.

Ruse, whose institute is seeking accreditation at the United Nations, plans to travel to Russia this summer to meet with government officials and civic leaders.

“We want to let them know they do in fact have support among American NGOs on social issues,” he said.

Among others commending Russia’s anti-gay efforts was Peter LaBarbera of Americans for Truth About Homosexuality.

“Russians do not want to follow America’s reckless and decadent promotion of gender confusion, sexual perversion, and anti-biblical ideologies to youth,” LaBarbera said on his website.

In a sign of Russia’s evolving stature among some U.S. social conservatives, the U.S.-based World Congress of Families plans to hold its eighth international conference at the Kremlin’s Palace of Congresses in Moscow next year. Past conferences in Europe, Mexico and Australia have brought together opponents of abortion and same-sex marriage from dozens of countries.

“The Kremlin used to be a no-no for conservatives,” said Larry Jacobs, managing director of the World Congress. “We’re going to redeem that building.”

The website for the September 2014 conference declares that Russia, “with its historic commitment to deep spirituality and morality, can be a hope for the natural family supporters from all over the world.”

Jacobs, in an interview, drew a link between Russia’s disapproval of homosexuality and its worries about a population decline.

“They’ve got a problem with marriage rates and fertility, and it doesn’t help if you’re encouraging non-reproductive behavior,” he said.

Abortion remains legal in Russia through the first 12 weeks of pregnancy — a contrast to the general view of most U.S. social conservatives that abortion should be outlawed. However, the current abortion law — passed in 2011 — is more restrictive than its predecessor.

There’s little doubt that Russians, overall, are far less supportive of gay rights than Americans. According to a Pew Research Center survey released June 4, only 16 percent of Russians said homosexuality should be accepted by society, compared to 60 percent in the U.S., and 80 percent or higher in Canada, Spain and Germany. However, there’s less support for gay rights in some Eastern European countries, and even in Western Europe the issue can fuel conflict, as evidenced by recent clashes in France between far-right protesters and police over a new gay-marriage law.

The Obama administration has said it would make gay rights an important part of its foreign policy, raising the possibility that countries viewed as discriminating against gays could suffer consequences.

Secretary of State John Kerry outlined this approach on June 19 at a gay pride event at the State Department. He did not mention Russia by name, though he spoke disapprovingly of “anti-propaganda laws in Eastern Europe” that are targeting gay-rights demonstrators.

“We just have to keep standing up for tolerance and for diversity,” Kerry said. 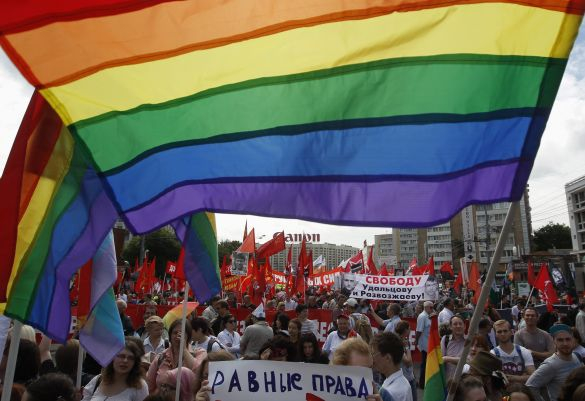 The Russian bill has been assailed by gay-rights and human-rights groups in the U.S.

“The admiration of some American conservatives for the repressive Russian policies regarding gay rights are quite simply the words of snake-oil salesmen,” said Roberta Sklar of the International Gay and Lesbian Human Rights Commission.

“They have lost their footing on U.S. soil and are trying to breathe life into a dying ideology abroad,” she said.

Two other groups, the Human Rights Campaign and Human Rights Watch, have called on the International Olympic Committee to speak out against the bill as Russia makes final preparations to host the Winter Olympics in Sochi next year.

“This draft law is clearly incompatible with the Olympic Charter’s promotion of ‘human dignity,’ as well as a blatant violation of Russia’s international legal obligations to guarantee nondiscrimination,” Human Rights Watch said in a letter to the IOC.

Stefano Gennarini, a colleague of Austin Ruse’s at Catholic Family and Human Rights Institute, suggested in a blog post that criticisms of the bill in the West were “hyperbole” and defended it as a reasonable effort to protect children.

“Russians have consistently denied homosexual groups parade permits, sparing its children and the public at large the ludicrous and disturbing behavior on show in the squares and streets of Europe and America,” Gennarini wrote.

He characterized the bill’s proposed fines as a tax on public displays of affection by homosexuals, adding that “$155 is hardly unmanageable for homosexuals who want to kiss in public,” he wrote.

Gennarini, in an interview, said it would be “imprudent” for U.S. diplomats to criticize Russia’s efforts to curtail gay-rights activism. He said people in other regions — notably Africa and the Islamic world — might look to Russia as a positive example when considering laws of their own.

Scott Lively, a U.S.-based evangelical lawyer and activist, conducted a 50-city speaking tour of Russia in 2007 and says the current bill reflects policies that he advocated at the time.

At the end of his tour, Lively released a “Letter to the Russian People,” and he redistributed it this month after the parliamentary vote.

“The purpose of my visit was to bring a warning about the homosexual political movement which has done much damage to my country,” he wrote in the letter. “This is a very fast-growing social cancer that will destroy the family foundations of your society if you do not take immediate, effective action to stop it.”

Lively advocated training therapists in the techniques of helping gay people “recover” from same-sex attraction, and he urged Russia to criminalize the public advocacy of homosexuality.

“Russia could become a model pro-family society,” he wrote. “If this were to occur, I believe people from the West would begin to emigrate to Russia in the same way that Russians used to emigrate to the United States and Europe.”

Lively has been sued in U.S. federal court by a Uganda-based gay-rights group, accusing him of persecuting gays in that East African country.

The suit — which Lively is seeking to have dismissed — contends that he was a key figure in consultations in Uganda that produced tough anti-gay legislation in 2009. The initial version of the bill called for the death penalty in some cases of gay sex, although the author of the measure — which remains pending — says he has removed the death penalty provision.

Lively said he would like to see efforts in the U.S. to discourage all sexual activity outside of marriage, but doubted efforts to restrict gay activism could make headway here.

“Russians, even after glasnost, are comfortable with an authoritarian style,” he said. “That wouldn’t work in the United States.”