KIEV — When the time came to vaccinate her 4-year-old daughter, Yelena Hlushko hesitated, spooked by widespread fears in Ukraine about vaccines and by a boil her older child developed after an immunization shot. Eventually, she decided to follow the government's recommendation — only to find her local health clinic was out of the vaccine.

A combination of suspicion, funding problems, alleged corruption and inefficiency leave Ukraine with the lowest vaccination rate of the 15 former republics of the Soviet Union, even though it is one of the best developed — and the rate has fallen sharply in recent years. International health officials warn that the problems leave Ukraine vulnerable to an outbreak of polio, a disease that Europe has largely stamped out.

Only about half of Ukraine's children are fully immunized against polio, measles, rubella and other diseases that vaccines can prevent, despite a government policy calling for free universal vaccination, according to UNICEF, the United Nations children's agency. That compares with a rate of some 90 percent or higher in most Western European countries.

Ukraine does not mandate vaccination, but encourages it by requiring children to show certification of vaccination to be admitted to public schools. However, many parents who refuse to vaccinate arrange for fake certificates.

Widespread fears about vaccines prompted the government to cancel a UN-backed measles vaccination campaign in 2009, and the number of measles cases skyrocketed from about 40 in 2010 to 13,000 last year, including one lethal case, according to the Health Ministry.

Possibly more worryingly, Ukraine is at risk of a polio outbreak, according to the World Health Organization. Only 74 percent of the population is immunized against it, compared with 93 percent in the United States. To boost preparedness, Ukraine last month hosted a WHO-led polio simulation exercise, in which health officials worked out ways of better detecting, isolating and treating polio cases, should an outbreak occur.

"What really worries us is that polio, a disease which we hardly see anymore … will come to Ukraine," said Dr. Dorit Nitzan, the head of the WHO office in Ukraine. "Only then will people understand that vaccination could have saved them."

Ukrainian health guidelines say children should be vaccinated against 10 infectious diseases. UNICEF estimates that full compliance declined from 70 to 80 percent in 2008 to about 50 percent last year. The Health Ministry disputes those figures, with Health Minister Raisa Bohatyryova estimating coverage at 60 to 70 percent.

"Ukraine is a high-risk country for communicable diseases because the immunization coverage rate, especially among children, is very low," said Yukie Mokuo, UNICEF's representative in Ukraine, adding that the rate resembles that seen in destitute sub-Saharan African countries. 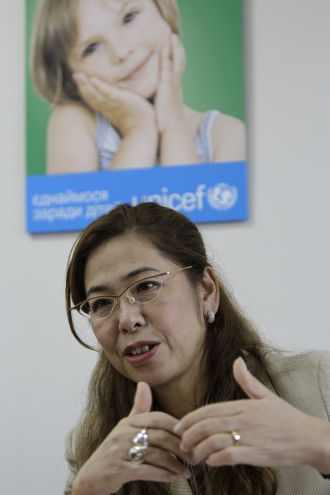 Economic problems and political crises of recent years have led to delays in vaccine procurement in the government-run health system. Some state clinics that provide free health care are without certain vaccines for months. Ukraine is battling a recession, and the Health Ministry says the state budget finances only some 65 percent of its vaccination needs — 302 million hryvna ($38 million) of the needed 465 million.

In Hlushko's case, the local government-run clinic in her city, Chernihiv, was out of the combined vaccine against diphtheria, tetanus, pertussis and polio for her daughter Anya for about 10 months. Hlushko was forced to buy the three required doses out of her own pocket from a pharmacy for 250 hryvna ($30) each, a sum she could barely afford. Tens of thousands of other parents simply cannot pay, as Ukraine's average monthly wage is 3,230 hryvna.

But even when vaccines are available for free, many Ukrainian parents are afraid to use them. In 2008, the death of a 16-year-old boy less than a day after receiving a shot for measles and rubella sparked a major scare that caused a sharp drop in immunization across the country. Although the Health Ministry and the World Health Organization concluded that the boy died of a bacterial infection unrelated to the vaccine, sensationalist media coverage and contradictory government statements drove parents to refuse vaccination.

Mainstream health experts as well as WHO say that immunization is a safe, efficient and cost-effective way to combat communicable diseases and that any risks associated with vaccination are outweighed by its benefits. Despite such assurances, a UNICEF study last year concluded that nearly a third of Ukrainian parents have a negative attitude toward vaccination.

Hlushko still feels nervous about vaccine safety. "I do vaccinate, but the same time I feel fear. You have to choose the lesser of two evils," she said.

Mainstream health professionals categorically reject claims made even by many Ukrainian doctors that vaccination is harmful.

"There is an information war which civilized medicine is losing e are sliding back into the caves," said Yevgeny Komarovsky, Ukraine's most famous pediatrician, who promotes vaccination in best-selling books and on his television show.

Some experts say the problem is not just psychology and inadequate funding. They contend that corruption at the Health Ministry causes vaccine shortages, saying complicated and opaque bidding procedures allow the ministry to purchase vaccines at inflated prices, pocketing kickbacks and leaving children without the shots.

Last year, Olivier Adam, then the United Nations Development Program representative, told the Ukrainian newspaper Dzerkalo Tyzhnya that vaccine shortages are due to "certain private interests" being taken into account during vaccine tenders.

In 2011, a U.S. Court ordered a U.S. company to pay the Ukrainian government $60 million after Ukraine's vaccine procurement agency alleged in a lawsuit that the American firm was involved in selling the agency vaccines often at twice the real cost.

Pricing information provided by the Health Ministry shows that many of the vaccines are procured at prices often more than three times those paid by UNICEF, which enjoys discounts as the leading vaccine buyer. The UN agency says it can help Ukraine purchase vaccines at its competitive prices; it also urges the government to improve its procurement mechanisms, including better forecasting national immunization needs so that no clinics go without vaccines and no vaccines go to waste.

The Health Ministry denies allegations of corruption, saying vaccines are procured in line with Ukrainian legislation "and the possibility of any kind of schemes is completely ruled out."

Revelations last year that the health minister's son co-owned a drug company that supplied the government with a vaccine that regulators found to have been produced unsafely also shook Ukrainians' trust in immunization and government healthcare.

While Bohatyryova denied that her family was involved with the company, public documents showed that her son held a 19 percent ownership stake and was on its supervisory board when she made that statement. Soon afterward, the son sold his shares and resigned from the board, and Ukraine's parliament launched an investigation into alleged financial misdeeds by the ministry in connection to the company.