Thousands of Muscovites took the well-trodden path to Bolotnaya Ploshchad on Wednesday to voice their opposition to President Vladimir Putin's 13-year rule.

While observers had thought that few would attend the "March Against Executioners," about 10,000 protesters took to the streets as the country celebrated the Russia Day national holiday.

Opposition demonstrators voice familiar grievances, including perceived persecution of Kremlin critics and a lack of rights for gays.

Protesters bellowed traditional slogans including "Russia without Putin" and "Putin is a thief," while others held aloft placards bearing the names and faces of 27 people facing jail for allegedly participating in violent clashes at an anti-Putin demonstration on Bolotnaya Ploshchad more than a year ago.

Investigators accuse the Bolotnaya suspects, who are seen as political prisoners in opposition circles, of physically assaulting law enforcement officers, rioting and plotting riots on May 6 last year. Those charges carry a maximum punishment of 10 years in prison.

On Wednesday, police detained about 10 protesters, mostly from the Left Front movement, for carrying flares and flags emblazoned with the logo of the banned leftist organization.

Opposition leader Alexei Navalny, currently standing trial in Kirov on embezzlement charges that his supporters say are fabricated, led a column of protesters to cries of "Navalny is our mayor." 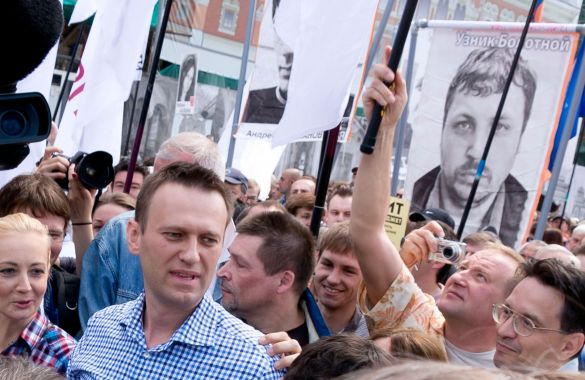 Navalny, second from left, marching next to his wife Yulia at the head of a column during Wednesday’s event. (Vladimir Filonov / MT)

On Wednesday, the liberal Republican Party — Party of People's Freedom unanimously backed Navalny as their candidate for Moscow mayoral elections scheduled for September.

As at previous opposition events, marchers voiced a host of grievances, including the perceived persecution of Kremlin critics, increasing discrimination against gays and insufficient support for Russian orphans.

"It upsets me that our government victimizes innocent people. By locking up the Bolotnaya activists, authorities want to scare us away," said Yury, a middle-aged engineer.

"The sad thing is that to a certain extent their tactics have worked. Many in my apartment building would have come, but they've lost hope that officials will listen to our demands," he said.

Attendance figures appeared to suggest that the stubborn protest movement has reached an impasse, with a determined core of activists continuing to frequent opposition events, but in far fewer numbers than in May of last year, when public anger against Putin peaked at the start of his third term.

Russian officials have routinely accused anti-Kremlin protesters of being in the pay of Western powers and criticized them for failing to present any constructive platform for reform. In comments broadcast on a state-run TV channel on Tuesday, Putin accused U.S. diplomats of openly sponsoring opposition protests.

But Alexander Golovko, a math student at Moscow State University, said that ongoing opposition to the authorities stemmed from a realization among ordinary Russians that it is their job to influence the Kremlin's course.

"The early protests stirred a sense of civic responsibility — they forced people to wake up," he said, adding that he had recently joined a vote-monitoring group as a volunteer. "Now the protest movement is entering a new phase, and we won't be silenced."

leave the past behind