Ordinary Russians reacted with a mix of compassion, skepticism and indifference to Thursday's announcement that President Vladimir Putin and his wife Lyudmila would divorce after 29 years of marriage, the first time a Russian leader has dissolved his marriage in over three centuries.

"Honestly, it's a circus, it's funny, and the news didn't evoke anything except irony," said Maxim Volkov, a 28-year-old manager, walking briskly through a neighborhood park in central Moscow.

The Putins' marriage was long rumored to have been on the rocks. Lyudmila's public appearances have become increasingly infrequent in recent years, and speculation has abounded about Putin's alleged romantic ties to Alina Kabayeva, 30, a former Olympic champion gymnast who became a State Duma deputy from the pro-Putin United Russia party in 2007.

Tatyana Knyazeva, 47, a nanny, said someone close to Putin's entourage told her 10 years ago that the first couple was not living together. "Why are they telling us about it now? We've all known everything for a long time," she said, sitting on a park bench, gently rocking a baby carriage.

The Putins told state-run Rossia 24 TV that the demands of Vladimir's work had driven them apart.

"We practically don't see each other. We have our own lives. … I don't like publicity, and airplane travel is hard for me," Lyudmila Putina told a reporter after a ballet performance at the State Kremlin Palace, her husband standing by her side.

But that's nonsense, Knyazeva said. "By their logic, the prime minister should divorce his wife too! Of course, that's not the real reason. Everybody knows the truth, but they keep quiet," she said.

There have been hints of strain in the marriage, however. In a rare interview with three Russian newspapers in 2005, Lyudmila said her husband worked too much and never asked for her advice.

"Perhaps it's because I might start to thrust my opinion on him," she said, adding that although he "probably" takes her opinions into consideration,"He never says to me, 'Look, I took your opinion into consideration.'" Changing his mind on any issue "only occasionally works a little bit," she said.

Lyudmila suggested that she and the Putins' two daughters, Maria and Yekaterina — now in their late 20s — had to work hard to get Putin's attention. He comes home just before midnight, she said, and if you want to talk to him, you must wait at the table where he drinks his evening kefir.

"It's no secret that he has long devoted himself to his country, as pretentious as that sounds," Putin's spokesman Dmitry Peskov told Lifenews.ru. In a separate interview Peskov said Putin's life "is in no way connected to any familial relations. It's connected only to his obligations."

Marina Solovyova, a psychologist who does family counseling, said the first couple proved incompatible because Putin is a mover and shaker, while Lyudmila is passive and camera-shy.

"He's ambitious, he sees himself as full of strength and confidence. He wants a life partner who will support him and travel with him and project his image. … I support and welcome his position. Our president should be inspired, ambitious and full of strength and energy," she said by telephone on Friday. 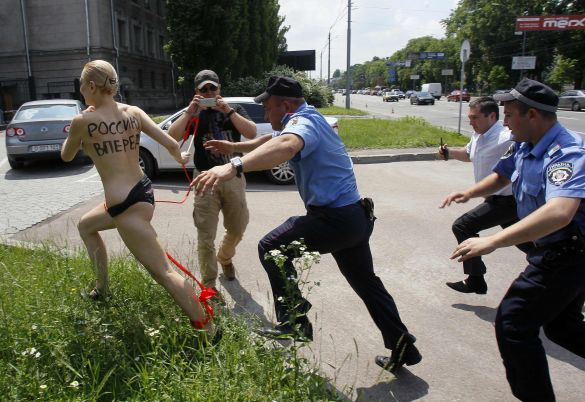 A Femen activist fleeing security near Kiev’s Russian Embassy as she stages a stunt for the Putins’ divorce. (Gleb Garanich / Reuters)

Putin is the first Russian leader to annul his marriage since Peter the Great in 1698, but he's the third leader of a major European country to do so in recent years. French President Nicolas Sarkozy split from his wife Cecilia soon after his election in 2007, and Silvio Berlusconi — playboy and Putin friend — got divorced in 2010 when he was still prime minister of Italy.

Alexander Dobrovinsky, a high-profile lawyer who has worked on the divorces of the super-rich, said the Putins' divorce appeared to be as amicable as one could hope for. The first couple seem to have reached a divorce agreement, meaning they won't have to go to court.

Problems occur when divorcing couples can't agree on money and children. In the Putins' case, their daughters are legal adults, and although Putin is rumored to be much wealthier than his humble assets declarations suggest, Vladimir and Lyudmila said their divorce would be "civilized."

"It makes me happy, because once again we've seen that we have a president who's an absolutely normal person, like everybody else. … It's wonderful that they said it openly. I simply tip my cap to them,"  Dobrovinsky said by telephone on Friday.

Peskov said on Thursday that the Putins had not yet filed for divorce. But just as he entertained questions about Putin's love life — no, there is not another woman, and talk of a presidential wedding is probably just "rumors and gossip," he said — Peskov made clear that his boss's private life, and that of his soon-to-be ex-wife, would continue to be off-limits to the public.

Putin's private life is seen as a taboo subject in the Russian press, a perception that was strengthened by the closure of the Moskovsky Korrespondent newspaper in 2008 shortly after it reported that Putin planned to marry Kabayeva. The paper's parent company cited "financial reasons."

Complaints of censorship also accompanied news of the divorce. Vladislav Sorokin, a presenter on state-run Public Television, wrote on Facebook that an episode of his show "Social Network" featuring a mock online dating profile for the president was abruptly pulled off the air.

The station's head, Anatoly Lysenko, denied the allegation, saying that the episode wasn't aired for technical reasons. "It's all a lie, we didn't close anything. … Why don't these guys stop lying and trying to portray themselves as heroes," he said, RIA Novosti reported on Saturday.

Public Television, which hit the airwaves in mid-May, was proposed by then-President Dmitry Medvedev as a neutral alternative to other Kremlin-friendly state channels weeks after massive protests broke out in December 2011 over State Duma elections widely seen as marred by fraud.

Political analysts polled by Slon.ru gave varying assessments about whether the divorce would hurt Putin's approval rating in largely conservative Russia, but none said it would make a significant dent, and at least one said it would actually improve the public's view of him.

"People love the truth. An honest divorce is better than rumors behind his back. And Russians are tolerant of divorces," political analyst Konstantin Kalachyov said.

Russia has one of the highest divorce rates in the world, and 700,000 Russians divorced in 2009, according to UNICEF.

It's unclear what awaits the soon-to-be former first lady. Peskov said he doesn't know her plans, or even where she will live. Her wishes for Vladimir, however, are somewhat clearer. Asked in the newspaper interview what she wanted her husband to be after his tenure as president ends, she answered with two words:

The Kremlin dismissed the reports of default.