A state-funded Olympic-themed art exhibit in Perm featuring a fanged Josef Stalin in a polar bear costume, among other images, has incurred the wrath of Moscow officials and was moved to a closed exhibition space after they complained.

The scandal broke at the White Nights arts festival in Perm, where the city's Museum of Modern Art exhibited a series of satirical posters on the 2014 Sochi Olympics by artist Vasily Slonov.

The posters, depicting an array of traditional symbols of Russia in dark guises, drew indignant condemnation from Perm officials after Wednesday's Olympic Torch Relay brought young athletes face to face with a poster depicting, as one unidentified official told news site Znak.com, "a giant, scary bear symbolizing the Olympics, his genitals hanging between his legs, preparing to stomp on a pair of figure skaters" under the heading "Welcome! Sochi 2014."

A vampiric Stalin, an Olympic-ring noose and other parodies of Russian and Olympic imagery enrage government officials.

Other posters in the series include Josef Stalin with fangs in a polar bear costume, a matryoshka-doll-shaped grenade, and an ax chopping down birch trees with blood oozing out.

"Children from all over the region are coming out to this sporting event, and this beast [the exhibit organizer] has given the Olympics this kind of context! The picture with nooses made from the Olympic rings is especially interesting," one Perm official said in comments carried by Ura.ru.

"This doesn't happen to me too often. In my own native city, in broad daylight, they are displaying things that even our nation's most hardened enemies wouldn't openly show," Klimov said.

The works on display represent "yet another cultural provocation" reminiscent of "what Hitler's propaganda henchmen used to come out with," he said. 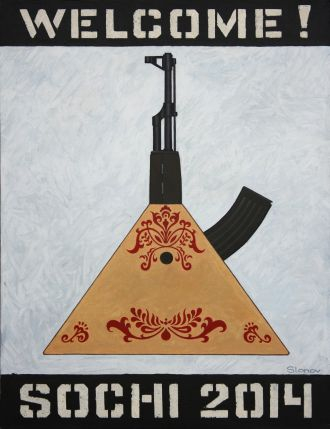 A poster with a kalashnikov shaped like a balalaika. (White Nights Art Festival)

As official outrage boiled over, it emerged that the pictures had been moved to a closed venue. Yelena Oleinikova, who is responsible for exhibitions at PERMM, attributed the move to the "impossibility of guaranteeing the work's safety in the planned exhibition space."

Grigory Kuranov, who represents Perm in the State Duma, said the exhibition was unprecedented.

Calling Russia's hosting of the games a "glorious victory" and an "honor," he told the Zvezda newspaper: "And what do we see in Perm? A contemptuous, derogatory attitude toward the success of our country, a great nation. I recognize the right of all creative people to self-expression, but not on the government's tab."

Blame has been showered both on Marat Guelman, the prominent gallery owner who organized the exhibit as part of the "Cultural Alliance" project, and local officials who approved the project.

Kuranov put most of the blame on the Perm administration, however.

"Everybody's trying to put the blame on Gelman, but let's call a spade a spade: There's the regional administration, the government, the governor's administration, the organizing committee, the head of the organizing committee. If all these managers handed over complete control of a multimillion-dollar project to a gallery owner, then what function do they serve?" he said in comments carried by Novy Kompanion.

"A mockery of Russia's national achievements is being made with their approval," he said.

Government funding of the White Nights festival amounted to 254 million rubles ($8 million), according to Lenta.ru. Though the scandal broke immediately after the torch relay on June 5, the exhibition opened on June 1. It was organized with support from the Perm administration's culture department.