DMITROV, Moscow region — A white Chinese car sat under a tarp on the concrete floor, its front maimed by a ruthless collision with a heavy cement cube just meters away in a government testing center here.

The vehicle was a Haima crossover, a brand that wants to return to Russia later this year with a new model.

Crash tests are part of the suite of services at the Central Automotive Research Institute's test center, an organization that most automakers — both foreign and domestic — have to reckon with to bring their products to market.

The center sprawls over 2,500 hectares, a territory that test center chief Denis Zagarin believes is probably larger than any of its European counterparts.

Thriving car sales have both local and foreign manufacturers expanding their safety testing with the local institute.

Most of the center's customers are foreign manufacturers, both the established Western and Japanese companies and the emerging Chinese rivals, Zagarin said.

AvtoVAZ, the top Russian automaker, runs its own testing operation. The other domestic automakers account for about a third of the center's workload.

The vehicles coming in from China are increasingly safer, Zagarin said. He recalled that 99 percent of automotive products from that country failed tests on their first attempt when he took charge of the center in 2008.

"We simply turned them away," he said in an interview last month. "The percentage is improving now. They are fast learners."

In addition to several car models, some of the other Chinese vehicles that won approvals at the center have brand names like Higer, a bus producer, and Foton, which makes light trucks. The test results for the Haima were confidential.

The tests for Western and Japanese imports do not have to be as comprehensive. The vehicles have the benefit of being compliant on most counts because Russia, as a party to a 1958 Geneva treaty, recognizes approvals issued in their countries of origin. The treaty introduced uniform technical requirements for wheeled vehicles. 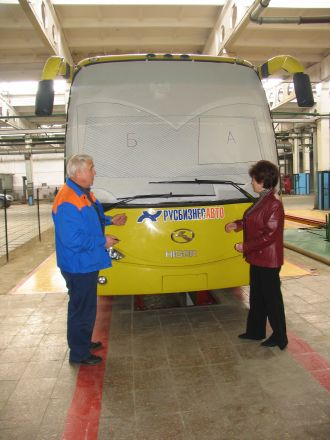 The test center's business with Chinese vehicle manufacturers, like the Higer bus company, has been picking up. (Central Automotive Research Institute)

But Russia also has several indigenous rules, including one that sets a permitted level of fumes in a car's interior — pollution that could emanate from the plastic or upholstering.

"These are Russian standards, which were developed with an eye to Russian operational conditions," Zagarin said.

A Toyota spokeswoman confirmed that the company used the test center's services to clear the way for imports. Last year, three Toyota models underwent the additional examination, she said. The number varies from year to year, and grew to four models in the first four months of this year, she said.

Foreign producers that set up production units in the country are another major source of revenue for the automotive center, Zagarin said. Once in a while, it assesses their output for conformity of production, or the ability to meet the original manufacturing standards.

One thing that the center's engineers examine during these assessments is the reliability of welding, which depends on such conditions at the plant as air temperature and humidity, Zagarin said.

"There were cases when welding points broke up," he said. "Or the locally sourced steel didn't prove to be of identical quality, causing it to wrinkle in stiffness tests." 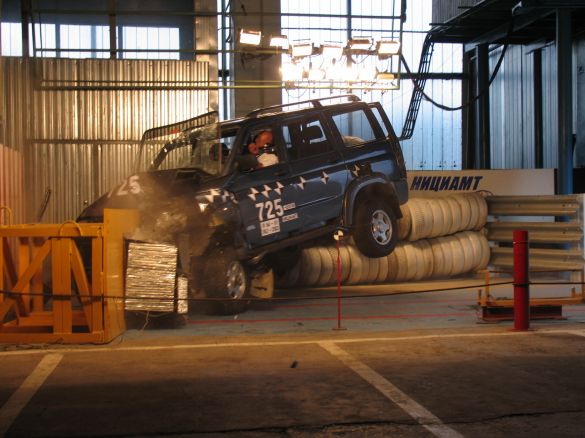 Vehicles of all types are subjected to punishing crashes to determine safety and reliability conformity. (Central Automotive Research Institute)

Contracts from Russian producers can stipulate a closer look at engines. LiAZ recently wanted to make sure they installed the foreign-made Cummings engines on their buses properly.

AvtoVAZ does work with Zagarin's center in some cases. It paid for a test of a prototype dual-fuel engine that could run on both gasoline and natural gas.The test is taking place as the government and Gazprom are leading a campaign to reshape the automotive fuel market by skewing it toward cleaner — and less expensive — natural gas.

It's not just cars that come under scrutiny at the center. Samara-based Prodmash submitted its bridge barrier for a test on a recent day last month. At a curve on a road at the facility, a large clunker of a bus slammed into the barrier at full speed, but didn't ram through it — a good sign for the company. What was left of the bus clattered alongside until coming to a halt.