The first preliminary hearing was held Monday in the trial of five men accused in the murder of investigative reporter Anna Politkovskaya, with lawyers for the accused demanding that their clients' case be heard by a jury.

Politkovskaya, who worked for opposition-leaning newspaper Novaya Gazeta and investigated human rights violations and crimes in Chechnya as well as corruption in the Russian government, was shot dead in the elevator of her apartment building in October 2006.

Investigators believe she was killed over her articles, which were often critical of the Kremlin's policies in the North Caucasus and of the leadership in Chechnya.

Top Russian officials, including President Vladimir Putin and Chechen leader Ramzan Kadyrov, have said that Politkovskaya's murder was an outrageous act of violence that struck at the freedom of speech and that it required a thorough investigation. But almost seven years after the killing, the ongoing inquiry has led to only one person being convicted, and investigators have still never charged anyone for masterminding the murder.

The court is required to grant them a jury trial, since Russian law guarantees murder defendants the right to be tried by a jury. Most cases in the Russian justice system are decided by judges.

Lawyer Anna Stavitskaya, who represents Politkovskaya's relatives at the trial, said by phone that she and her clients were glad it would be a jury trial.

"That's the best form for this case, as it will help to come to an unbiased judgment," she said, adding that the trial was likely to last for at least six months.

According to investigators, in 2006 Gaitukayev created an organized criminal gang that consisted of the Makhmudovs, Khadzhikurbanov and several other people, who allegedly planned and committed Politkovskaya's murder. 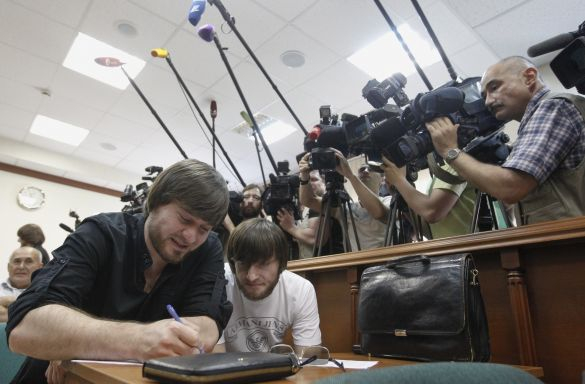 Investigators said that Dzhabrail and Ibragim tracked Polikovskaya and that Rustam Makhmudov shot her several times in her apartment building. They said Khadzhikurbanov organized surveillance of Politkovskaya.

Khadzhikurbanov and Dzhabrail and Ibragim Makhmudov were tried in 2009 and acquitted by a jury, but that ruling was overturned by the Supreme Court later that year. Rustam Makhmudov was detained in Chechnya in 2011.

Currently, three of the defendants — Gaitukayev, Khadzhikurbanov, and Rustam Makhmudov — are in detention, while Ibragim and Dzhabrail Makhmudov are under travel restrictions that prevent them from leaving the country.

Last year, former police officer Dmitry Pavlyuchenkov was sentenced to 11 years behind bars for conspiring to commit the murder of Politkovskaya. He pled guilty and said the five men now going on trial were involved in the crime.

He also said the murder was ordered by exiled businessman Boris Berezovsky, who died earlier this year in an apparent suicide, and exiled Chechen separatist Akhmed Zakayev.

All five of the suspects pled not guilty on Monday and said Pavlyuchenkov's testimony was false, Interfax reported. Pavlyuchenkov, who said he provided the group with information about where Politkovskaya lived, will participate in the trial as a witness for the prosecution.

Stavitskaya told Interfax that lawyers for the alleged murderers asked the court on Monday to return the case to prosecutors "to eliminate multiple violations committed during the investigation."

Moscow City Court judge Pavel Melekhin is expected to announce his decision on all the lawyers' motions on Tuesday, after which the court will begin to select the jury.

Overall smartphone sales in Russia fell by 30% compared with April-June 2021.
Pump the brakes

Russia’s Car Manufacturing Collapses by 97% in May

Russia manufactured 3,700 cars in May — 97% fewer than the same month last year.