A quarter of Internet users in Russia pay for services online, and 30 percent of them are from the Moscow region, according to an e-commerce market research sponsored by PayU Group.

A study, conducted in collaboration with Data Insight agency, showed that to date in 2013, 50 percent of online payments were done with a credit card, with an average amount of 2,800 rubles ($89). 58 percent of such payments came from cities with over 300 thousand residents.

The research showed that people under 35 were responsible for 61 percent of transactions, 56 percent men and 44 percent women.

"Every year, the number of Russians preferring online non-cash payments is growing with a faster rate," Pyotr Kozyakov, a sales director from PayU said. "With the introduction of high-speed [Internet] and quality [Internet] links in the regions, one can expect another boom in online payments," he added. 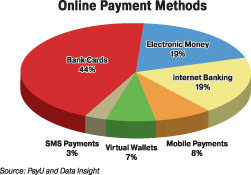 Every month, seven million Internet users in Russia made an average of 3.8 payments, research showed.

Despite the high rate of credit card use, Central Bank statistics show that people are still afraid to use plastic cards, Asya Melkumova, a spokeswoman from Yandex.Money, said Wednesday.

According to the Jan. 2013 data, cash withdrawals accounted for 83 percent of all banking transactions. The remaining 17 percent were payments made with a card.

The popularity of online credit card payments will grow — it is still low as compared to developed countries, said Maria Goryacheva, a spokeswoman from PayOnline, a company providing payment processing services to online merchants.

The number of fraudulent transactions will also increase, Goryacheva added, but if merchants opt for certified payment gateways and customers open separate cards just for the Internet, the possibility of fraud will be minimized.

Experts advise people against using their "main" credit cards for Internet purchases. Yulia Mansurova, a spokeswoman from Qiwi payment service, said virtual wallets or credit cards linked to these wallets were the safest way to shop online. They allow users to limit funds on card and reduce the risk of being duped.

For those who are concerned with privacy as well as security, virtual wallets are the safest way to pay online, Melkumova said. They leave no trace and cannot be copied.

New figures show October 2021 was the worst month since the start of the coronavirus pandemic.

Tensions have skyrocketed in recent weeks over accusations of Russian military buildup around Ukraine.
captive cetaceans

Almost 100 whales were released from the secretive facility after an intense campaign by animal rights and environmentalist groups.
contraband chachkis