The Defense Ministry grounded its Mi-8 helicopters after a crash killed one serviceman Tuesday, but the Kremlin said the ban would not stop President Vladimir Putin from testing out his new helipad.

"The ban applies to helicopters operated by the military," Putin's spokesman Dmitry Peskov told reporters in the Kyrgyz capital, Bishkek, where Putin was attending a security conference Tuesday.

An Mi-8 carrying a crew of three crashed around noon during a routine training flight near the village of Ivanovo in the Saratov region. The two pilots survived after bailing out in parachutes, but the onboard mechanic was trapped in the aircraft and died, Interfax reported.

Air Force commander Viktor Bondar grounded the military's Mi-8s during the duration of an investigation into the cause of the crash. Investigators suspect that pilot error was to blame for the incident.

Putin, who usually flies in Mi-8s for short hops, will not be affected by the ban because his helicopters are operated by the presidential property management department, not the military, Peskov said, Interfax reported. 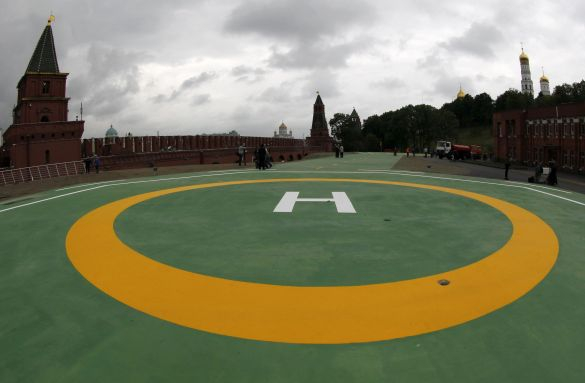 The helipad can handle Mi-8s as well as the Augusto Cicar ultralight helicopter and the Mi-8MTV heavy helicopter. (Sergei Karpukhin / Reuters)

Construction finished this month on a Kremlin helipad that will allow Putin to commute to work from his Novo-Ogaryovo residence outside Moscow without further snarling city traffic — and inflaming drivers' nerves — with his motorcade. Peskov, in announcing the completion of the helipad earlier this month, said that Putin would use it for the first time soon.

Putin hasn't had a chance to try it out yet. Aside from the trip to Kyrgyzstan, Putin has been staying at his residence in Sochi as part of a working vacation.

The helipad, a vast green circle within the Kremlin walls, was built to handle Mi-8s as well as the Augusto Cicar ultralight helicopter and the Mi-8MTV heavy helicopter, Vladimir Kozhin, head of the presidential property management department, said told reporters on May 17. But it is expected to mainly handle regular presidential Mi-8s. 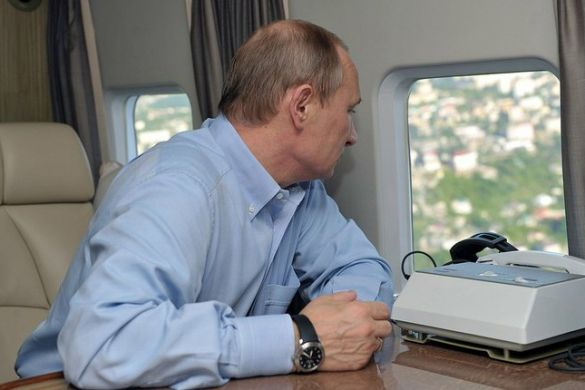 President Putin inspecting construction for the Sochi Olympics from a presidential Mi-8 earlier this month. (Kremlin.ru)