The U.S. Embassy employee accused of spying in Moscow has flown out of Russia five days after he was ordered to leave the country, NTV television reported.

The Kremlin-loyal TV station broadcast video footage on Sunday evening showing Ryan Fogle going through passport control and security at Sheremetyevo Airport. He also was pictured in the company of embassy staff as he wheeled a suitcase into the Moscow airport, which is used by Delta Air Lines for its direct flights to New York.

The Federal Security Service announced last Tuesday that Fogle, a 29-year-old third secretary in the U.S. Embassy, had been caught trying to recruit a Russian counterterrorism officer. Fogle, who was accused of working for the CIA, was widely shown on state television wearing a blond wig.

In a move widely seen as a breach of protocol in the intelligence community, Russian authorities on Friday released the name of an individual whom it said was the Moscow station chief for the CIA as of late 2011. 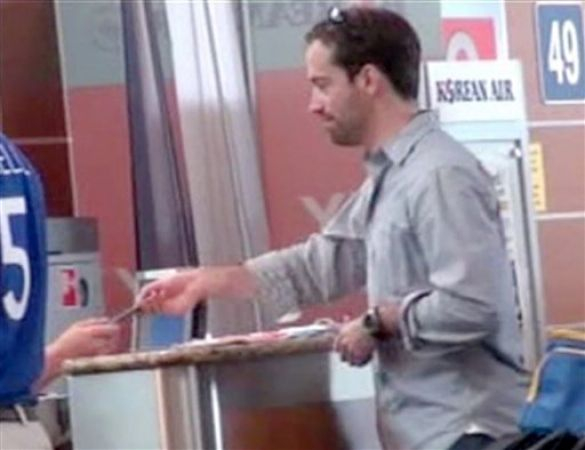 Fogle going through passport control in a Moscow airport on Sunday. (AP)

The U.S. Embassy has refused to comment on the case.

The attention given to the Fogle case in Russia contrasts with recent moves by Washington and Moscow to develop closer cooperation on counterterrorism in the wake of the Boston Marathon bombing on April 15.

The bombing suspects — Dzhokhar Tsarnaev and his elder brother, Tamerlan, who was killed by police — have roots in Chechnya. Tamerlan spent six months last year in neighboring Dagestan, now the center of an Islamic insurgency, and U.S. investigators have been working with the Russians to try to determine whether he had established any contacts with the militants.

Little is known publicly about Fogle's duties and activities in Russia.

The U.S. State Department confirmed that Fogle worked as an embassy employee but would give no details about his job. The CIA declined comment.

Material from RIA Novosti is included in this report.