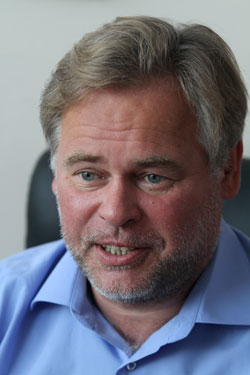 WASHINGTON — Kaspersky Lab, the Russian antivirus software maker, plans to open an office in the Washington area to spearhead sales to the U.S. government, a bid to offset slowing demand for its programs for consumers.

Kaspersky makes one of the top-selling antivirus programs in the United States, where it has gained market share in recent years against products from Symantec Corp, Intel Corp's McAfee and Trend Micro Inc.

Yet the Moscow-headquartered company has struggled to make inroads with the U.S. government, one of the world's largest buyers of technology products. Security experts say that the U.S. government typically avoids Russian products out of concern they could have hidden functions that might allow Moscow to penetrate U.S. networks.

Eugene Kaspersky, the company's co-founder and chief executive officer, told the Reuters Cybersecurity Summit that his programs had no such hidden functions. But he said he would build products aimed at the U.S. market to assuage any concerns.

Kaspersky said he would hire U.S. citizens to work in the new office and write, test and compile computer programs.

The company already has a regional headquarters in Woburn, Massachusetts, and an anti-virus lab in Seattle, but does not produce software in the United States.

The new U.S. team will work on an operating system for computers that control electric generators, water systems, factories and other industrial facilities.

Kaspersky said the company was almost ready to test an early version in Russia. He said he hoped the industrial control software would one day account for about a third of its sales.

As global sales of personal computers decline, Kaspersky Lab wants to diversify its portfolio away from PC anti-virus software. Last year global PC sales posted their biggest decline in more than two decades, hurt by a shift to tablets and smartphones.

Kaspersky said falling consumer sales last year crimped overall revenue growth but did not elaborate. The company still has positive revenue growth when sales to businesses are included "but it's a little bit close to flat," he said.