A large family from a Far East village that shot into the spotlight during a televised call-in show with President Vladimir Putin received on Wednesday the keys to a bus promised by Primorye Governor Vladimir Miklushevsky.

The 15 children in the Kuzmenko family, including 12 who are adopted, will now be able to leave their village of Novoshakhtinsk and go on a vacation together, the father, Sergei Kuzmenko, told Interfax.

The mother, Yelena, said the family would take a trip in the 19-seat Volkswagen bus around the Primorye region, including a stop in the village of Lazo, which sits on the confluence of three rivers.

"The children are happy, they still cannot believe that it is our car," she told Komsomolskaya Pravda. "In June the water is warmer, so the whole family can go on a vacation to the village of Lazo, where we have relatives. After, we can show the children all of the Primorye region."

The mother also thanked Putin for his attention to adopted children and for the large bus from the governor. "This should be an example to other families who adopt children. It's hard but rewarding work," she said. 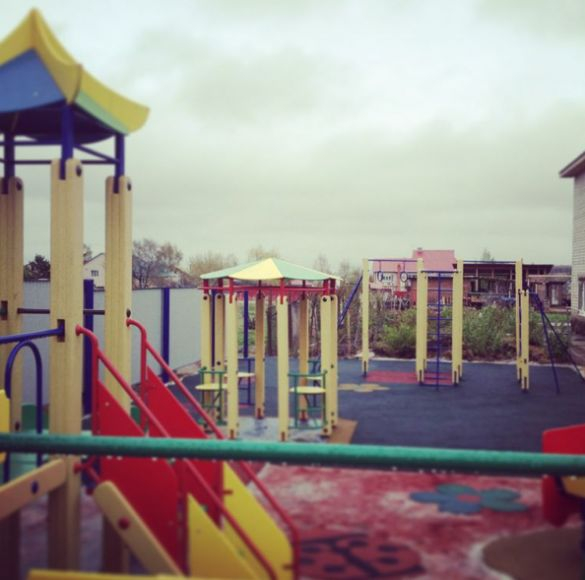 The playground that was built at breakneck speed for the Kuzmenko family. (Primorye administration)

She quizzed Putin during his Q&A show on April 25 about state benefits for large families, and one of her daughters asked Putin for a playground. The president ordered that the girl's request be fulfilled.

Word came back while the nearly five-hour Q&A session was still going on that the order for the playground had already been received by the local administration. A few days later it was built and ready for use.

Governor Miklushevsky, in presenting the new bus Wednesday, said that the gift would not be a one-time act of assistance but part of ongoing measures to support families that adopt children.