Turkmen President Gurbanguly Berdymukhammedov fell off his horse just after he crossed the finish line in first place in Ashgabat this week — and then tried to cover up the tumble by forcing spectators to delete all evidence of the incident.

But the New York-based news portal EurasiaNet.org obtained footage of the president's bad spill, and it paints a drastically different picture of the April 28 race than that portrayed by state media.

Berdymukhammedov won the $11 million purse when the horse he was riding won by about a length and half at the racetrack — a fact trumpeted by the former Soviet republic's tightly controlled media.

But the leaked video footage shows that the horse then stumbled and Berdymukhammedov flew over its shoulders. The other horses barely missed trampling the motionless president.

A group of men in black suits swarmed onto the track and, after a few moments, an ambulance pulled up and whisked away the apparently unconscious Berdymukhammedov.

About an hour later, a stiff-looking Berdymukhammedov returned to the event and waved to the cheering crowd, indicating that he was well. 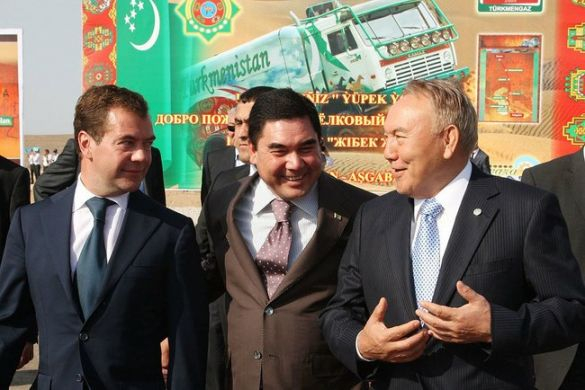 During the hourlong interval, Berdymukhammedov's security detail went through the crowd, which included members of top international equestrian clubs invited to attend the event on an all-expenses-paid junket, and forced them to delete videos and photos of the incident, EurasiaNet.org reported.

Law enforcement officials also searched passengers flying out of the Ashgabat airport, seizing mobile phones, tablet computers, laptops, cameras and any other devices that could be used to record the fall, Fergana news agency reported.

The independent Turkmen portal Chronicles of Turkmenistan, which first reported the fall, has been paralyzed by a DDOS hacker attack, it said.

Turkish state media touted Berdymukhammedov's win as a photo-finish event and made no mention of what happened moments later.

EurasiaNet.org did not say how it obtained the video.

The race was part of an annual four-day festival celebrating horses in Turkmenistan, an oil-rich Muslim country where the president has a cult-like status and shows little patience for dissent.

Putin added that the U.S. is “attempting to prolong” the war in Ukraine and spread “chaos” by provoking conflict between China and Taiwan.
black smoke

Three Britons, one Swede and a Croat could face the death penalty in Donetsk.