SOCHI — The problems on Ruslan Zokhidov's mind are not typical for a young man of his age: he is the least likely person to be found nattily dressed at a trendy night club or entering a university lugging a pile of books.

Instead, Zokhidov, 19, lugs building materials and wears rubber boots for his job as a construction worker at one of the sites in Sochi preparing to host Winter Olympics next year.

In late December, he came from his native Jizzakh in Uzbekistan to the Black Sea coast city with his father Parmon to build a hotel complex that will house International Olympic Committee officials.

The family had been encouraged to take the trip by their fellow townsman who had arrived earlier and persuaded them that the booming construction ahead of the world's biggest sport event was a good chance to make some cash.

But disappointment came faster than the highly awaited money, with the would-be rewarding job having left the Zokhidovs, as well as dozens of other migrant workers, humiliated and without a single ruble to live on.

"I came to earn a little money, a friend called us to a good place, but the place turned out to be not good at all," said Parmon Zokhidov, 42.

The Zokhidovs and other migrant workers employed at the construction of the Main Olympic Village, a stone's throw from the sea, told a Moscow Times reporter in Sochi last month about numerous violations by one of the subcontractors, Moscow-based company Rai, which is the Russian word for "heaven."

Some contracted building firms are shortchanging workers in the rush to complete billions of dollars of construction.

The builder, they said, had repeatedly failed to deliver on its contractual obligations. Over the three months that the father and son had been working in Sochi, they got paid only once, but the modest salaries turned out to be even smaller than agreed initially.

The Zokhidovs said their employer had cited shortage of money to justify delays in paying wages. The price tag for Sochi Olympics has reached 1.5 trillion rubles ($47 billion), making them the most costly in the Games history, according to the estimates by the government. The lion's share of those funds, which include expenditures on sports facilities and city infrastructure, will be contributed by the private sector, Deputy Prime Minister Dmitry Kozak who oversees preparations said earlier this year.

Ruslan Zokhidov said his January salary had totaled only 15,200 rubles ($475) and had been calculated based on a rate of 65 rubles per hour instead of 80 rubles stipulated in his contract. A work day at the construction site lasts for 10 hours.

As of the end of March the Rai construction company owed Ruslan Zokhidov 31,000 rubles and the same amount to his father, he said. Representatives of the firm also withheld the workers' passports, "so we couldn't escape," and failed to provide work permits and copies of work contracts, Zokhidov-junior said.

Numerous calls to the Moscow office of Rai went unanswered. When reached by mobile phone last week, a man named Mustafa and identified by the construction workers as the company representative with whom they deal, did not provide any explanation and said that he "doesn't even know of such a firm," without elaborating.

He also did not show up at the construction site last month to meet with journalists and dozens of disgruntled workers demanding wages.

Tired of dashed hopes, the Zokhidovs decided to terminate their employment contracts, but they said they would not leave without getting their salaries paid to them.

"To be honest, I want to go home... I can't stand this anymore," Parmon Zokhidov said. "But how can we return home without a single kopek after three months of work? It's a shame," he added bitterly, in broken Russian.

In Jizzakh he left his wife, a Ukrainian native, and two daughters, who are being supported by his elderly parents. Zokhidov-senior said he and his son had run out of money and could not even buy food for themselves.

"We eat what the guys bring us," he said referring to fellow migrant workers. "We have some bread and tea, and that's it," he said.

Although the employer provides free food to workers, Parmon Zokhidov said it was inedible. "The food has no taste at all, it's impossible to eat it, we have to throw it away," he explained, making frequent pauses as his speech got interrupted with severe cough.

Parmon Zokhidov said when he caught a cold he did not get proper medical treatment, and neither did other workers who had fallen sick.

The Zokhidovs were among 100 other migrant workers — originating from the CIS republics, Dagestan and Turkey — who had decided to terminate their employment contracts and demanded that the employer pay its debts.

The case of Parmon Zokhidov and his son is just one example of massive cheating of migrant workers employed at the Olympic construction sites in Sochi, with dozens of similar violations being revealed by Human Rights Watch earlier this year.

In its 67-page report called "Race to The Bottom" that was issued in early February, the human rights organization described the "abuse and exploitation" of migrant workers in Sochi — the picture sharply contrasting with the state-of-the-art facilities that the Games visitors will enjoy next year. 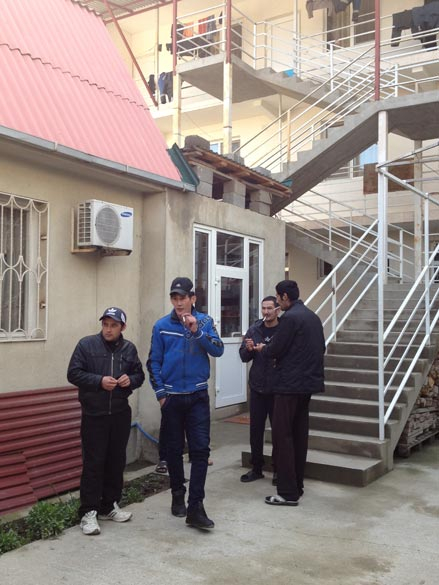 The document confirms that the kind of abuse described by the Zokhidovs is widespread: employers at the construction sites tend to delay payment of wages or don't pay them at all; they also confiscate the workers' identity documents like passports and work permits, require excessive working hours while providing little time for rest and fail to provide adequate housing and meals.

The report is based on interviews with 66 migrant workers who were or had been previously employed at construction sites of buildings and infrastructure for the upcoming Winter Olympics. The workers hailed from Armenia, Kyrgyzstan, Serbia, Tajikistan, Ukraine, and Uzbekistan.

According to the document, most of the interviewed migrants were employed at the venue near the coast, which includes facilities like the main Olympic stadium set to host the Games' opening and closing ceremonies, a few ice arenas, the Main Media Center and a hotel complex for the International Olympic Committee. The second Olympic venue is located in the mountains, near Krasnaya Polyana settlement.

The interviewees told Human Rights Watch that "their conditions and experiences were similar to those of larger groups of workers" with whom they worked or shared accommodation, the report said.

The organization recommended in the report that the government "rigorously investigate and prosecute" companies violating the rights of the migrant workers and create effective mechanisms for employees to complain about those violations.

The rights of migrant workers employed at the Olympic construction are being violated because of  a lack of proper regulation and control by federal authorities, said Semyon Simonov, a Sochi-based coordinator for migration issues at human rights center Memorial. He added that Olimpstroi, the state-owned company overseeing Olympic construction, should also intervene, since it "has all necessary resources" to resolve the problems between migrant workers and their employers.

According to the report by Human Rights Watch, the state corporation had been informed about the violations uncovered. But Simonov said that Olympstroi officials had told him that they would not intervene in relationships between subcontractors and migrant workers.

The state corporation claimed that it had carried out more than 1,300 checks at Olympic construction sites in 2011 and 2012 and continues to cooperate with the regional branches of the federal labor watchdogs to reveal possible violations.

Olimpstroi said it had received only five complaints about problems with salary payments over the last two years and that employers had fulfilled their obligations in full following an inspection by the state company.

"Any employee thinking that his rights have been violated can … file a complaint," Olimpstroi said in e-mailed comments, adding that its contacts, as well as those of the regional prosecutor's office, the labor watchdog and the Federal Migration Service, are available at construction sites.

Human Rights Watch said it had sent three letters to Austrian construction giant Strabag in 2011 and 2012, outlining concerns about the working conditions of migrant employees, but no response from the company followed.

Strabag is a general contractor at the construction of the Main Olympic Village where the Zokhidovs were employed, with the company's banner displayed at the site where the hotel complex being built.

Two years ago, Strabag officials met with Human Rights Watch representatives "who informed us about the "payment policies" of some construction companies in Sochi," Strabag spokswoman Paula Rys said in e-mailed comments.

"At that time, there were no problems with our subcontractors, but we had an eye on the matter," she said.

Although denying violations concerning wage payments and passport confiscations from the workers employed by Strabag directly, Rys acknowledged that the rights of migrant employees had been abused by some of its subcontractors over the last "couple of months" and that the construction giant had been informed by Sochi authorities about those violations.

"In the immediate term — and not only since we were informed by the local authorities — we are actively working to counter these unfair practices by offering to subcontractors that are in financial difficulty that we pay their invoices to us more frequently than required, to make sure they are solvent enough to remunerate their workers in time," Rys said.

She also added that those firms get blacklisted for future projects by Strabag, "so that it is guaranteed that they do not work with us again."

Optimism of the East

The Zokhidovs were lucky. They got new construction jobs in Sochi after extracting part of their salaries from the previous employer, Rai, while many other workers who had been employed by the firm are still waiting for their wages.

Despite the months-long struggle, Ruslan Zokhidov is optimistic about the future and believes that other employers will be more honest.

"We'll work here for another year or two and then return home. The time will be right to get married," the 19-year old said.

Ruslan said he hopes to save up his wages to build a house for himself and his future wife in his native Jizzakh and organize a wedding ceremony. "One can organize a good wedding for what we'll earn here," he said.

Asked whether he has a girl friend, the younger Zokhidov was confident: "There are many girls around, I'll find one."