A rock-like object that crashed from the sky into a Novosibirsk sidewalk and frightened residents is not a meteorite but might be a piece of space junk, emergency officials said Friday.

After the recent fall of a meteorite over Chelyabinsk, residents of the Siberian city thought they had received another parcel from outer space when local media reported the discovery of the object outside a building used by the Russian Post.

Eyewitnesses said they saw it fall from the sky, RIA-Novosti reported.

No one was injured. But the object, measuring roughly 5 centimeters by 4 centimeters, left a small crater in the sidewalk where it landed.

The Emergency Situations Ministry released blurry photos of a metallic-looking rock next to a ruler. 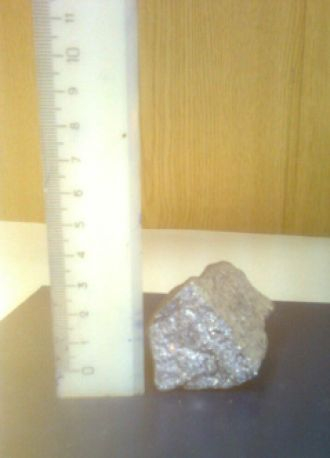 The rock is man-made and possibly from a satellite, researchers said. (Photo: Emergency Situations Ministry)

Scientists and investigators from the Emergency Situations Ministry who were dispatched to the impact site determined that the object was of earthly origin and said it might have come from a former satellite or some other space junk that had re-entered Earth's atmosphere.

Nikolai Podgornykh, head of the Central Siberian Geology Museum, said the object appeared to be made of silicon or a related alloy.

Scientists will provide a final conclusion on its composition after conducting additional laboratory tests.

Preliminary tests have not detected any danger to humans, the Emergency Situations Ministry said in a statement. 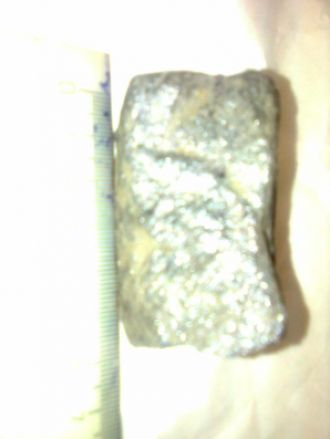 Additional lab tests are being conducted on the rock. (Photo: Emergency Situations Ministry)

A meteorite exploded above the Urals city of Chelyabinsk in February, creating a fireball that shattered windows and frightened residents. More than 1,000 people were treated for minor injuries, mostly caused by flying glass.

Deputy Prime Minister Dmitry Rogozin has called for the formation of a radar monitoring system that would detect future threats from space and provide people with sufficient warning.

Talks with the U.S., NATO and OSCE on Moscow's security demands failed to reach a breakthrough last week.
'not a realistic option'