Fall 2006, Tamerlan Tsarnaev enrolled as a part-time accounting student at Bunker Hill Community College in Boston. He took classes for only three semesters — fall 2006, spring 2007 and fall 2008. "He wasn't even close" to getting a degree, said Patricia Brady, a spokeswoman for the college.

May 2009, Tamerlan Tsarnaev competed in the Golden Gloves National Tournament of Champions in Salt Lake City, Utah. He lost his first bout.

July 2009, Tamerlan Tsarnaev was arrested after a woman identified as his girlfriend accused him of domestic abuse, a charge that was dismissed at a jury trial in 2010.

Sometime in 2009, Ruslan Tsarni, an uncle of the brothers, told CNN he first noticed a change in Tamerlan Tsarnaev's religious views. He said the radicalization of his nephew happened "in the streets of Cambridge."

2009 or 2010, Tamerlan married Katherine Russell, whose family lives in an upper middle-class neighborhood in North Kingstown, Rhode Island. Her father is licensed as an emergency room physician. The couple have a child named Zahara.

2010, The Comment, the graduate student magazine of Boston University's College of Communications, ran a photo spread of Tamerlan Tsarnaev training at a boxing gym. He told the magazine "I don't have a single American friend. I don't understand them." He also said he abstained from drinking and smoking: "God said no alcohol."

Early 2011, Russia's Federal Security Service, or FSB, asked the FBI to investigate Tamerlan Tsarnaev out of concern that he had embraced radical Islam and was going to travel to Russia to join unspecified radical groups. The FBI interviewed Tsarnaev and his family members and examined his travel and Internet records. 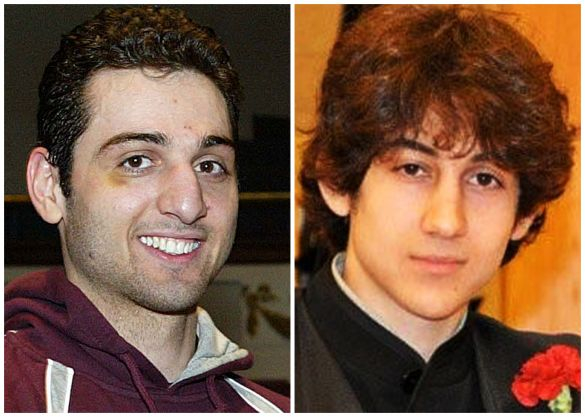 Spring 2011, Dzhokhar Tsarnaev graduated from Cambridge Rindge & Latin School. He was an all-star member of the wrestling team and won a $2,500 scholarship from the City of Cambridge. Friends and acquaintances remembered him as cheerful and wanting to fit in, an "all-American kid in every measurable sense of the word."

Summer 2011, The FBI informed the FSB that it "did not find any terrorism activity, domestic or foreign" in its investigation into Tamerlan Tsarnaev. A subsequent FBI request for more cooperation and clarifying information from the FSB went unanswered. Both of Tsarnaev's parents told Russian television networks that the suspected bomber believed he was under continued FBI surveillance.

September 2011, Three men, including one who was a close friend of Tamerlan Tsarnaev, were fatally stabbed in the neck in an apartment in Waltham, Massachusetts. Authorities are investigating whether Tsarnaev had any connection to the unsolved triple homicide. At the time of the stabbings, the local district attorney's office said it appeared that the victims knew their assailants and that the attacks were not random.

January 2012, Tamerlan Tsarnaev departed the United States for Russia for a six-month visit. For at least a month in the summer, Tsarnaev helped his father renovate his first-floor apartment next door to a dental office in Makhachkala, a city in Dagestan on the Caspian Sea. It was unclear what else he did while he was in Russia, whether he traveled elsewhere and whether he met with any members of radical groups. "They say he was a fanatic. I didn't see that," a neighbor of Tsarnaev's father said.

September 2012, Dzhokhar Tsarnaev was sworn in as a naturalized U.S. citizen. Tamerlan Tsarnaev applies for U.S. citizenship. Because of the previous FBI inquiry into his activities and the prior domestic abuse complaint against him, Tsarnaev's application prompted "additional investigation." He was still under consideration for citizenship at the time of the April 15 bombing.

November 2012, Tamerlan Tsarnaev interrupted a sermon at the mosque of the Islamic Society of Boston to object to a preacher's call for Muslims to celebrate holidays like July 4th and Thanksgiving just like the birthday of the Prophet Muhammad.

The meeting comes amid Washington's hopes for support to continue surveillance of extremists in Afghanistan.
upward trend

The Delta variant now accounts for 100% of all new infections, a top official said.
shots fired

Gunmen opened fire on a car carrying one of the Ukrainian president's senior aides in what officials described as an assassination attempt.
no trace

Reports said the plane with six people on board is believed to have crashed in a nature reserve outside Khabarovsk.