Fetisov, whose fortune is estimated at $1.3 billion by Forbes magazine, made his money in the telecommunications business before being elected to the Federation Council in 2001. He was a member of the parliament's upper house until 2009.

He is a co-owner of banking group Moi Bank and a shareholder of Altimo, Alfa Group's telecommunications division. 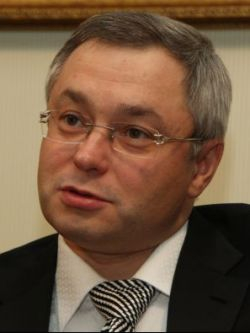 The senator's plan to run for governor in the Moscow region was revealed by a friend of his, Forbes reported.

The Moscow region is currently run by United Russia heavyweight Andrei Vorobyov, a former businessman who co-owned a fishing company before becoming a politician.

Fetisov declined to speak about his plans, but said that his Green Alliance — People's Party is planning to field a candidate for the upcoming elections.

One of the party's leaders is former environmental official Oleg Mitvol, known to have ties to the Kremlin. Mitvol ran in the October 2012 mayoral election in the Moscow region city of Khimki and was accused of being a spoiler for local opposition leader Yevgenia Chirikova.

Fetisov, who kept a low profile while in the Federation Council, has recently become more active in politics.

In November he co-wrote a report with left-leaning economist Sergei Glazyev, advocating modernization of the Russian economy by means of building new manufacturing industries from scratch.

They argued that the pervasiveness of offshore entities was a threat for Russia. President Vladimir Putin called for a "de-offshorization" of the economy in his state-of-the-nation address in December.

In December, both Fetisov and Mitvol wrote an open letter to Putin, asking him to reshuffle the Cabinet and fire Prime Minister Dmitry Medvedev.