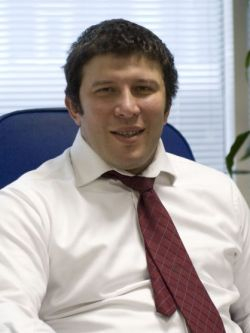 Russia's stock market evolution is difficult, but the progress is unpreventable. It is reflected in the changing composition of Russia's benchmark MSCI Standard index, which spans 90 percent of Russia's market cap. MSCI Standard is the index that serves as a benchmark for almost all of Russia's institutional investors. Investors invest in stock of MSCI Russia, and their game is to underweight or overweight certain stocks that they feel have more potential or less potential, to achieve better returns than the benchmark itself.

So glancing back, you see initially only 10 stocks in the beginning of Russian market in 1998 in the MSCI Russia index. The first big change occurred in 2002 when Yukos was added to the index as yet another Russian blue chip. Yukos' stock jumped 30 percent on the back of the news that it had been included. Emerging market fund managers rushed to mirror the index move to add stock to their funds. It did turn out as a disaster to them when shares of bankrupt Yukos were removed from the index in 2005. It also caused a few very bright heads to roll as some respectable fund managers lost their jobs as punishment for investing in Yukos.

Then on May 18, 2005, ironically exactly on the day when Khodorkovsky was found guilty in Russian court, eight new stocks were added to the MSCI Russia index. Those stocks included Transneft Pref,  Nizhnovsyazinform, SouthTelecom, Tatneft, Wimm-Bill-Dan (IPO in 2002), MTS (IPO in 2000) and  VimpelCom, which was the first stock to IPO on the Russian market in 1997, and Mechel. The latter four stocks actually traded on the NYSE, which was the preferred destination for Russian IPOs until 2004. The last NYSE IPO was Mechel in late 2004, but then the focus was shifted to London as a destination for Russian IPOs.

The first Russian IPO on the London Stock Exchange was Sistema in February 2005. That stock was added to MSCI Russia in June 2005. Then in August 2006, Novatek was added to the index following its very successful London IPO. By mid-2005, the MSCI Russia index included all stocks that had previously IPO'ed, except for the two 2002 MICEX IPOs of RBC and 36.6, which were too small to make it into the benchmark.

Gazprom's listing on MICEX in 2006, following the fall of the ring fence, which prevented foreigners from investing in Gazprom local shares, caused the weighing of Gazprom in MSCI Russia to increase from 3 percent to 30 percent. The increase in the weight of Gazprom, which was very much expected, corresponded to a fivefold increase in Gazprom's stock price from 2004 to 2006. Which made a few people rich.

Then 2006-08 saw an explosion in Russian IPOs stocks like metal producers TMK, Severstal and NLMK, which listed their shares on MICEX and in London and subsequently were added to the index. Real estate companies LSR and PIK have also been added following their 2007 IPOs.

A big chapter in the index's history is Rosneft's IPO in 2006. Rosneft had a really difficult time to be included. MSCI stubbornly refused to add the Yukos heir to the index, sighting the rule that it only needs to track 85 percent of the Russian market cap and doesn't have to include Rosneft. But investors' pressure prevailed, MSCI launched consultations with investors that insisted on including Rosneft, and the indexing agency succumbed to the investors' cry. Finally Rosneft made it into the index in two increments: March 2007 and in June of that year.

The pre-crisis glory of the index culminated with end of the UES reform. UES was removed from the index in June 2008 when it was unbundled into dozens of spinoffs. Its spinoffs, however, were allowed to enter into the index one by one. The first was Rushydro in August 2008, followed by Federal Grid in November 2008, followed by Inter RAO in April 2009 and finally MRSK holding a year later in November 2011. All these electric utilities stocks were not IPO'ed, but they subsequently placed chunky blocks of shares in secondary offerings.

The most dramatic inclusion of the stock in the MSCI Russia index was Raspadskaya. The stock was announced to be included into the index on May 10, 2010, just two days after a horrific explosion at the Raspadskaya mine.

2010 saw another change. It started with big Hong Kong IPO of RusAl, which marked a switch in investors' focus to yet another destination for funding: the Hong Kong Stock Exchange. Unfortunately as RusAl was a company domiciled offshore, MSCI rules did not allow to include offshore stocks into its composition. Other stocks that IPO'ed as offshore entities, such as Evraz X5, have never had a chance to be included into Russia index no matter how hard they tried. But RusAl, though, managed to find a way around it. It launched the RDR program on MICEX, and according to MSCI rules that gave hopes that share will be eventually included into the Russia universe.

In the beginning of 2009 a new rule was announced by the financial regulator in Russia that limited the GDR issuance in the company to just 35 percent of the total and allowed at most half the issue in a public offering to be placed in GDRs for Russian stocks. It's either this new rule or a lack of domestic investor base, the small number of which was wiped out during 2008 crisis, that companies lined up to be domiciled as offshore in order to get to a listing in London.

So the likes of Transcontainer, Global Ports, Hydraulic Machines, Etalon, RusAgro and Yandex are all domiciled as offshore companies and have no chance to be added to MSCI Russia because it is against its rules to add stocks that are not Russian to the Russian universe. The way out of this situation was paved in MICEX's transformation and the central depositary exchange, which will result in foreign companies trading on MICEX. This will allow MSCI to include these offshore stocks if they achieve significant trading volumes on MICEX.

Because of this domiciliation problem MSCI Russia now includes only several stocks, which are sort of new startups of post-Soviet period: LSR, Magnit, MTS, Novatek and Sistema. The remainder of the 21 stocks out of 27 stocks in the index all included assets inherited from the Soviet times. It would be good to see likes of Okay or RusAgro or Yandex or Mail.Ru to be included eventually. As they stay now they are off the index plays.

The current chapter in the MSCI Russia index is about processes opposite to IPOs such as delistings, M&As buybacks and perhaps even about some companies being taken private: Norilsk Nickel saw its weighting reduced on the back of multiple buybacks as free float is shrinking. We have seen Vympelcom, Polyus and Polymetal attempting to fly away from Russian risk changing domiciliation and being removed from the MSCI Russia index. Finally we have seen M&A deals such as PepsiCo buying Wim-Bill-Dan, which also caused removal of stocks from the index.

However, we hope that the next chapter in the index history will be all about new IPOs and new placements and an increase in free float. We are awaiting privatization deals, but at the same time we are hopeful for more IPOs of the companies in the non-Soviet assets sector. Russia's weight in the MSCI Emerging markets index is small — only 7 percent. South Africa, which has market cap three times smaller than Russia has bigger weighting because its free float is bigger. In fact, South Africa has 100 percent free float, and Russia only 27 percent. A large part of the Russian market is privately held either by oligarchs or by the state. There is also a big disconnect between Russia's weighting in global landmass and Russia's weighting in the emerging markets index.