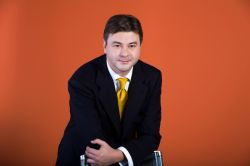 A famous saying goes, "There is nothing as permanent as change." We continue to live in a changing world of evolving technologies, emerging and shrinking economies, geopolitical developments and climate change. Under these circumstances, you can either react to change or manage it. The second option is, of course, more preferable because it allows companies to be one step ahead of competitors, to create a viable business strategy and proactively respond to external factors via, among other things, the use of information technology.

For example, Integra Group deployed its "safety cushion" corporate reporting system just before the global financial crisis. While industry peers were trying to understand what was going on by analyzing partial and contradicting data, the fact that Integra was capable of running more than 50 financial scenarios during one day helped it adequately respond to the changing market environment.

Today not every business can invest in expensive hardware and software implementations, with many companies opting for outsourcing arrangements to save money and resources. This is a growing trend, and many analysts predict that outsourcing has a great future. For example, Gartner analysts forecast that the SaaS, "software as a service," model for business applications will be used by 43 percent of chief information officers four years from now — a major increase from 3 percent in 2010. In Russia, one-fourth of CIOs surveyed by the research company HeadWork Analytics were already using data center outsourcing services, and 7 percent of CIOs plan to use it in the future.

Indeed, our experience confirms that outsourcing of computing capacity and services is highly relevant, with CROC's outsourcing data center proving incredibly popular among customers for executing a wide range of tasks. For example, LensMaster used virtual capacity provided by CROC's outsourcing data center when deploying its enterprise resource planning system, and thus reduced its costs several times compared to initial estimates. Retail chains use outsourcing intensively for out-of-stock, logistical and supply chain management systems, while banks operate "external" data centers for backup purposes. In the case of industrial and other disasters, outsourcing helps guarantee the continuous operation of critical systems: from databases to billing and automated banking systems. Startups can opt for outsourcing to avoid investment-heavy internal infrastructure implementations and then invest the saved funds into their own promotions — the path chosen by Third Rome.

As a result, most analysts have high expectations for cloud computing technology — the "heart" of tomorrow's outsourcing. Indeed, according to the International Association of Outsourcing Professionals, some 80 percent of companies plan to start cloud-based projects. This technology is no longer "exotic" in the American and European markets, with the U.S. public sector alone implementing six times more cloud-based projects in 2010 than 2009, and with the British government planning to reduce costs by 20 percent through the use of its cloud-based IT strategy. But there are signs that Russian customers are also gradually catching on to cloud computing. Although the scope of Russian cloud-based projects is not currently comparable to that in the West, there is every reason to believe that Russia follows global trends in this area. Indeed, according to IDC data, the country's cloud computing market can grow by a factor of 20 over the next two years.

Although limited in number, cloud computing projects in Russia are helping  challenge the stereotypes of Russian executives and are clearly showing them the advantages of this new technology. For example, we have implemented a cloud-based IT infrastructure for a multifunctional center for the Kostroma region's administration, now providing 72 public services on a "single point of contact" basis. This solution is a good example of how changes — in this case a regional IT transformation and adoption program — can be managed efficiently.