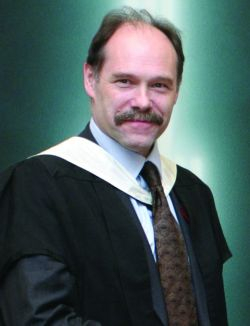 The years since the financial crisis began have been very complicated both for Russia and other countries. Like others working in business education, during this period I have often had to answer the same important question: Can we be blamed for what happened? Today my reply would be: Indeed, we have an impact on situations, but we cannot be responsible for what actually goes on. The fact is that business education programs are designed to produce responsible managers, not single-minded executives fixated on profit.

The financial crisis has shown that all human beings live in a very small and fragile world, but I believe that our common efforts can make our lives better. This confidence is based on two specific features of modern business education. Firstly, we are able to integrate into our programs the best ideas originating from different parts of the world.

Examples include total quality management, or TQM, techniques that have a U.S.-Japanese origin, elements of the South African philosophy of Ubuntu, as well as the practice of microfinance, first applied in Bangladesh. The single-entry method of accounting, traditionally used in family businesses in India, is also of a certain interest. It can be compared with the system of double entry. In Russia we see a highly developed system of traditional education and a rigorous approach to academic disciplines.

Secondly, in the process of learning and teaching we use a practice-orientated approach, based on students’ analysis of their own workplaces and the problems their organizations face. As a result, both the managers in question and their organizations benefit. Managers develop personally and their organizations gain certain advantages on account of the learning outcomes being put into practice immediately. Thus, if there are several employees of one company studying together, they have the ability to create valuable innovation and improve business processes considerably.

In such a way, knowledge gained at university is converted into real benefit. How does this happen? People interested in management communicate with each other and discuss actual issues or design ideas, which are then put into organizational practice. Thus, TQM appeared because of philosophical interest in the reduction of waste. Within the United States, where statistical tools for quality assurance already existed, this method did not become popular. But in Japan, these ideas, combined with traditional approaches to business, were put to use and eventually evolved into a set of techniques and practices. The introduction of a quality improvement method for organizational processes, in fact, has led to significant changes in enterprise performance. Thus, a three-year application of the principles of TQM allowed production costs to be reduced from 5 percent to 0.000003 percent. Huge amounts of funds are saved, and industrial goods become cheaper.

Today’s business schools are increasingly often acting as agents of the best ideas from around the world, regularly developing new, more intelligent programs. Ideas based on practical research and experiments, having proved their efficiency in practice, become part of the curriculum. For example, we aim to go beyond the narrow world of Anglo-American educational paradigms and try to maximize the use of experience from other regions of the world to make business a more stringent and effective discipline.

Have the students actually changed recently? I can say that student groups have become younger, while their interest in financial issues has increased and short-term courses have become more popular. The theme of corporate social responsibility and sustainable management has actualized. People are increasingly often choosing programs that allow them to work and learn at the same time.

Another observation can be made, though it is not connected with the financial crisis but with the general trend of economical development. Countries like India, Brazil or China lack business programs at traditional schools. Particularly, in India, this lack can be estimated at about 40 million student places. In Brazil, the state has invested in primary and secondary education, but only 10 percent of the population has access to higher education. In China, the figures are even more impressive. Therefore, we believe that one of the greatest challenges today is to make education more accessible.

We are only now becoming aware that the situation in Russia is different from what it was, say, in Britain. This is a very interesting process where science meets practice, and will result, I hope, in a global business school.