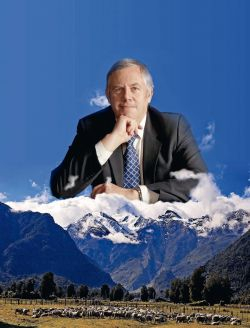 Russia is an ocean of land, and Russians are island people in their mentality. The extraordinary Russian nationalist, Alexander Solzhenitsyn, brilliantly described the tragedy of Stalinism with his description of the minute lives of ordinary individuals lost in the network of prison camps scattered around Russia, which he described as the “Gulag Archipelago.” Yet, take away the tragedy behind Solzhenitsyn’s impassioned descriptions, and you have the essence of life for Russians — islands of human habitation. This puts an emphasis on human values and personal relationships, including relationships with foreigners.

Russians began their new era in the 1990s on the back foot. The ruin of the managed, centrally directed Soviet economy and the destruction of careers, savings and stability were inevitable, if not predictable. From being a developed country, indeed an empire, with ambition and attitude in August 1991 to being a supplicant country at the “beads-blankets-muskets” stage of development in 1992 with civil war as a real threat was a mental and physical shock that few peoples other than Russians, with their extraordinary resilience, could have withstood.

The Russian story since then is a highly positive one of a New Russia, of a rebirth, of a renaissance, and at a remarkable speed. It is a human story about women and about the young. The future of Russia is in the safe hands of an impressive, motivated young generation of people who love Russia and for whom their country has no limits. It is Russia’s people who are the country’s true wealth, and women who are its real treasure. However, time — perhaps 15 to 20 years — will be needed before these young people take the reins of Russia. Between now and then, Russia needs understanding, support and encouragement from outsiders as it continues the process of returning to its rightful place of influence and authority.

Throughout their recorded history, Russians have interacted with foreigners, often welcoming them to live and work in their country, often repelling them as foreign invaders. Modern Russian history, in the period since the collapse of the Soviet Union, provides a context for foreign interaction in depth and scale unique in the most recent 300 years of Russian history. Russians are now a part of the globalized world, their economy buffeted by the free market storms that global change has unleashed.

Depressingly, the “smash-and-grab” market economy that developed in Russia in the 1990s, when billions of dollars was removed from the country, was an all-too-familiar story. A developing country underwent wracking social and economic change, with locals and foreigners coming along and helping themselves to riches accidentally left ownerless. The fact that “free market” became synonymous with the theft of national resources and the accumulation of ill-gotten gains, seemingly with the connivance of respectable countries that considered themselves the victors of the Cold War, rankles with many ordinary Russians who still await the benefits of a market economy.

But there was another business story from the 1990s — an extraordinary rebirth of entrepreneurialism and of innovation. Necessity proved to be truly the mother of invention. From within the peoples of Russia — gray, uniform, Soviet-molded — emerged outstanding individuals managing in the toughest of times. The story of Russia is not about the emergence of an oligarch class of individuals from humble backgrounds who came suddenly into mind-bogglingly immense wealth. The real story is about the rapid emergence of small and medium businesses rebuilding Russia’s economy to serve the people, rather than a military-industrial complex. This story is, par excellence, about successful and imaginative business management in tough times.

Russia is a great country, and Russians are a great people. They are a proud people, and they have very long memories. They deserve, and need, respect for what they have achieved — and what they will achieve. They have come a long way from the 1990s and feel that they have regained their respect. There is a long way still to go, and Russians would be the first to admit it. They are working to develop a national “idea” or vision of what Russia will be. They have to get on top of corruption, which is not just a cancer in the body politic but is also pozor, or shame, for Russia itself. Russians can and will do better. But they will resolve their problems in their own way and in their own time.

Over the next few years, we can expect to see a much harder and tougher Russia in its many dealings — political, economic and social — with the wider world. The stakes are now much higher: Russia is back on the world stage. Having a Russia policy and investing in the human resources needed to work with Russia and Russians will be essential for those who want and need to work with the richest country in the world.

Russia offers foreign executives the opportunity to build businesses of “neat appearance,” responding to Russian needs, utilizing the best of Russian and foreign ideas, and capable of successful defense from the wolf, in whatever guise this creature takes!