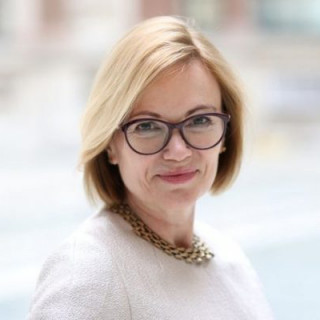 By Deborah Bronnert CMG, British Ambassador to the Russian Federation
Updated: Jan. 31, 2020
We are looking forward, looking outwards, committed to the vital issues of today and playing our part in securing a better, fairer and safer world for tomorrow.

I arrived back in Russia in the second week of January, 15 years after I last served in Moscow.

My first few weeks have reminded me of why I enjoyed living and working here so much the last time around. The warm welcome and high energy of Russian and international friends, colleagues and contacts, beautiful street lights (definitely bigger and brighter than in 2005), a wonderful range of parks, museums and concerts and — at last — some snow!

Representing the UK in Russia is never boring — and the pace of events in recent weeks has reinforced that impression: Proposed constitutional changes, a new prime minister, and moving ceremonies to mark the 75th anniversary of World War II. Of course our bilateral relationship remains difficult following the Salisbury attack. Russian actions in Ukraine and elsewhere cast long shadows. But despite these, close people-to-people, cultural, investment and trade links continue to flourish.

Today the UK undergoes a significant change. Three and a half years after the Brexit referendum, at 11pm GMT on Jan. 31, the UK will leave the European Union. Yards of newsprint have been dedicated to analyzing that decision, and the political process and negotiation which has been required to get this far. This is not the time or place to add to that analysis. But I do want to look forward.

Tomorrow, we start a new chapter in our history. The UK government is determined that we build on the strong relationships we have with the countries of Europe, and that, simultaneously, we develop partnerships further afield. We will continue to be an outward-looking, world-leading country.

No Brexit For Russia

We will demonstrate that through revised trading relationships with the European Union and with other countries, through ongoing UK engagement on difficult questions of global security including on Iran, Libya and Syria, and through our long-term efforts to help the world’s poorest through humanitarian aid.

The UK is the only major economy to meet the UN target of spending 0.7% of Gross National Income on development assistance every year.

We will continue to engage and lead on major thematic issues too: Over the last two years we’ve used our convening power to host major international meetings to secure global commitments on disability inclusion (July 2018), action to preserve wildlife and species by mobilizing against the illegal wildlife trade (September 2018) and a Global Conference for Media Freedom (July 2019). We also hosted the Commonwealth Heads of State and Government meeting in 2018 and the NATO Summit in 2019.

This year we will continue to be world leaders. The UK, with Italy, will host the next major climate change conference (COP 26) in Glasgow. Five years ago the world came together in Paris and agreed that action must be taken to limit global warming to less than 1.5 degrees. Recognizing our national responsibilities, the UK has made a legally binding commitment to achieve a carbon neutral economy by 2050.

We are transforming our economy rapidly. In 2019 the UK power generation sector managed without coal for a fortnight, for the first time since 1882. By 2025, and possibly sooner, coal will be completely absent from the UK energy generating mix.

UK and Russia after Trump and Brexit: What’s Next?

But we can’t respond to climate change on our own. Global commitments to date are not sufficient to achieve the goals agreed in Paris. So, in Glasgow we will need to agree on practical steps to avoid triggering uncontrollable changes in climate.

For our part, after 47 years of EU membership, the United Kingdom is ready to chart a new path. We are looking forward, looking outwards, committed to the vital issues of today and playing our part in securing a better, fairer and safer world for tomorrow.

Thanks for signing up!
Read more about: Britain

Sometimes it almost looks as if Putin’s information warriors and political operators need not do anything, the West gladly does their work for them.
MT PARTNERSHIP

U.K. Firms to Talk Trade and Investment in Moscow

The annual U.K.-Russia investment forum will focus on opportunities for innovation and technology.
No-Deal Planning

The plan will allow Sberbank to offer services across the EU in the event of a 'no-deal' Brexit.