Contribute Today
By Daria Litvinova
May 27, 2016

It was a story that sent shivers down every Russian parent's spine. Over the course of six months, 130 teenagers across the country were reported to have killed themselves under the influence of suicide masterminds operating within the social network VKontakte.

Novaya Gazeta, the liberal weekly newspaper that published the story, claimed mysterious "leaders" had created a whole network of closed public communities. The predators challenged school kids with creepy puzzles and assigned "death dates" to those successful in solving them. When the dates came around, children, cleverly manipulated into playing the game, committed suicide.

"Children are being worked on in social networks, pushed closer and closer to the edge, and this work is systematic and carefully planned," the article claimed.

The story — titled "Groups of Death" — immediately received more than 1.5 million hits, and sparked a media storm. Some commentators accused Novaya Gazeta of exaggerating the problem, and expressed fear that the story would only inspire authorities to impose more restrictions on the Internet, the standard reaction nowadays.

Novaya Gazeta's terrifying claims are yet to be verified and confirmed: Russian law enforcement launched a large-scale investigation of VKontakte communities and their connection to teenage suicide. Follow-up investigations by other media outlets concluded that much of Novaya Gazeta's story was embellished. The Lenta.ru news website reported that ill-famed VKontakte communities were not aiming to force children to commit suicide. Rather, they were run by nerdy teenagers obsessed with accumulating likes and shares, Lenta.ru said, and publishing "shocking content" about suicide helped them drive traffic to their online groups. Such efforts did result in suicides, the investigation reported, but not hundreds of them.

Nevertheless, youth suicide rates in Russia have for many decades been among the highest in Europe, and the Internet alone cannot be blamed.

For some, it may be the best mode of providing help.

Government targets are already in place to reduce the suicide rate in Russia to under 16 people per 100,000 people by 2020. By this criteria, the government can claim some success — the average rate nationwide is around 16-17 suicides per 100,000 people. But these figures are not uniform across the country, and this is a problem, says Yevgeny Lyubov, head of the suicide department of the Moscow Psychiatric Science Institute. "The situation here is more than worrisome: in some parts of the country we are talking about 100 or 200 suicides per 100,000 people," he says.

As Russia's suicide rate places it in the top-three in Europe, it is not surprising that its youth suicide rate is also one of the highest, says Matthjis Muijen, mental health program manager at the World Health Organization's Europe office. "There's clearly something going on in Russian-speaking countries that creates anxiety and unhappiness. You don't just commit suicide, it's a pretty big decision to make," Muijen told The Moscow Times.

Suicide among teenagers is essentially an anomalous reaction to often ordinary events. In 90 percent of cases, depression or certain character features, like extensive impulsiveness, is an underlying condition that drives a teenager to commit suicide. Common assumptions that a child killed himself because of bad grades in school or an unhappy love story are wrong. "Bad grades and unhappy love stories happen to all of us," says Lyubov. "If these experiences trigger suicide, it means that the teenager has been suffering from depression or had specific character traits that led him to react to a traumatic event in this manner."

Russian children are becoming lonelier these days, says Yelena Shumakova, a supervisor at Your Territory Online, a foundation that provides anonymous online consultations to teenagers in trouble.

"Kids used to spend more time at school, participating in different after-school activities," she says. "There used to be a lot of free workshops and studios and classes, and children had more friends and more mentors they could talk to. Now they spend most of their time alone with their computers."

Those of them who reach out to suicidal communities online feel rejected by their family or friends, if there were friends to begin with, says Lyubov: "A family can look happy and wealthy from the outside, but if a child joins a suicide community, it means there's been a serious lack of understanding in the family. He is basically looking for that understanding in these communities. He's looking to socialize, to be part of a group again and follow someone's example."

Age-standardized suicide rates, as of 2012 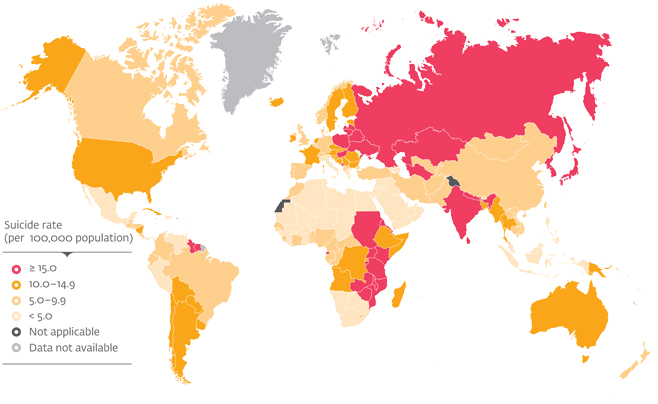 Banning such communities and websites is unlikely to solve the problem, if only because new ones will fill the void. At the very least, government should create different online consultation platforms to help young people in trouble.

Lyubov suggests the Internet is, in fact, an ideal medium, through which to reach teenagers. "First aid in one click — that is what teenagers would understand. Hotlines are not for them: Only 5 percent of suicidal adolescents telephone hotlines for help. Something that connects teens to professional psychologists, and to their peers as well is what is needed. It is very helpful for children to see how their peers survived traumatic experiences, how they dealt with difficult situations."

Shumakova of Your Territory Online agrees. "Children are already there anyway, so why not bring help directly to them?" she says.

Your Territory Online started out as a VKontakte group, and two years ago turned into an online platform with a dozen consultants on call every day — from afternoon till late at night. In 2015 they helped 392 teenagers with suicidal thoughts. "The suicidal state is like a tunnel — a child in that state can't see things clearly, and first of all we need to carefully walk him out of the tunnel. Only then will he be able to talk about the problems that led to suicidal thoughts," says Shumakova.

Online consultations are common practice in Western countries, but are yet to gain popularity in Russia, she adds. "However, we can see that authorities are starting to consider it useful. For example, officially, the children's ombudsman's office in the Leningrad region only has a hotline, but they receive a lot of online messages from children in trouble, and try to help by corresponding with them," says Yekaterina Fyodorova, director of the foundation.

In addition to rare projects like Your Territory Online, there is a number of unofficial VKontakte communities that also work with teenagers. One of the most renowned is Deti-404 (Children-404), founded by LGBT activist Yelena Klimova. Deti-404 helps LGBT teenagers who find it hard to cope with all kinds of problems related to their sexual orientation.

"There are no official statistics on how many LGBT teenagers commit suicide, but Deti 404 receives at least four to five letters each week from kids with suicidal thoughts," Klimova told The Moscow Times. Volunteers at Deti 404 say they know of at least 24 teenage suicides related to LGBT intolerance. "Authorities don't care at all about LGBT teens, but at least they have a few places on the Internet they can reach out to for help," Klimova says.

Repeated requests for comments on what measures authorities take to prevent youth suicide — sent to both ombudsman Astakhov and State Duma deputy Olga Yepifanova, head of the committee for affairs of families and children — went unanswered by the time the article went to press.

Experts, in the meantime, agree that the state does not do much.

In big cities like Moscow and St. Petersburg, things are not that bad, says Fyodorova, but outside of the cities almost nothing is being done. "In cities at least NGOs are there to help, but [it's a different picture] when it comes to rural areas," she says.

A great deal can be done to prevent suicide among young people. For example, identifying depression on early stages could change the situation drastically. "School children undergo medical examinations every year — why not throw in screening questions to establish depression? Especially for children aged 14-16 — they are at a higher risk," says Lyubov from the Moscow Psychiatric Science Institute. After that, school psychologists, or even psychiatrists, could work with the troubled teenagers.

Yet, rather than acting and tackling the problem systematically, authorities are happier "creating hype" when something tragic happens, says Lyubov. "But after a while it dies down and they forget about it until the next tragic incident."

The hype around the Novaya Gazeta investigation appears to be dying down already. Several online communities mentioned in the report have been shut down by law enforcement; others continue to exist and attract users.

Will the government do something constructive to help vulnerable teenagers? So far only the VKontakte governing body has acted: They posted adverts and links for the Your Territory Online project in suicidal groups, and called on users to reach out for help.