In early May, the moves came thick and fast. In Portugal, police swooped on a Russian criminal network that bought control of struggling lower-league football clubs and used them to launder millions of euros.

Meanwhile, in London, hedge fund boss turned campaigner Bill Browder presented evidence to British members of parliament that $30 million stolen in one of Russia’s most high profile frauds had passed through the country’s banks. The money was from a tax scam uncovered by Russian accountant Sergei Magnitsky, who was imprisoned and died in jail in 2009. It was spent, Browder said, on private jets, elite school fees, lavish houses and designer dresses in Britain.

As Browder laid out his story, it was revealed that a Spanish judge had issued arrest orders for 12 Russians, including several current and former government officials. The warrant was part of Europe’s biggest probe into Russian organized crime. Investigators say Gennady Petrov, a gangster from St. Petersburg, plowed money into Spanish real estate that came from contract killings, arms and drug trafficking, extortion and kidnapping. They claim Petrov was the center of a money-laundering cabal that reached the top levels of Russian officialdom.

The events revealed the extent to which Russian organized crime has penetrated Europe. They also suggest that European authorities might be mobilizing against it.

Gennady Petrov fled Russia two decades ago. A heavyset bruiser who had climbed to the top of the criminal ladder in St. Petersburg while Vladimir Putin was a deputy mayor, he moved to Spain after losing ground to a rival gang.

He was not alone. Spain in the 1990s and early 2000s was “a kind of playground for organized crime figures … nice climate, and weak law enforcement,” says Mark Galeotti, an expert in Russian organized crime and security services.

Crime figures also spread to Israel, Cyprus and Germany. In the French Riviera, Russian criminals laundered suitcases full of cash through the property sector while bribing local politicians and judges to look the other way. By the 2000s, Europe’s police agency, Europol, was calling the Baltic States the “northeast criminal hub.”

London attracted a different crowd. These were the businessmen and political figures whose wealth could withstand at least a cursory probing of its sources. Euan Grant, an expert on transnational crime, calls these people “politically-protected looters.”

Organized crime had blossomed in Russia in the 1990s as state authority broke down. Under Putin, who became president at the end of the decade, the melding of the state and criminal networks was institutionalized, says Galeotti. No state employee lives off their salary alone. Instead, a culture of cronyism developed where personal connections were used to dole out favors and no one is truly clean.

Even Defense Minster Sergei Shoigu, a career official regarded as one of the less corrupt members of the government, was found by anti-corruption activists last year to have a lavish, pagoda-style mansion near Moscow allegedly worth $18 million. 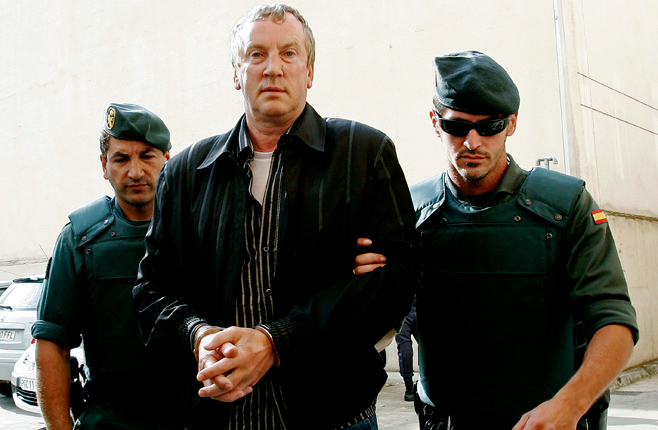 When Russian businessmen and gangsters moved overseas, they took their personal connections with them. The Spanish investigation into Gennady Petrov appears to provide a snapshot into the system’s workings.

In the 1990s, St. Petersburg was practically run by criminals, and Petrov was a big figure. “Everyone knew him,” says Roman Shleinov, a Russian investigative journalist. He had cash to invest and could pull strings in different spheres of government and business. Petrov’s connections extended to Putin’s closest associates. In the late 1990s, Petrov was a shareholder in Bank Rossiya, later described by U.S. officials as the “personal bank for senior [Russian] officials.”

But Spanish prosecutors were on to him. They launched an investigation called “Operation Troika” in the late 2000s. Prosecutors tapped hundreds of telephone conversations and examined bank transfers and property transactions. Their report, issued last year, revealed connections between Petrov’s crime group and a wide circle of Russian officials and politicians. Among the senior figures mentioned were former Defense Minister Anatoly Serdyukov, former Prime Minister Viktor Zubkov and current Deputy Prime Minister Dmitry Kozak. Even Putin got a mention in one of the tapped conversations discussing his reported ownership of a house in Spain.

The 12 names on the Spanish arrest warrant revealed this month are only slightly less senior. They include Vladislav Reznik, a senior member of parliament, Igor Sobolevsky, a former deputy head of the Investigative Committee, Russia’s equivalent to the FBI, and General Nikolai Aulov, deputy head of the narcotics police. Among the accusations, prosecutors say Reznik helped Petrov get clients appointed to key posts in Russia in exchange for assets in Spain. Aulov, they said, was used to intimidate potential threats to Petrov’s group.

The accused have dismissed the claims. Aulov branded them “political.” Kremlin spokesman Dmitry Peskov said the allegations against Putin were “beyond the realm of reason.”

But the investigation’s chief prosecutor, Jose Grinda, was convinced he had uncovered the true nature of Russian crime syndicates. According to a U.S. diplomatic cable leaked to WikiLeaks, Grinda told U.S. officials in 2010 that Russian criminal groups operated “hand-in-hand” with the state, whose tactic was to use “organized crime groups to do whatever the government of Russia cannot acceptably do.” These tasks included running guns to clients such as Kurdish militia, he said. In return, the Russian state gives criminal groups support and protection.

Russian cash has certainly padded many pockets. Flows of illicit money are difficult to measure. They are also various in nature, ranging from direct proceeds of drug and people trafficking to kickbacks and sweetheart deals. But analysts say tens or even hundreds of billions of dollars have left Russia over the last two decades in criminal schemes. Deutsche Bank last year said $1.5 billion enters Britain each month without being recorded by official statistics. Half of that cash comes from Russia.

Russian money has been a boon for real estate agents, lawyers and purveyors of luxury services. But it has also cultivated an extensive network of former government officials and intelligence figures now working at private advisory firms. One such was Conservative Friends of Russia, a lobby group founded in London in 2012 and chaired by Sir Malcolm Rifkind, a former foreign minister. Rifkind was later filmed by Britain’s Channel 4 television boasting he could provide access to “every British ambassador in the world” and offering to use his political connections on behalf of a fake Chinese company for £5,000 a day.

“No one wants to kill the golden goose,” says Browder.

That is a key reason for lackluster policing. Another is that much of the money looks superficially clean. It has been smuggled through multiple countries and often comes with the stamp of a clever corporate lawyer. Western law enforcement isn’t set up to deal with this, says Grant. “It’s looking for the smoking gun” — something Russian fraudsters are too clever to provide. 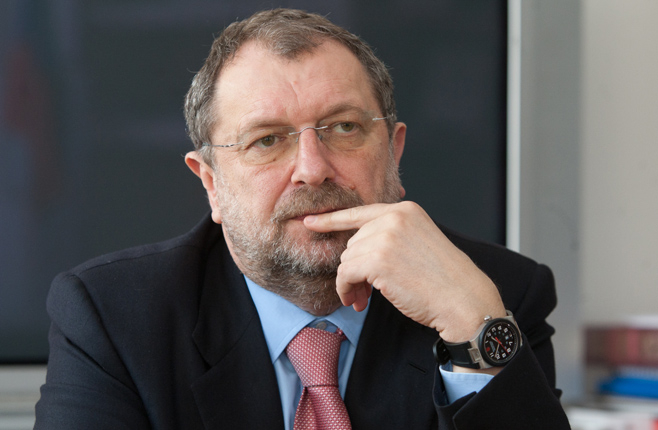 Spanish prosecutors say Vladislav Reznik, a senior member of the Russian Duma, helped Gennady Petrov appoint allies to senior positions in the Russian bureaucracy in return for assets in Spain.

Attitudes may now be changing. Following Moscow’s annexation of Crimea in 2014 and support for Ukrainian separatists, many Western capitals now see Russia as a security threat. More people are worried at the effect of Russian money on Western politics.

Grant warns that the penetration of organized crime in the Baltic countries could be catastrophic in a potential national security crisis provoked by Russia. He says Russians connected to state-sanctioned organized crime form a massive quasi-intelligence agency for Russia. They are “political trojan horses,” he says. By spreading their money, they can “undermine morale, compromise officials and weaken Western resolve.”

Scandals around the Spanish investigation into Petrov and the poisoning of Alexander Litvinenko in London in 2006 have also shifted public opinion. An enquiry in Litvinenko’s death published this year said the former Russian secret policeman had given evidence to Spanish prosecutors investigating Russian organized crime. Shortly afterward, he was fed radioactive polonium in an apparently state-sanctioned murder. Outrage over the Panama Papers leaks this year is also forcing governments to consider tighter measures against offshore companies and financial crime.

Few think that a full fledged attack on Russian money is feasible. More likely is “a partial and creeping lockdown,” says Browder. As in Spain and Portugal, individual prosecutors in different countries will investigate and seize Russian property, he says. “The more they do, the more empowered some of the timid ones will get, and this will become a much more wide ranging problem for the Putin regime.”

The process will be difficult and slow, says Grant. Russian organized crime networks have had time to deeply embed. Meanwhile, Moscow does not extradite its citizens. And its law enforcement agencies often refuse to aid foreign investigations. Petrov, now 68 and living in St. Petersburg, is unlikely to ever again appear before a Spanish court.

That doesn’t mean there are no consequences. Spain has seized property worth tens of millions of euros. Those on Spain’s arrest warrant cannot travel to Spain or any country with which Spain has an extradition treaty.

“What this does is bit by bit begins to lock down the outside world to this criminal elite,” says Galeotti. This sort of action goes to the heart of the Putin regime. “This elite regarded globalization as a buffet — that they can enjoy all the opportunities of being Europeans while at the same time maintaining their capacity to steal with impunity back within Russia,” he says. “Now they are finding that this is becoming harder and harder.”

When Spanish police raided his properties in 2008, Petrov was living in a 20-million-euro villa in Calvia, a village on the Mediterranean island of Majorca. He had a painting by Salvador Dalí on the wall. Among his neighbors was the sister of King Juan Carlos.

A crackdown on criminal groups also raises questions. The omnipresence of crime in Russia means it is often difficult to differentiate between legitimate and illegitimate business. Meanwhile, the entanglement of crime and state also means that every clampdown on a “businessman” or their cash is an attack on the foundations of Russia’s political system, which risks provoking Moscow.

However, the drip feed of actions against Russian organized crime continues. In early May, the European Central Bank said it would phase out 500-euro bills, a favorite of gangsters. A week after the Portuguese raids and Spanish arrest warrants, police in London said they had seized $22 million and arrested two men suspected of laundering money for a Russian gang.

To be truly effective, however, action has to be coordinated, with tighter regulation and information shared across jurisdictions. If not, it will amount to “squeezing the balloon,” says Galeotti — where pressure in Spain and Portugal merely moves the money to France and Greece. Despite encouraging signs, such continent wide measures seem a long way off.

A batch of illegally imported luxury goods estimated to be worth 12.5 million rubles ($192,600) has been seized by the Russian Federal Customs Service...
news

A fourth suspect in the murder of the policeman and his family in Russia's southern town of Syzran has been detained, the Interfax news agency reported...
what's in a name

The move follows the establishment of “Donetsk People's Square” near the U.S. Embassy.