For many years, Triumfalnaya Ploshchad was a nondescript square across from Moscow's beating heart. It was an occasional meeting point for anti-regime protesters, a space to get across to reach somewhere else. Today, however, it is an example of modern design, a beautifully lit Scandinavian oasis lined with swings and pavilions.

The square's overhaul is the pet project of Moscow's chief architect Sergei Kuznetsov. His office now sits on the square itself, with panoramic views filling the window behind him. He says he is happy with the result. "There is this misconception that a city's design, how comfortable it is for people to live there, is all a matter of chance. In reality, everything is carefully thought out in advance," he says.

Kuznetsov, 38, has already had a dazzling career in Russia. At 23, he was already co-owner and CEO of the S.P. Proekt architectural agency. In 2006, the company became part of the SPEECH Choban and Kuznetsov architectural bureau, one of the most successful in Russia. Now Kuznetsov looks very much at home in the role of government official.

Kuznetsov's goals have changed little in his six years as Moscow's chief architect. He is still primarily focused on developing pedestrian areas, public spaces and traffic flows. It's a vision he shares with Moscow Mayor Sergei Sobyanin, a man Kuznetsov is careful to credit repeatedly during the interview. "It is entirely his project," Kuznetsov says. "Everyone understands quite clearly that there is just one ideological leader, and that he is the one who sets the direction for the city's development." 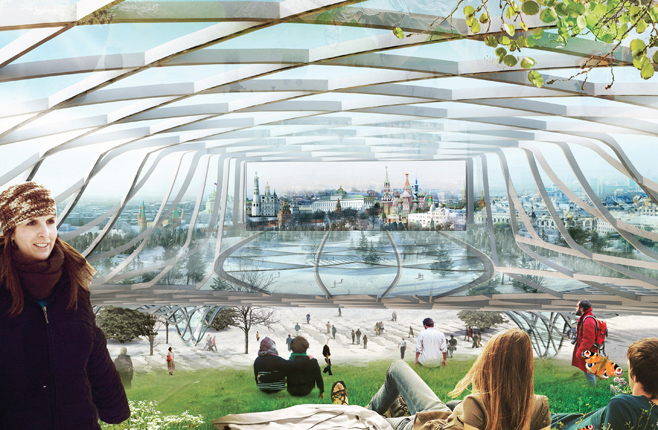 “In the Soviet era, the waterfront was considered a peripheral area, a sort of backdrop for the city,” Kuznetsov says. He is now working to make the Moscow river the city’s main thoroughfare.

Still, the Moscow government has also been criticized for an occasionally haphazard approach to planning. From controversial new landmarks to general outrage at the city's kitsch choice in Easter decorations, controversy and urban development seemingly go hand in hand. The Easter decorations elicited such a strong backlash that the authorities relocated the largest installation away from the city center.

While such decorations are part of the urban environment for which Kuznetsov is responsible, he is keen to stress that improvements to city streets do not fall under his department's jurisdiction. He answers for individual — albeit important — points such as Triumfalnaya Ploshchad or Ulitsa Novy Arbat, as well as planning in a more general concept.

Moscow's Novy Arbat is an ode to socialist architecture and Soviet planning. In the mid-1960s, municipal authorities plowed a highway through old Moscow and built skyscrapers along its path. Today, city planners are trying to cope with the results.

Kuznetsov argues that the best way to transform Novy Arbat is through the use of trees, pedestrian zones, building restoration and proper lighting. The city government originally wanted to turn Novy Arbat into a Russian Times Square and flood it with bright lights. "But there are residential buildings there and bright lights would have made it impossible for people to sleep," says Kuznetsov. "So we took the opposite approach: We added trees and fill-lighting, which creates a greater sense of intimacy in the evening and reduces the sense of mega-space."

Soviet mega-spaces are one of Moscow's main urban design problems. "The human eye can distinguish individual faces up to 60 meters away," Kuznetsov explains. "People are able to distinguish leaves on a tree, a branch, a bench, elements of a certain scale. But open spaces of any great size create associations of danger. Spaces should be compact. That is why we decided to restore lindens on Tverskaya and plant trees along the Garden Ring," he says.

The area around Patriarch's Ponds is one of Moscow's most comfortable urban environments; many residents saying it doesn't feel like being in Moscow at all. Kuznetsov explains what makes it work. "It is very accessible, something to which we aspire: The first floors of buildings are devoted to businesses. Cafés and shops can only appear where space is physically available, so if an architectural plan makes no provision for them then that area will never attract visitors," he says.

One of Kuznetsov's big ideas is to allow increasing numbers of Moscow neighborhoods to exist autonomously. Like in Berlin, for example, where residents of Mitte, Kreuzberg or Prenzlauer Berg think of themselves as denizens of those specific districts. No longer will Muscovites need to cross half the city in order to reach the nearest good restaurant, bar or park. 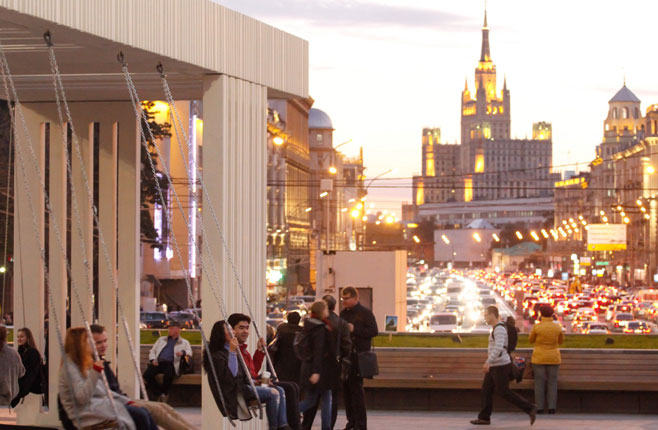 Soviet mega-spaces are one of Moscow’s main urban design problems. Kuznetsov believes spaces should be compact.

River embankments are one of the most lackluster areas of the city. "In the Soviet era, the waterfront was considered a peripheral area, a sort of backdrop for the city," he says. "They put garages and garbage dumps there. As for the river, there was nothing to be done with it. It was simply a transportation hub. Now, we believe that the river should be the city's main thoroughfare."

The chief architect believes that the construction of a new park across from the Kremlin will help revive the river embankment. The Zaryadye Park is to be built on the site of what was once the Soviet Union's largest hotel. When it is completed in 2017, it will include an approach to the water and a café.

Kuznetsov is also busy revitalizing the embankment in the area of the former ZIL factory in the south of the city. The factory itself is now gone — a huge vacant lot in its place. Kuznetsov promises the site will become home to bike paths and pedestrian zones. He hopes that changes will make the embankments unrecognizable within a decade. "For a project of this size, 10 years is nothing," he says. "Even in terms of a single human life, a decade is not a long time. That gives cause for optimism."

Optimism is in short supply among Muscovites these days. The city's liberal residents who mostly welcomed urban reform three years ago now increasingly greet changes with hostility. Many progressive Muscovites now view the creation of Western-style bike paths as a change for the worse, as a symbolic return to Soviet policies. The general response to any new construction is resentment.

The recent controversial decision to erect a 16-meter monument to Prince Vladimir in one of Moscow's most prominent locations — Borovitskaya Ploshchad, a location protected by UNESCO's World Heritage Committee — is just one such case. It is an important political undertaking, and one over which he has no influence. Kuznetsov says that his only role was to choose the landscaped design around the monument.

"Twenty young Moscow architects took part in the [landscape] contest," Kuznetsov says. "The winning project by AI Architects is a visual allusion to the historic baptism of Rus. It will appear as if water is flowing around the monument, while the stone steps will symbolize diverging ripples of water. I think that, with the right lighting for the monument and stairs, it look beautiful at night." 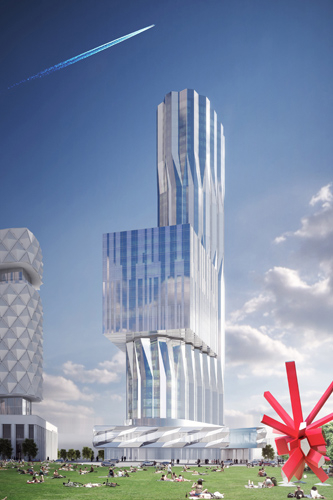 U.S. architectural firm Asymptote has designed a skyscraper to go in the old ZIL factory complex.

Greater outrage is expressed over the dismantling of famous public landmarks. As many as 35,000 people signed a petition against the demolition of a telephone exchange building on Pokrovsky Bulvar, originally built in 1929. A legacy of the famous Moscow constructivism movement, the building never gained official designation as an architectural landmark. When the building's owner decided to raze it and build a residential building it its place, the public was outraged. Several dozen architects, including Sergei Choban, Kuznetsov's former architectural partner, demanded that the mayor halt the demolition. None of that helped. Kuznetsov, again, argues that this particular incident is outside his jurisdiction and comes under the authority of the Urban Heritage Department.

Aside from complaints about individual reconstruction decisions, the main gripe from Muscovites has to do with the capital's constant construction. Kuznetsov counters that "any metropolis is a major construction site and the transition from the rigid Soviet model to a more flexible modern capital is inevitably painful."

Major new hubs are set to appear in the city, Kuznetsov says. Luzhniki Stadium will become the center of a zone devoted to sports; river embankments will become a paradise for runners, cafés and parks; while VDNKh will transform into an intellectual and educational center.

"Temporary inconveniences," as Kuznetsov calls the construction, are the price residents will have to pay for large-scale change. "Of course, if you live in the city center and workers are digging right outside your window all summer, that isn't much fun, but there's no getting around the fact a lot of the work has to be down there."

At the heart of it all is preparation for the 2018 FIFA World Cup, the engine pushing Moscow to change so rapidly. "I think the whole feel of city life will calm down after 2018," Kuznetsov says. "Everything will go back to the usual routine. This is only temporary work, but the results will be long-lasting. We need to have patience. That is the only advice I can offer."