After one of the coldest and snowiest April weekends to date, let's hope that this week spring will finally start for real. Here's to spending the weekend sipping a beer al fresco and then hitting one of the many great gigs the city has to offer.

Basta, one of the most popular Russian hip-hop artists of the past decade, will perform on Thursday at an unusual place — the Kremlin Palace, with an unusual accompaniment — a philharmonic orchestra. As Basta's audience becomes older and increasingly gentrified, it seems like a logical step.

Naadia will present her new EP album, "Khorosho" (Good), at TsDKh on Thursday. Founded by Nadya Gritskevich, leader of the electro and trip-hop band Moremoney, Naadia has become one of the leading Russian-language indie bands. "Khorosho" consists of three new tracks, which have all the hallmarks of Naadia's familiar indie-pop style with very personal, emotional lyrics and complicated electronic arrangements. 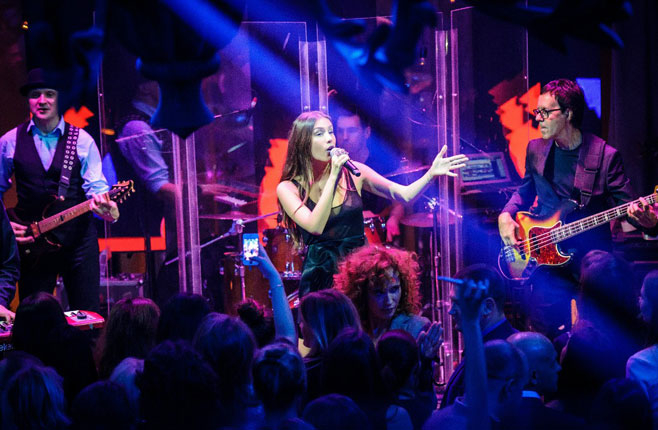 After the successful release of her debut electronic album Binasu last month, NV plays another concert with a live band on Friday, this time at 16 Tons. NV is a side-project of Kate Shilonosova, front woman of a popular post-punk band Glintshake. Binasu actually means Venus in Japanese, and sometimes it seems that Shilonosova sings in Japanese, and sometimes in English, but it is actually a made-up language. The album was released on a U.S. record label and received great critical reviews.

On Saturday British duo The KVB will visit Moscow for the second time in less than a year — they played at last year's Outline festival. This time they will present their new album "Of Desire" which mixes post-punk, electro-pop and shoegaze.

On Sunday indie-rockers from Yekaterinburg Sansara will present their brand new album at Yotaspace. Sansara has been around for more than fifteen years but recently has picked up in popularity. The band's leader Alexander Gagarin's voice sounds a bit like late Viktor Tsoi of Kino fame. There will be guest performers, including OQJAV, Red Samara Automobile Club (side project by one of the band members) and AloeVera.

Apparently it's the season for pop concerts featuring a philharmonic orchestra. A'Studio, bona fide veterans of Russian pop-scene, will present their new program Symphony'A on Sunday. Almas Serkebayev, an older brother of A'Studio's leader Baygali Serkebayev, worked on the new, classical arrangements for A'Studio hits in this truly family production.

Another season of the Golden Mask Festival wraps up this month. The sprawling celebration of Russia's best theater dominates Russian cultural life in March...
news

Russian photographer Sergey Ponomarev has won the 2016 Pulitzer Prize for news photography for a series of pictures capturing the struggle of refugees...
news

A Night at the Ball: Wine, Dine and Dance for a Great Cause

Fancy the excuse to get dressed up, wine, dine and then dance the night away all in the name of a good cause? Look no further. This Saturday Moscow's...
weekend kitchen