Dmitry Chugunov has all the characteristics of a Kremlin golden boy. Sitting in a shiny office at Russia’s Public Chamber building in central Moscow, the 30-year-old is an example of ruddy physical health. He is well-spoken and maintains a carefully constructed aura of iron self-control, not unlike that of his idol President Vladimir Putin.

Chugunov is the founder of one of YouTube’s most popular Russian-language channels and the group StopKham (Russian for “Stop Rudeness”) — an offshoot of the now defunct pro-Kremlin youth movement Nashi.

Most Russians will know the group for its high-adrenaline videos of drivers exploding in rage at StopKham activists’ pushy requests to remove their cars from the sidewalk and park in an allotted space. Celebrity fury, fist fights, baseball bats and even the odd gun — it makes for good entertainment.

But the movement’s tactics are also controversial, with frequent accusations that StopKham uses a strategy of harassment and public shaming to plague Russians, including public officials, into good conduct.

Now, StopKham’s critics have gained an unexpected ally. In late March, the Russian Justice Ministry scrapped StopKham from the government register of companies after it was accused of the “repeated and gross violations of rights,” stripping it of future government funding.

It is a sign that the Kremlin is turning its back on the patriotic squad it once helped to create. “StopKham has become an irritant to the Kremlin’s people,” says political analyst Dmitry Oreshkin. “The authorities are sick of them.”

There is a reason why he is obsessed with law and order, Chugunov says, and it lies in his experience of the post-Soviet 90s.

Like Putin, who famously grew up amid the rubble of post-war Leningrad, Chugunov’s childhood was ruled by the law of the street. His youth in Biryulyovo — Moscow’s equivalent of the Bronx — was filled with discarded syringes on pavements and the threat of violence in the air.

“Many of my classmates never made it to my age,” he says. He has few memories of his father, an alcoholic who died while Chugunov was in his late teens.

The legacy of that era inherited by Putin, Chugunov says, is one of widespread disrespect towards the law.

“Instead of it being: 'This is the law, we have to abide by it,' the common consciousness became: 'Let's con the system,'" he says. "But if the law doesn't work, the government can't do its work. That's a system that's impossible to regulate."

In reaction, he gravitated toward discipline and structure. In the footsteps of the Russian president, he became a fervent practitioner of martial arts. “Judo saved me from the streets,” he says.

And at a time when most Russian teenagers were coming up with inventive ways to dodge conscription by faking medical conditions, Chugunov embraced the Russian army and stayed on for an extra year as a member of the spetsnaz — an elite special forces unit. 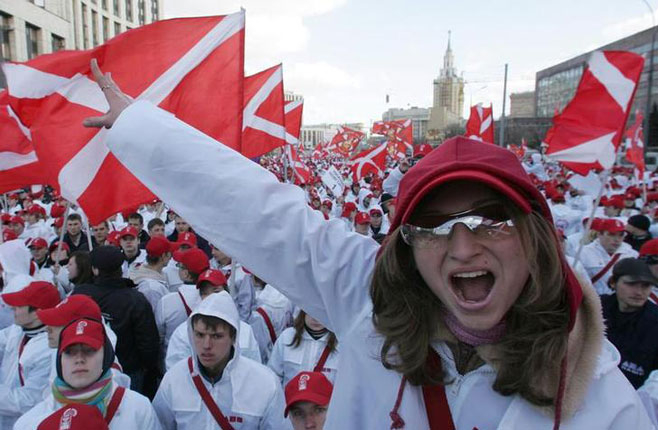 His military career did not, however, last long. The big draw had been a promise of brotherhood and justice. But Chugunov left the army feeling the military stopped short of such ideals.

“We had to follow rules that were pointless or unjust, but there’s nothing you can do about it because the army is an institution,” he says. “It chews you up and grinds you down.”

The one lesson from his days in the military that has stayed with him is to “Never surrender,” he says.

What the military failed to provide — brotherhood — youth movement Nashi (Ours) had in bucket-loads.

Established in 2005 by the Kremlin’s crafty political strategist Vladislav Surkov, Nashi was a response to the kind of youth activism that fueled Ukraine’s Orange Revolution. Surkov decided that the Kremlin needed a loyal presence on the streets to act as a buffer in case unrest spilled into Russia. To that purpose, Surkov and Nashi leader Vasily Yakеmenko recruited thousands of teenagers, often from Russia’s poorer regions.

Fears of a revolution in Russia never materialized, leaving Nashi to focus instead on mass gatherings at the famous Lake Seliger camp, large pro-Putin demonstrations and other patriotic stunts. Their activism had a darker side, extending to outright harassment of opposition activists — defined as anyone who was critical of Putin’s regime — and foreign ambassadors.

It gained the Nashi youngsters the unflattering nickname of the Putinjugend (Putinyouth).

Chugunov, who joined the movement in its early days and quickly rose up the ranks to the prestigious position of commissar, has a less sinister view. He describes Nashi as a meeting place for teenagers who “wanted to take part in the possibility of changing our country.” And in the process, he jokes, “meet beautiful girls.”

Nashi would continue to enjoy a privileged political position in Kremlin politics until its curator Surkov was replaced as deputy chief of staff by Vyacheslav Volodin in 2012. Volodin, a man with a reputation for a more heavy-handed approach, showed little regard for Surkov’s sophisticated pet projects.

Nashi’s front man Yakemenko resigned and over time his movement died an inconspicuous death. But Nashi’s activism and aggressive tactics lived on in offshoot projects, which, its organizers stressed, were "social" and not political. These included groups such as Khryushi Protiv (Pigs Don’t Agree), a movement against expired produce in grocery stores, and Chugunov’s StopKham.

The official founding myth of StopKham is suspiciously mundane. Chugunov says the idea began after his car was blocked in by a Porsche Cayenne. When, two and a half hours later, the owner of the vehicle eventually appeared — “a beautiful girl” — she got into her car and drove off as if nothing had happened.

Something clicked, he says. “I suddenly realized: B*tch, this is unfair! Lawlessness and privilege is everywhere, and people think that they can park wherever they want just because they have the bigger car.”

The unofficial version of the story, however, is that the group was set up by the Kremlin in response to growing protest sentiment which was fueling opposition movements over 2009 and 2010. One such movement was the Blue Buckets Society, which protested the abuse of flashing blue lights, so-called migalki, that had become a symbol of a privilege culture among Kremlin officials. 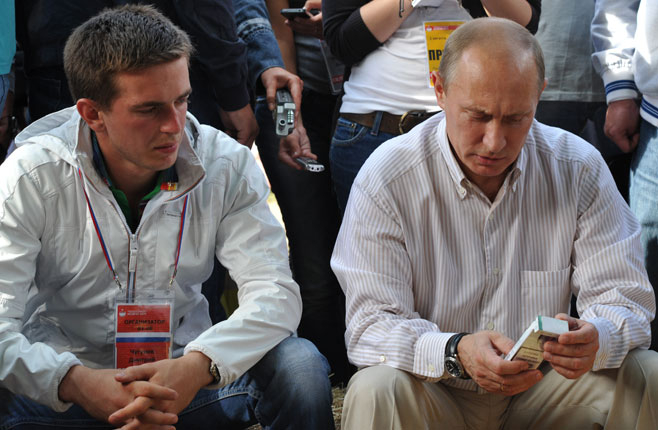 As a pro-government movement, most assumed StopKham would leave the privileges of the elite intact. And the Kremlin paid handsomely for the service. After StopKham was registered as an organization in 2013, making it eligible for presidential grants, the money poured in. From 2013 to 2015, StopKham received roughly 18 million rubles in federal funding through grants.

But as the reins loosened following Surkov’s departure from his post, StopKham has increasingly stopped upholding its end of the bargain. It set about plastering its famous sticker — “I don’t give a damn about anyone. I park where I want” — on the windshields of vehicles belonging to Duma deputies and law enforcement. It also loudly proclaimed in the media that it made “no exceptions” — not even for members of the presidential administration.

“The authorities never expected that StopKham would turn against them,” says Pyotr Shkumatov, leader of the Blue Buckets movement. “But it’s not surprising that they did. Because the most insolent people in Russia are officials themselves.”

Genie Out of the Bottle

Chugunov says it was always going to be a matter of time before the Kremlin pulled the plug. StopKham’s success, he says, was serving as a constant reminder of law enforcement’s failings.

“If the executive power, including the police, did their job, StopKham would not exist,” says Chugunov.

But the group's enemies extend beyond the Kremlin. StopKham’s videos have featured scores of Russian celebrities, including director-cum-politician Nikita Mikhalkov and, more recently, the Olympic gymnast Alexei Nemov. More often than not, those who come into contact with the group want it shut down.

While the list of enemies is growing with every StopKham stunt, the movement has also lost its main ally with the departure of Surkov and the Kremlin’s overall change in policy.

“The Kremlin has focused its efforts on a more repressive apparatus, using it against political opponents, while negotiating with the systemic political opposition,” says Tatyana Stanovaya, an analyst at the Center for Political Technologies. 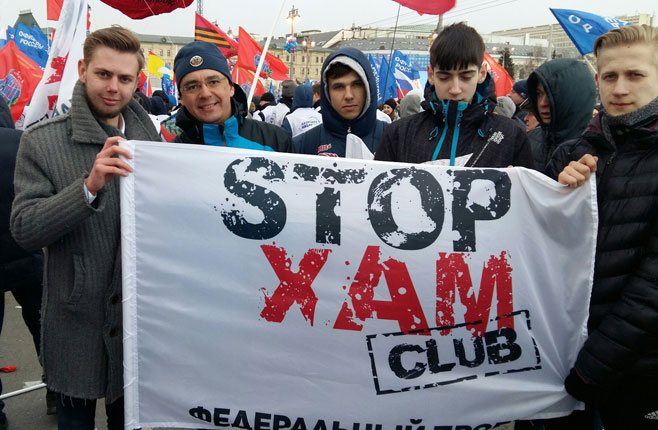 StopKham targeted, in February, the driver of the head of Prime Minister Dmitry Medvedev's secretariat.

“It is a form of compromise between the civil authorities, understanding the need to maintain a decorum of democracy, and the siloviki [Kremlin hardliners with security or military backgrounds],” she says. “There is very little room for independent activism in such a system.”

According to political analyst Oreshkin, the Volodin-era has heralded the sedating of all societal activity, regardless of political color.

“The message is that they want a Soviet-style system where everyone sits tight and stays put,” he says. “From that perspective, StopKham is just as irritating as, for example, Alexei Navalny’s anti-corruption activities.”

But pulling the plug on StopKham might, by now, be more complicated for the Kremlin than simply cutting off its funding. The group has continued going on patrols and could fund itself by monetizing its YouTube traffic.

Shkumatov says the Justice Ministry’s move has actually helped to boost StopKham’s brand by ridding it of its pro-Kremlin image.

"StopKham is proving that it won't go for success on the backs of ordinary people," he says. "That's eliciting sympathy."

Chugunov insists he is unconcerned about losing his standing in the corridors of power.

“It’s nice to be supported by the government but it’s much more pleasant to feel the support of the people,” he says. Since 2014, he has been a member of the Public Chamber, a consultative body to the Kremlin. And his ambitions don’t end there.

When asked about his future career plans, Chugunov looks toward the ceiling. “I’m aiming for somewhere up there,” he says.

The former Nashi activist says his future voters are now in their late teens and early twenties. “We speak the same language,” he says. As for the “Soviet-era behemoths” who, in his view, are incapable of changing their corrupt practices, “time will gradually see them leave their posts.”

But just as Chugunov’s rhetoric begins to sound eerily similar to that of the opposition activists he once fought, he changes tone.

“That doesn’t mean we should sit back and wait,” he says. “Putin can’t do everything alone.”

Ordinary Russians do not enjoy the right to bear arms, but Moscow police appears to be dismissive of those who do it anyway, a pro-Kremlin activist...
news

It may not be the most appealing kind of activism. But it certainly makes for interesting, and often viral, YouTube footage.
official census

The head of the Russian Republic of Chechnya Ramzan Kadyrov criticized Polish Prime Minister Mateusz Morawiecki on Saturday for comments he made in support...