Prime Minister Dmitry Medvedev tried to put a positive spin on it, but the numbers were hard to ignore. Just two years ago, in the emotional high that followed Crimea’s annexation, Russia’s 10-year space program was promised a full 3.4 trillion rubles (then around $70 billion). By the time Medvedev got around to approving the program, the budget had been reduced to mere 1.4 trillion rubles ($20.5 billion).

It was the latest reminder that Russia’s finest days in space are long gone. The nation that launched Sputnik and Yury Gagarin now, most likely, faces a future of uncertainty. Its former rival, the U.S. space agency NASA, is now its main partner. And against NASA’s budget of $19.3 billion in 2016 alone, Russia’s space agency Roscosmos may fall so far behind over the next decade that avenues of future cooperation become hard to find.

At a meeting of the Cabinet on March 17, Roscosmos head Igor Komarov outlined the broad terms of the new 10-year plan. No specific breakdown of the 1.4 trillion in funding was given, but Komarov identified key strategic focus points “guaranteed to ensure the development of national cosmonautics and minimize risks and losses of position in this sphere of activity.”

The first such point is the preservation and expansion of Russia’s constellation of satellites in orbit, an area of space activity that has the most immediate commercial and political impact. Under the plan, Russia’s satellite fleet will increase from 50 to 73 (this figure excludes satellites under Defense Ministry control).

Komarov said conservation of the satellite fleet is important to Russian national security, since it ensured independent earth observation information and communications capabilities. The value of independent satellites is greatly diminished without the ability to launch them, and Komarov said measures will be taken to ensure the health of the rocket production industry.

This mostly involves consolidation of the decaying space industry into a tighter organization of interrelated enterprises. Rocket production will be streamlined — instead of building 12 different types of vehicles for similar missions, there will be just six key types. Further developmental work on Russian rockets will now focus on just two design families: the famous Soviet-designed Soyuz, and a new Angara family of launch vehicles.

These efforts fall well within Russia’s already established areas of space activity. But it is an area where it is fast being outclassed by the likes of U.S. private space company SpaceX. 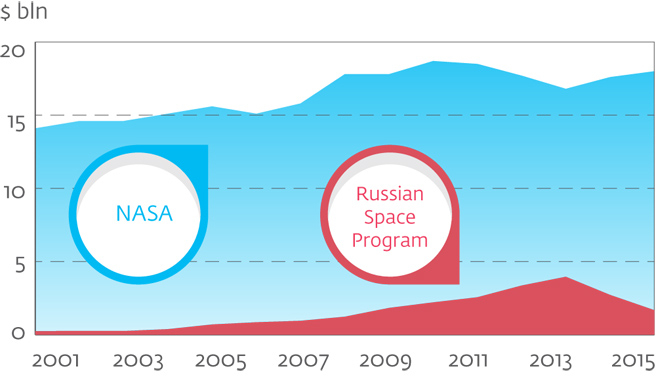 The disparity will only increase over the next two years, as SpaceX and U.S. aerospace giant Boeing begin flying new manned spacecraft for NASA. This will free NASA from reliance on Russia’s Soyuz to launch astronauts into space — a loss of around $500 million for Russia’s space program.

Komarov says that Russia will, in 2021, begin testing a new manned spacecraft called Federation, a replacement for the Soviet-designed Soyuz. A manned flight will take place by 2023, he added. Taken as a whole, the 2025 program is supposed to lay the groundwork for “full-scale lunar exploration after 2025, and landing a man on the moon by 2030.”

It is less clear is how they can realistically accomplish that goal. Russia would need heavier rockets than it currently has. It is not known how much Roscosmos is investing in building such a rocket, but the original draft allocated some 700 billion rubles ($10.35 billion). In a later draft, the number had been “optimized” to 60 billion rubles ($887.4 million).

Such an amount is most likely insufficient. NASA estimates development costs for its own new rocket — the Space Launch System (SLS) — in the region of $12 billion. Independent estimates put the number higher. It is, however, conceivable that Russia could cut costs by developing a super-heavy rocket based on the Angara design.

Komarov also promised that Russia will at last complete its segment of the International Space Station, a $150 billion project with NASA. Russia has three space station modules still on the ground after years of delays.

Analysts were most disappointed by the low priortity given to research in the program. Space research has suffered greatly since 1991: Funding has largely been focused on rockets and spacecraft that can be sold on the commercial market to attract funding from non-state sources. In the last 10-year program, Roscosmos tried to reverse this, but high-profile missions like the Phobos-Grunt probe in 2011 failed to even leave Low Earth Orbit.

In the 2025 program, Roscosmos is retrying a number of these projects, or rolling projects over from the 2015 program. But Dr. James Oberg, a former NASA engineer and commentator on the Russian space program, says these alone are insufficient to stimulate a revival of Russia’s once pioneering space science program.

“Talented people will look elsewhere, both inside Russia and outside it,” Oberg said. Young engineers won’t want to work for an obviously struggling industry, no longer cutting edge. “Russia is becoming more and more of a sideshow,” he said.