The first thing you need to know about Kommunalka is that this restaurant is not about gastronomic pleasures, but about nostalgia, a longing for things past. Kommunalka means "communal apartment," an apartment shared by two or more families. This kind of housing was widespread in the Soviet Union until the 1980s.

An appeal to the Soviet esthetic has been tried before, most successfully at Kamchatka, a notorious bar by Arkady Novikov. Judging by the bike chained to the staircase at the entrance of Kommunalka, the owners have borrowed freely from Kamchatka's design.

The difference is that Kommunalka took Soviet aesthetics all the way. It looks so authentic that it's hard to believe it's 2016. The restaurant is in an actual communal apartment, with its original layout and even some of the décor, like walls covered with 1970s newspapers. There's plenty of other paraphernalia — old radios and television sets, scales, jars with pickles, and other Soviet markers. 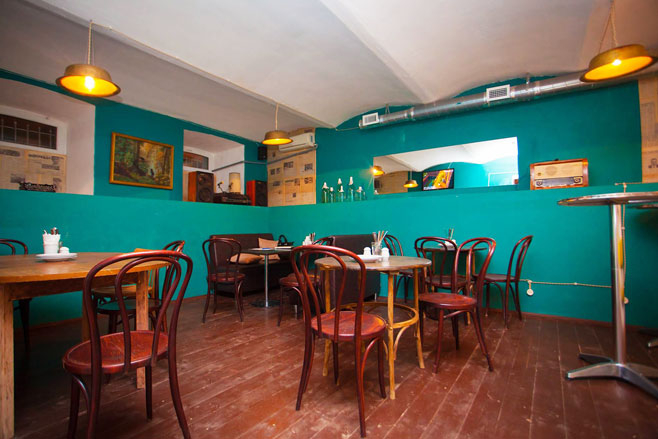 Soviet cuisine is a collection of dishes from various national cuisines of the Soviet republics, and Kommunalka makes a decent attempt at getting the best of them on the menu.

But Kommunalka does have one innovation that never existed in the Soviet times — a salad bar. It's spread out in an old glass display case in the first room of the cafe. The case has all the Soviet classics: salad Oliver, vinaigrette (boiled beets, carrots and lots of vinegar), mimosa (canned fish, potatoes and eggs), and various kinds of pickles — all for just 85 rubles for 100 grams.

The main room looks like a kitchen with gleaming utensils everywhere, a small collection of samovars and some linen drying on a line in the corner. There are traditional dishes like borsch and shchi in small pots (170 rubles), but you can also try some half-forgotten dishes like "yozhiki" (hedgehogs), oval meatballs with rice served in tomato sauce (380 rubles), and "makarony po-flotski" (macaroni navy style) — which is pasta with canned meat (390 rubles).

Kommunalka also has a long list of homemade vodka infusions; you can try any five of them for just 500 rubles. Don't miss quince, prune and chokeberry.

Have Your Cake and Eat it, Too: Moscow's Best Bakeries

Muscovites with a sweet tooth have never had it so good. Gone are the days when every pastry was filled with tvorog and a croissant was a rare find...
news

When you cross a theme park with a top chef, you get Monster Hills, a restaurant where the d?cor and food are designed to be yucky-scary.
news

It is fitting that an exhibition about the impact of travel and transportation on Russian life should itself undertake a physical journey.
one way ticket