Sometime around Feb. 20, a new work of art appeared behind the protective grid of a power box in central Moscow. In flaming red, yellow and black, the work sketched out the outline of a man's face, with sunken cheeks, dark, accusing eyes and lips sewn shut with a coarse thread.

Few of the passers-by realized that the image behind the grid was of shock performance artist Pyotr Pavlensky, a man currently imprisoned for setting alight the doors of the headquarters of Russia's security service. After all, in a country where the Kremlin decides what information Russians receive, Pavlensky is a complete stranger to all but the initiated.

Perm street artist Alexander Zhunev, 31, wanted to change that. Speaking to The Moscow Times, he said that his symbolic decision to place an iconic portrait of Pavlensky behind a metal grid was "an act of solidarity for those who are trying to expose the regime's failings."

It took 24 hours for police to arrive on the scene, only to find that Zhunev had locked the grid with a padlock. In desperation, the policemen resorted to spray cans to paint over Pavlensky's face through the barrier. Zhunev loved it. A photographer's snapshot showed the policemen looking very much like the vandals they were supposed to be fighting.

Zhunev belongs to a group of graffiti and street artists who use Moscow as their canvas to spread social and political messages. They form part of an underground community dressed in hooded sweatshirts and working under cover of darkness. When the sun rises, some return to regular office jobs — with only traces of paint under their fingernails offering a clue as to their night-time activities.

The Root of Rebellion

Graffiti had a late start in Russia. Most of the street artists working today began their careers only in the post-Soviet 1990s. As graffiti culture washed over from the United States, Russian youth became infected with the virus of rebelliousness.

After decades of subordinating to the collective, graffiti provided a tried and ready way of demonstrating individuality. Hooded Russian youngsters took to spray-painting suburban trains to declare loyalty to gangs or football clubs. Groups tried to outdo each other's peacock designs, "in the same way that cats mark their territory" says the artist Ivan, who belongs to the ArtVandal duo. 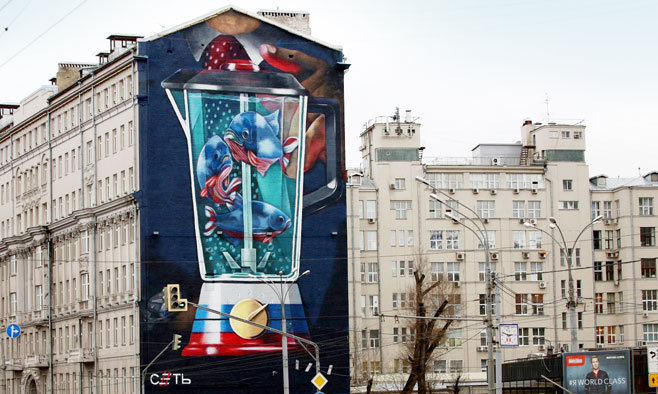 From the outset, graffiti artists have worn the label "deviants" with pride, and one of their most frequent targets is the state railway company, Russian Railways. They say that "train bombing," as the practice of covering trains in graffiti is known, isn't just about the rush of adrenaline. It is also about indirectly targeting the Kremlin, and challenging the status quo.

"It's a gray morning. You're standing on the platform. You're thinking about your job. And then a bright-colored train shows up, sprayed with words you can't read," says Misha Most, a prominent street artist. "That moment could change you. It gives you the idea that the system is optional."

In the early 2000s a crew of graffiti artists began working together to cover the cities of Moscow and St. Petersburg with the word ZACHEM. In Russian, this translates as "Why?" or "What For?." Before long, the five-letter word confronted Russians from bridges, roads and central buildings as they went about their daily business.

No one knew what it was about. Some wondered whether the word was a criticism of Putin. Others speculated the word was a comment on the (lack of) merits of the structures on which it was sprayed.

One of the founders of the movement, who asked not to be named, said ZACHEM was meant to make Russians rethink what they did in all spheres of life. "We were asking why people do what they do," he said. "You have a choice in everything you do: to do or not to do it."

Many of the first generation of graffiti artists, including those belonging to the ZACHEM crew, went on to expand their technique, using images and sometimes installations as a simple way to share their message with the public.

"I'm not a [Franz] Kafka, I can't sit and write at a desk. I want my message to be heard. That's why I draw outside," said street artist ZOOM.

Perhaps the most famous Russian street artist is P-183, a young man who gained fame in the 2000s with anti-establishment protest works. In one of his most famous projects, he plastered images of Russian riot police officers on the doors of a Moscow metro station. Commuters had to push back on the policemen to continue on their way — in a reminder of popular resistance against the 1991 attempted coup. P-183 said his goal was to "teach people in this country to tell lies from the truth and bad from good."

P-183 died several years ago, but his legacy continues in the work of artists like ArtVandal. 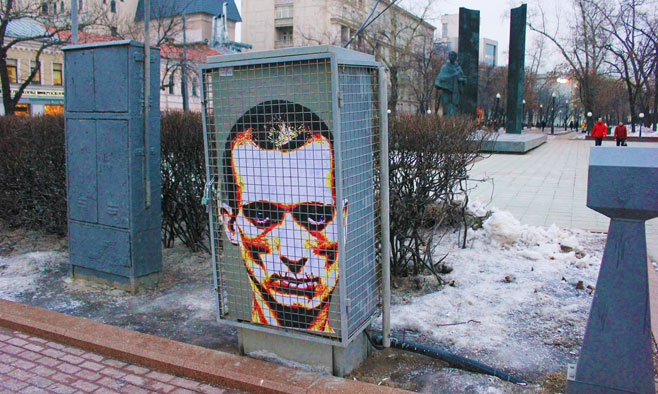 Zhunev installed his portrait of performance artist Pavlensky behind a secure grid in central Moscow.

At the height of the Sochi Olympics, ArtVandal plastered the capital with an image  of five piggy banks in the colors and constellation of the five Olympic rings, to protest state spending and corruption. Another work showed a Sochi Olympics branded glove with raised middle finger. ArtVandal had prepared their defense of the piece should they get caught by the cops: "We would just say that it's a 'F*ck you' to the world, not to Russia!" said ArtVandal's Andrei, breaking into laughter.

Not every street artist is as explicit. Misha Most, for example, says street art should allow the passer-by to make up his or her own mind on the message. "I don't want to be a propagandist for one side or the other," he said. "I want to make people think."

In a work called "Constitution," he spray-painted the full text of several articles of the Russian Constitution onto walls around Moscow. One of the works reproduced the article on freedom of speech in a location only several hundred meters away from the Kremlin.

"It reminded everybody — policemen, passers-by, everyone — that this is our constitution," he said.

Sixteen years after its founding, ZACHEM is still alive — but the city has changed.

When Misha Most, 35, started out in 1997, he said, the city's authorities "could barely afford to put lightbulbs in street lanterns." So, while non-commissioned graffiti has always been illegal, the city's response was slow and uncoordinated.

Today, the authorities are sharper — it takes them a day on average to paint over fresh street art or graffiti, but if the image is politically or socially sensitive, they are even quicker.

Those caught redhanded can face a fine of up to 40,000 rubles ($524), which is more than the average monthly wage. But if the graffiti is political, or can be described as "vandalism" of state infrastructure, a three-year prison sentence comes into play.

More worrying to some, however, is that the authorities have entered the realm of street art on its own terms. New murals have appeared across the city promoting "sober Russia" and healthy lifestyles. In style, they are little different to Soviet-era propaganda campaigns on good conduct. 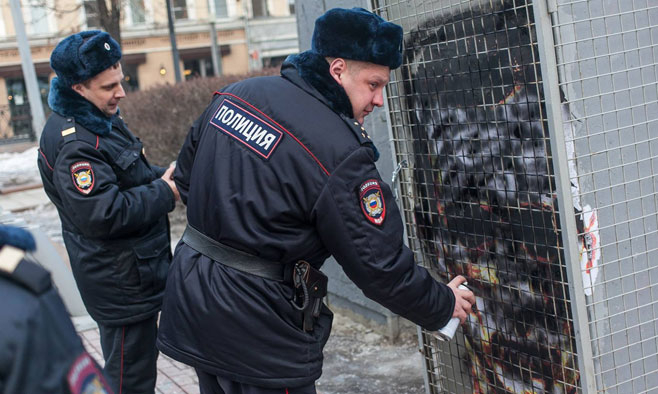 Unable to remove the metal barrier, police used spray cans to get through the grid.

But some of the new murals promote overtly pro-Kremlin political messages. Following the annexation of Crimea in March 2014, some walls in the city center were plastered with the slogan: "Russia and Crimea — Together for Always."

As the Russian economy nose-dived, a painted work told Muscovites "there are more important things than the stock market."

And residents of Moscow's central Prospekt Sakharova now look out onto a gigantic image showing a hand hovering over the ON button of a blender painted with the Russian flag. Inside the blender are piranhas in American stars and stripes.

An obscure patriotic group called SET is behind all three of the pro-Kremlin murals. When contacted by The Moscow Times, SET declined a request to comment, but a statement on the group's website said the painting of the blender was a "metaphor for the world."

For many street artists, the new activity is a sign that pro-Kremlin movements are using street art to further their own agenda. "We're heading to a point where Putin will look down on us from every building," said Andrei, 27, of the ArtVandal duo.

The introduction of large sums of money into the street art scene has put the community on alert, and led to deep division. Many of the painters who are commissioned by City Hall and commercial clients once belonged to the underground graffiti scene. Some of their friends now accuse them of hypocrisy for "train bombing" at night and working for the government during the day.

Misha Most says that by employing former illegal street artists, city authorities have also gained power over the community. "One of the best ways of neutralizing the street art community is to put it into a reserve and control it from there," he said. "Just because it's painted on a wall doesn't make it graffiti," he added.

With money to be made from legal art, and authorities stepping up their game, there are fewer and fewer incentives for executing illegal art in Moscow. But that has not stopped a generation of graffiti artists from coming to the fore.

Fyodor Korotayev, who heads the city's amenities inspection service, told The Moscow Times his department had already recorded 300 instances of illegal graffiti in the first two months of the year. Most of it is being done by young teenagers.

For the underground scene this is good news. "Russia has many blank walls," says ArtVandal's Ivan.

Out of all the remaining blank walls in Moscow, there is one that would be "perfect" for painting, his companion Andrei said with a twinkle in his eyes — the pristine white ones of the White House, the main seat of the Russian government.

A Russian graffiti artist who painted a mural depicting the first man in outer space — Soviet hero Yury Gagarin — crucified on a cross on Orthodox...
news

2 Million Ruble Patriotic Graffiti on Crimea Painted Over in Moscow

A graffitied wall bearing the words "Crimea and Russia together forever" has been painted over in Moscow, much to the disgust of the pro-Kremlin...
news

Moscow Court Rules to Keep Pavlensky in Custody Until March