As Muscovites were recovering from the shock of the sudden demolition of street retail properties, launched overnight by Moscow authorities, and the wreckage was being cleared, the retail property market took stock of the situation and attempted to assess damages.

Around 100 kiosks, pavilions and small shopping centers, which according to Moscow officials had been constructed without permission, were demolished, predominantly around metro stations. Because demolished premises made up no more than 50,000 square meters of retail space altogether — slightly over 1 percent of Moscow retail space — one wouldn't expect a dramatic impact to the retail real estate market.

However, real estate experts told The Moscow Time that the wave of demolitions — set to be continued — will certainly reduce the number of small businesses in the retail industry and will result in an increase in rental rates near demolished pavilions, despite an overall plummeting demand for retail space in Moscow.

Displaced tenants will try to secure comparable retail space near their demolished premises. This will increase rental rates in these areas up to 10 percent, according to Ekaterina Podlesnykh, head of street retail at real estate agency Colliers International. Yulia Nazarova, the head of the street retail department at consultancy JLL, estimates that rental rates for premises less than 100 square meters will increase 20 percent.

This is not the first time this has happened in Moscow. Mayor Sergei Sobyanin began fighting street kiosks in 2010, and the street retail market responded to the razing of around 500 kiosks with an immediate rise of rental rates.

There is plenty of vacant retail space in Moscow nowadays. Retail real estate is in sharp decline due to sales resistance, which only shrank 10 percent last year. The total volume of free space in Moscow shopping centers reached 700,000 square meters — three times more than during the financial crisis of 2009 — and the vacancy rate grew to a record-breaking 13 percent, according to Knight Frank real estate agency.

Street retail has also suffered and hit a vacancy rate of 11 percent by the end of 2015. Toughening city-parking policies, affecting stores' traffic, added to its hardship. 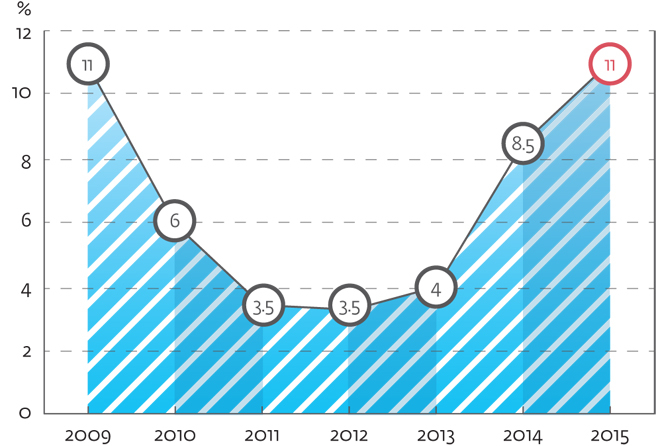 The drop in demand resulted in drops to rental rates by up to 30 percent over the year, according to Podlesnykh, and the market adjusted. For instance, the city center saw rapid development of low-price food retail chains, that previously could not afford prime locations.

The migration of tenants could reduce Moscow's street retail vacancy rate by 1-2 points, said Podlesnykh. However, not all will be able to find new premises and survive, due to specifics of their businesses — usually occupying very narrow spaces of about 20-40 square meters and enjoying huge foot traffic, which garnered them profit despite high lease rates. Foot traffic near metro stations reaches 10,000 daily, according to Nazarova.

But civilized ground-floor retail space offers mostly 50-square-meter premises and larger, with much lower foot traffic. Shopping malls might also not be the option. Offering 100-square-meter outlets on average, they prefer chain retailers to independent stores. Moreover, in some central areas there are no shopping malls.

So the effect will differ from one city area to another. Maryino in southeast Moscow — overloaded with small retail and a number of shopping centers — will hardly notice it at all, Viktoryia Kamliuk, head of street retail at Knight Frank said.

But even if the current crackdown on trade pavilions — whose tenants claim to have all necessary paperwork — won't seriously impact the market, the players may start worrying, especially those who fall into at risk groups.

"They started to demolish small shopping centers that had all necessary paperwork but were positioned on utility lines," Ilya Kuznetsov, deputy head of strategic consulting department at real estate agency Cushman & Wakefield, told The Moscow Times. But there certainly are other comparable retail properties in Moscow. Will they be demolished too? "Where is the limit for Moscow authorities' tolerance toward property rights?" Kuznetsov said.

Such concerns are also sparked by the news that the current demolition wave is just the beginning. The City Hall's initiative has been greeted warmly by the Kremlin and has already been copied in other Russian regions.

It's not only tenants who have been affected by demolition. The commercial insurance business will tread with greater care — taking into consideration the possibility of sudden demolition, Pavel Lipatov, head of property and liability insurance department at Evro-Polis, told The Moscow Times.

Furthermore, there is reason to wait for new products to appear on the insurance market, such as insurance to cover unforeseen demolitions.

As Russia veers toward a recession, rental rates at warehouses in the Moscow region dropped to a five-year low in the first quarter of this year...
news

Retail sales in Russia dropped by 15.3 percent in December 2015 compared to the same period in 2014, the Rosstat state statistics service said Monday.
news

The owners of the street shopping pavilions subject to demolition have no right to hide behind ownership rights that have been obtained illegally, Moscow...
diplomatic freeze