“Some of the boys called my son “Obama’s little spy,” says Jynks Burton. “But they’re at that age I suppose, always looking for something to tease other boys about …”

Burton’s eight-year-old son, Alex, makes a scowling face. He says he doesn’t want to talk about the incident. The boys were “just stupid,” he says.

So far it’s the only incident stemming from their son’s nationality. But Burton admits she is worried poor relations between her native and adopted countries might eventually spill over onto the playground.

Jynks and her husband Steven Brown are longtime residents of Russia, having first arrived in the country as U.S. Peace Corps volunteers 16 years ago. Today, they have two children in the Russian school system and are, they say, happy with the experience. “The education is rigorous, focused on knowledge and discipline,” they say.

What the Russian system might lack — “independent thinking and creativity” — the Burton-Browns are happy to fill in themselves at home.

Sitting at the kitchen table in their apartment, Alex is working on constructing a World War II tank. They build many military models together now, his father says.

He asks his son if he would like to go to an American school. 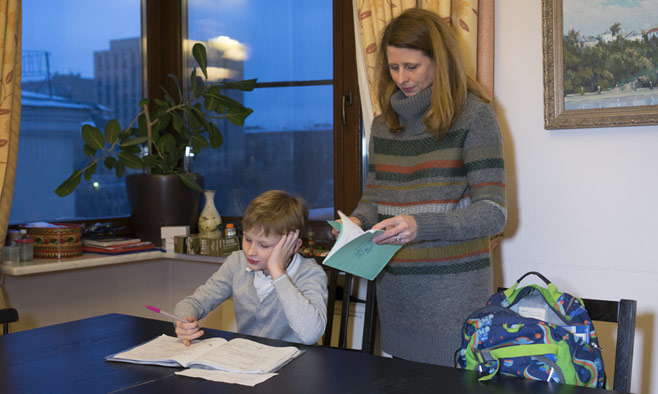 Jynks Burton and her son. Burton and her husband Steven Brown first arrived in Russia as U.S. Peace Corps volunteers 16 years ago. They have two children in the Russian school system.

Families like the Burton-Browns are an increasingly rare sight in Moscow, as economic and political headwinds continue to push foreign nationals out of Russia. According to official migration statistics, an astonishing 74 percent of British and 67 percent of U.S. expats left Russia in 2015 alone. This follows significant reductions in 2014, too.

Of those who have stayed behind, a majority chose to send their children to one of several well-respected, but expensive international schools.

But some decide to follow the Burton-Brown’s example and try the Russian state system. Overall, the experience is positive. It is free, the education is usually excellent and, this way, children are able to experience full Russian linguistic and cultural immersion.

“We knew that we were going to be here for longer than two or three years. So it seemed like a good idea to go the Russian route, and we really liked the kindergarten here,” says Davina Garrido De Miguel.

De Miguel and her partner arrived in Moscow in 2006, attracted by what she describes as the city’s “artsy” vibe. “I was incredibly bored in London, it was way too artificial,” she says. She now runs an art studio and classes for expats and Russians, rents a 19th century apartment in central Moscow, and sends her kids to a school less than 100 meters away.

De Miguel says the education is at least as good as at home. “My father had a language school in Kent and he used to have many Russian students. He said that of all the students, the Russians were the best at learning and taking in information. That is because the Soviet education was excellent, and it remains so,” she says. “I have three boys and they need discipline. That’s what a Russian education provides.” 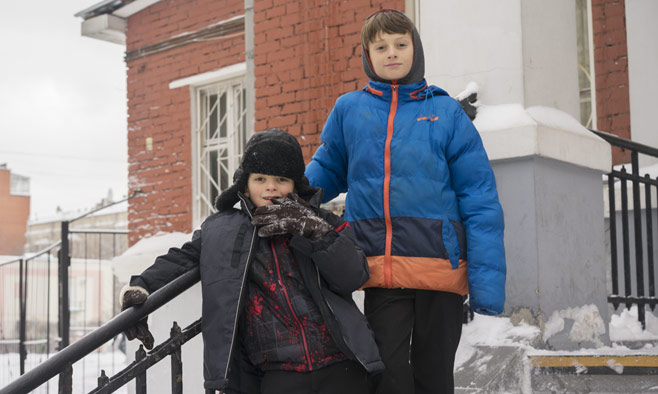 Two sons of Davina Garrido De Miguel on the steps of their school.

The no-nonsense nature of Russian education can come as a shock for the unprepared. Even after six years of Russian schooling, Moscow parent Lara McCoy says she still finds some of the practices surprising.

“Everything is so public,” she says “In the United States when you have a parent-teacher conference, you are one-on-one with the teacher. And here at the parents’ meeting, the teacher talks to the whole class about everybody’s kids. Very awkward.”

McCoy’s main aim in sending her children to a Russian school, she says, was to make them bilingual. She says language is the greatest challenge for parents in dealing with the system.

Local bureaucracy is also, it seems, becoming more burdensome. Lawyers from the Civic Assistance Committee suggested that some foreign nationals have experienced trouble enrolling children in Moscow schools and nurseries. Some schools have demanded parents be permanently registered in Moscow, which can be difficult for recent arrivals.

De Miguel reports that three friends struggled to find nurseries last year. “It seems the authorities have introduced something of a ‘Moscow for Muscovites’ policy,” she says.

And Camilla Jones recalls how her attempt to place her son Alex, then a four-year-old, in a Russian nursery school ended in “disaster.” 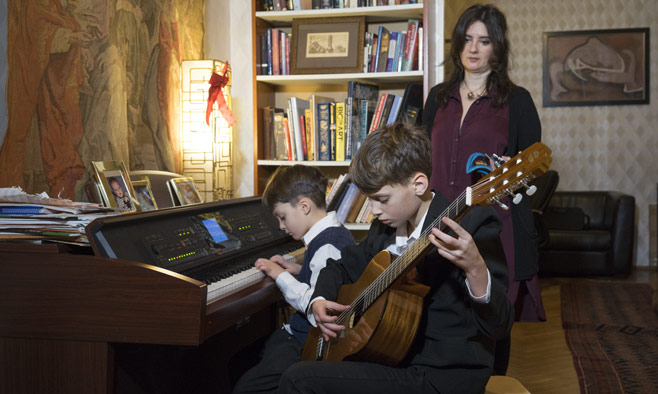 Davina Garrido De Miguel with her sons, who attend a music school near their home. She was first attracted to Moscow for its “artsy” vibe and now runs an art studio, offering classes for expats and Russians.

Camilla and her husband took over a year to get their son into the nursery. “They said the schools were oversubscribed, but we realized they treated foreigners differently — we were not a priority,” she says.

When the Jones family eventually found a place in a nursery school, things did not turn out well. The nursery school teacher was inexperienced, she says, and did not know how to deal with foreign children. Alex “lost all confidence” speaking Russian, she says.

After only two months, Camilla received a phone call from the mother of one of the other children at the nursery. Something had happened at the nursery. Alex had bitten another child, and the mother was now threatening to call the police and sue. Jane and her husband were horrified. They decided to take Alex out of the nursery school immediately, and search for a new private school where they had experience with international children.

Over the years, Alex has changed schools several times, but is now happily studying at an international school in Moscow. Camilla decided to send her two-year-old daughter straight to the international nursery school.

“The experience made us very sad, but we figured, without Russian, we would always be viewed as ‘the foreigners,’” she says.

Some names have been changed.

All Russian students will be required to learn two foreign languages before graduation, Education and Science Minister Dmitry Livanov was cited as saying...
news

Why Expats Are Still Fleeing Russia

Every Western expat seems to know someone who has left Russia. An economic slump and increasing political and cultural isolation have transformed an expat...
opinion

The past year has seen a considerable exodus of expatriate, white-collar workers from Russia, and in most cases this has been involuntary.
'great concern'

A force of up to 8,500 U.S. troops is on "heightened alert" for potential deployment in response to the Ukraine crisis.