A rehearsal is being held in a large hall — light streaming in through floor-to-ceiling windows onto the performers. Some dance, some sit sprawled across the floor watching their compatriots. “Kostik, stand up, you’re going to get cold,” the choreographer scolds. A young man slouched on the wooden parquet rises, shooting another performer with imaginary pistols before goading him into wrestling — they are ignored. After grappling briefly, they embrace before returning their attention to the proceedings.

Choreographer Margarita Rebetskaya is conducting a weekly rehearsal of Cinderella: her personal project for over a year with the Open Art Theater troupe. This theater company is made up entirely of performers with Down Syndrome. Gently, she coaxes and encourages each performer across the stage. When the lights go up, she hopes they won’t just be judged as people with Down Syndrome — but the dedicated dancers they are.

It is this emotion and progress that Alexandra Dalsbaek, 28, is desperate to catch on film. With Margarita, she wants to showcase the team’s Cinderella performance to the world.

“I first came to the rehearsals last winter just to take some photos, and I enjoyed the positive atmosphere here very much,” says Dalsbaek. Born to French and Russian parents, she had lived in France for most of her life with only the occasional visit to Russia before moving to Moscow about 18 months ago.

She has been working with the troupe for a year — shooting a documentary about the theater, the performance and the performers. Since starting as an observer, she has become a pseudo-volunteer, and considers her film project a tool to promote tolerance in Russia, where society does not yet treat people with disabilities as normal people — at least not to the extent the West does.

Dalsbaek believes that society’s tolerance of people with disabilities can be changed with the help of public campaigns that incorporate cinema, inclusive schools, theater programs like Open Art or dance projects like Rebetskaya’s Cinderella.

“I’m not trying to pretend that I can change the whole society of course, but I want to participate,” she said.

The Open Art Theater was founded in 2001 by professional musician Oksana Tereshchenko. Theaters that engage people with Down Syndrome are rare in Russia — Tereshchenko knows of only a couple comparable theaters in the country.

A music conservatory graduate, Tereshchenko started off teaching flute at the Down Syndrome Association Art Center. The class eventually grew into a theater dedicated to involving those with Down Syndrome in the arts.

After several years of self-sponsoring the theater, she turned to foreign friends for funding assistance and was introduced to the Britain-based charity Action For Russian Children (ARC). The ARC, alongside the British Women’s Club and private donors, has been the theater’s primary sponsor ever since. 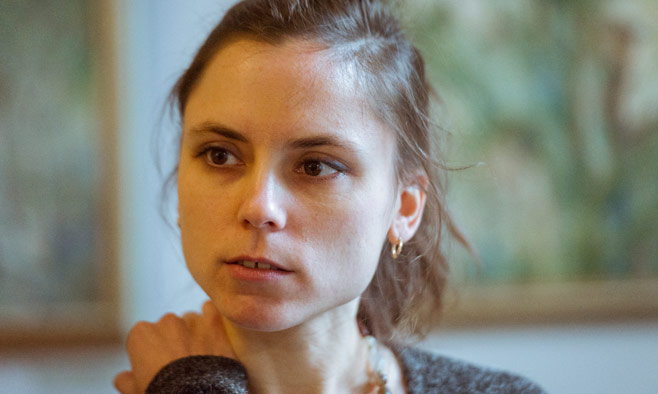 Alexandra Dalsbaek first visited the Cinderella rehearsals to photograph the performers. She is a friend of the group’s choreographer.

Recently, theater director Tereshchenko has struggled maintain funding for her theater — it is difficult for the ARC to continue working in Russia as financial aid volumes have shrunk significantly. “It’s hard to say why, but I believe it’s because of the crisis and all the changes in the Russian legal system,” she said.

While Russia remains well behind others nations in their treatment of people with disabilities, conditions have changed rapidly over the last few years. State funding for special treatment programs has tripled since 2006, and charities began flourishing in Russia in the mid-2000s — on the corporate as well as the personal level.

Western charitable organizations served as role models, says Maria Chertok of the Charities Aid Foundation (CAF). They introduced the culture of collecting and distributing funds, as well as charitable values, principles and approaches — this Western influence was of great importance.

A longtime advocate for those with special needs, Denise Roza has worked in Russia for over two decades. “Foreigners role in tolerance towards special people promotion is less important now — there are people here who can stand for their rights, can educate others and change their attitude. The situation was completely different 20 years ago,” she told The Moscow Times.

An American, Roza studied Russian in the Soviet Union in the mid-80s, returning to the country in 1989 to become the resident director of a language study program for three years. She found her calling when she joined the Moscow office of the U.S.-based World Institute on Disability (WID) in 1994.

Following the closure of the WID, Roza established the non-profit organization Perspektiva in 1997. Perspektiva aims to improve disabled people’s quality of life within Russian society through various programs: inclusive education, legal advocacy on disability issues, employment for the disabled and the improvement of public awareness.

Roza recalls speaking with a government official about 15 years ago regarding the introduction of a special bus for the disabled: “The bus route included three stops: a person’s home, clinic and pharmacy. I asked him — okay — and what about school, workplace, a friend’s home or other places a person would like to go? People thought a pharmacy and a clinic is all a disabled person need in his life. The stereotypes were very strong at the time, no one thinks like that anymore.”

Her organization now boasts a team of about 70 people — most have a disability of some kind. Their participation is a crucial part of the NGO’s social approach and independent living philosophy. Roza believes that by his or her own actions, those with a disability can improve their self-esteem while dismantling societal stigma against the disabled.

When compared to Western societies’ tolerance and understanding of disabilities, Russia has significant ground to recover. “I think there was a significant difference in tolerance level towards people who are different in Russia and the United States. In some fields it was 10 years behind, in the others more. In the United States, an openness policy towards people with disabilities was introduced in the sixties, … but there was nothing like that here in Russia,” says Roza. 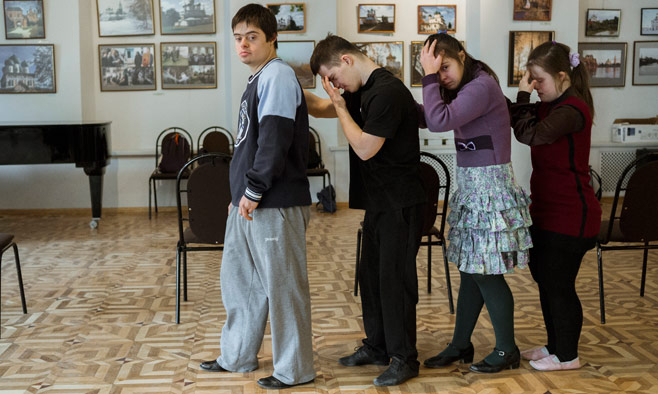 Open Art Theater performers during a rehearsal for a play. The theater was founded in 2001 by professional musician Oksana Tereshchenko.

Perspektiva has been successfully cooperating with state institutions and receives government grants which have allowed them to continue their work despite a recent drop in foreign funding.

Foreign funding has decreased for various reasons, the CAF’s Chertok said. Charities have felt the effect of political events — to some extent. Many charitable foundations in Russia simply stopped accepting financial aid from the West, assuming the foreign agent legislation that was enacted in 2012 would hinder their work. The so-called “foreign-agents” law requires NGOs to register as foreign agents, an undesirable epithet, if they receive foreign funding and engage in vaguely-defined political activities.

But the decrease in Western involvement in Russian charities primarily results from the improvement of the Russian economy. When Russia’s appearance ceased to be that of a poor, needy nation, international charitable foundations moved their funding elsewhere.

Justin Lifflander began supporting the charity Maria’s Children about 15 years ago. The charity helps orphans and disabled children socialize through rehabilitation programs and art therapy. He first supported the charity financially, but wound up volunteering his time at Maria’s Children’s art studio.

“I began to meet the people in her organization and the people they were helping and realized I could do more than just support them financially — that by giving [my] time and sharing my experience and skills, I could directly help others and see the effect. And in the process, I myself was growing as a person,” Lifflander said.

Last year he started regularly participating in the charity’s humanitarian clowning initiative, joining a group of clowns on visits to orphanages, mental institutions and nursing homes.

“How we treat our children is a direct reflection of the moral health of our society. So by interacting with and supporting children who do not have parents, or who have physical and mental handicaps, we are fulfilling a moral imperative and at the same time making their lives brighter, and the world a bit fairer. I think that a passion for fairness and giving is a common thread for all humanitarian clowns,” he says.

The clowns, in particular, have captured Lifflander’s interest with their unique energy and infectious enthusiasm. He says that the experience has even improved his ability to love.

Foreigners have been the driving force behind improving Russian society’s tolerance and understanding of those with disabilities. Over the past two decades, their advocacy for educational programs and rights initiatives has transformed Russian society’s approach towards people with special needs.

Work continues, with foreigners working alongside Russians to better support people with disabilities.

A Russian publishing company has suspended the sale of a social studies textbook that prompted an outcry with its message that people with developmental...
news

Russian model Natalia Vodianova appealed for calm after the owner of a cafe whose staff asked her autistic sister to leave because she was “scaring off...
news

Russia's children's ombudsman has appealed to the Prosecutor General's Office to investigate the apparent adoptions of 11 Russian orphans by U.S....
Wargames

Microsoft warned Sunday that the cyberattack could prove destructive and affect more organizations than initially feared.