"My parents did not want to leave Syria. They waited as long as they could, thinking that the people would calm down. No one was expecting this total psychosis to start, with mass media fueling the situation," says Hasan Khader, who came to Moscow in 2012 with $500 in his pocket.

He said that in Syria he witnessed people being killed by angry mobs just for being law enforcement officers. People in the streets went crazy and the government eventually started to act in the way the media was accusing them of — violently. The level of anxiety and intolerance was too high and it was not safe to stay in the country anymore.

After coming to Russia, Khader quickly found a job as a construction worker. Luckily, he had a Russian passport, as he was born in Moscow to a Russian mother. He tried his hand at several jobs and decided to open open a bar about a year ago — Syrians are traders, he said, and are traditionally good at business.

"We need to support the Assad regime, it's the only power capable of handling the situation. I'm a liberal, but the idea of elections being held now is nonsense; Assad is the most known Syrian politician in the world, he is going to win anyway," Khader says.

He adds that his nation has been living under authoritarian rule for centuries and there is no way for them to change at once. A long transition period is needed, but before that all terrorists in Syria have to be destroyed, at any price, he says.

Refugees from Syria have been flooding to Europe throughout all the years of the Syrian crisis, but this stream has largely been passing Russia by: According to Russia's Federal Migration Service, only 912 Syrian refugees applied for refugee status or temporary asylum between January and August 2015.

There are about 8,000 Syrian citizens with asylum or refugee status, or residence permits living in Russia at the moment, radio BFM reported in October. But these 8,000 constitute only a small part of the Syrians who actually live in the country.

Of all Russia's Arab communities, the Syrian community is one of the largest, says Irina Ahmed Zain Aidrous, Ph.D., a docent at the economics faculty of the Peoples' Friendship University of Russia. There are about 100,000 Syrians living in Russia now, she says. There are about 7,000 to 10,000 Syrians in Moscow alone according to Syrian countrymen association calculations, one of its former leaders Makhmoud Al-Hamsa told The Moscow Times.

The presence of Syrians in the Soviet Union dates back to the 1970s and 1980s. The countries were allies even then, and the Soviet Union accepted many Syrian students via government educational programs, Ahmed Zain Aidrous says.

For that reason, the majority of the Syrians coming to the Soviet Union were mostly either supporters of Syrian leader Hafez Assad — father of current President Bashar Assad — or were loyal to him, local diaspora members told The Moscow Times. 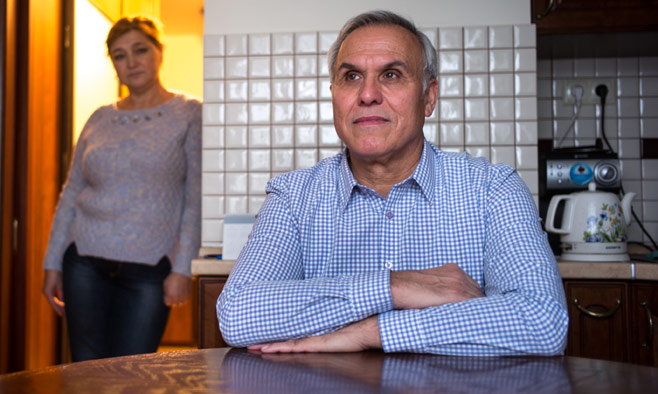 Former TV presenter Nasr Al-Yusef sitting in his kitchen with his wife looking on.

"Bashar Assad is a very well-educated, intelligent and tolerant person," says Musa Azdashir, who has been living in Russia for a decade now. He is an Alawite, as is Syria's current president. But that's not the reason he supports the Syrian leader in the ongoing war, he says.

Azdashir believes that Assad is fighting for the country's independence in a way that no one else is. "I just don't see an alternative. Who else can do what he does?" he says.

Azdashir came to Russia to study in 2005. At university he met his future wife, a French language professor's assistant, and the two got married in 2010. Now they have two daughters.

Azdashir welcomes Russia's military operation is Syria and believes that IS, which he describes as the worst terrorists imaginable, can be defeated by the end of 2016 if international efforts are coordinated with the Syrian government. The other essential moves are to seal the Turkish border and make Saudi Arabia stop funding radical terrorists and supplying them with arms, he says.

"The military operation is a matter of security for Russia. What should Russia be afraid of — more sanctions or terror attacks? Lots of fighters from the North Caucasus have joined IS and they can return [to Russia]. Kadyrov is fighting them and I think he is doing a good job. So I think Russia made a right choice," says Azdashir, following Russia's official position on the Syrian conflict.

Azdashir has an IT-specialist diploma from a Russian university, but getting a job in Moscow proved to be a challenge. "Companies prefer to hire Russians, which I understand perfectly. You have to hire the locals first. It's normal, and I would absolutely do the same in my country."

He works as a freelance Russian-Arabic translator, a taxi driver, and fixes computers for his friends. His wife's salary at the university is about 30,000 rubles ($460), and he finds Moscow's utility payments very high.

"It's not fair when you have to pay that much with such [a low] salary. But I think it's [Prime Minister Dmitry] Medvedev to blame and [President Vladimir] Putin is going to put it right soon" says Azdashir.

Despite the Syrian presence in Russia and long-standing relations, getting the paperwork right for the Syrians who want to stay in Russia is a big bureaucratic problem.

It's 10 o'clock in the morning, but the Moscow city Federal Migration Service (FMS) office is overcrowded. A long corridor on the first floor is filled with people waiting their turn to meet an immigration officer. Jusef, who declined to give his real name for fear of retribution from officials, is one of them.

He's from Syria. He graduated in 2014 as a pharmacist from a Russian university and applied soon after to Moscow's FMS for temporary asylum, which was granted for one year.

This summer he applied for asylum again but was refused. He appealed the decision in the federal FMS office and the decision acknowledged as unlawful. He went to file the documents to the FMS again.

He says that refugees are being made to pay bribes for all paperwork they have to go through. "The first time I applied they demanded 30,000 rubles, 40,000 rubles from me," says Jusef. "How much they want now I don't know. But from the other people I know they asked as much as 70,000 about half a year ago."

After his papers are checked he is sent to get his fingerprints taken and then to an interview with an immigration officer.

"I'm so tired of this, I don't want to go there anymore," says Jusef after the FMS door closes behind him.

Jusef has several part-time jobs as a bartender and a hookah waiter. He says there is no way for him to get a proper job in Russia, because no one will hire him with his asylum status. Legally, people are allowed to work under the provisions of asylum, but many employers aren't aware of that.

"I don't like what the FMS officials do. But I understand the Federal Security Service's policy toward migrants 100 percent. It's good that it's not like in Europe. You have to be careful not to let any terrorists into the country," he says. 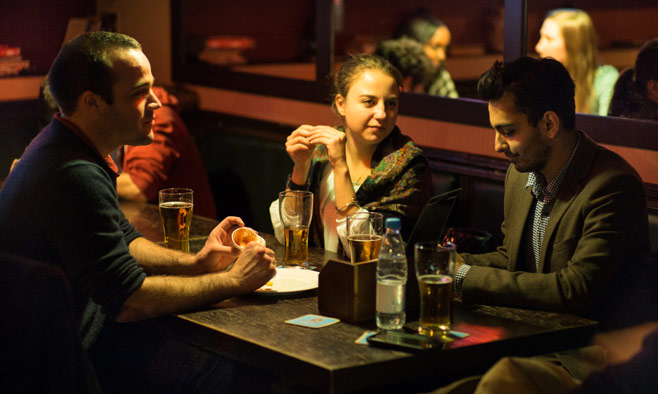 Three friends having drinks in central Moscow at a bar owned by Hasan Khater, who came to Russia three years ago.

The Syrian countrymen association used to provide assistance to local Syrians, but the organization collapsed several years ago after the crisis in Syria started, and a schism emerged between Russia's Syrians. The tensions were too heated for the different groups to keep interacting, sources told The Moscow Times.

On the other hand, the Syrian diaspora as a joint force was never as strong as those of other nationals, the same sources said. Syrians have been integrating themselves into Russian society very well and have not needed to stick together, Ahmed Zain Aidrous says. In Russia there are well-known Syrian scholars, Syrian doctors, Syrian businessmen, and even a politician of Syrian origin — Zviyad Sabsabi, a senator in the Russian parliament's Federation Council.

"I'm a Russian citizen. To me Russia means no less that Syria — my children live here and I want this country to be the best in the world. I love Syria, but I have many more ties with Russia now. It's just my homeland and my people — I feel sorry for them," says Nasr Al-Yusef, who has been living in Moscow for more than 25 years.

Nasr, 62, has two sons, both of whom are doctors: a plastic surgeon and a vascular surgeon. He has devoted himself to his grandson and in his words feels that his life plan has been accomplished.

Al-Yusef studied at the Soviet Union's All-Union State Institute of Cinematography (VGIK), but could not stay because they would not grant him a permit to stay in the country. It was almost impossible to get one for non-Communists, he says. Nasr was not a Communist, nor was he a supporter of the Syrian regime, which hurt his chances of success back in Syria too.

On his return to Syria in 1982 he worked in television, but was not promoted due to being found "politically untrustworthy." At last he found out that he was under surveillance by the Syrian security services and in 1989 he went back to Russia — this time to work.

In 2006 he joined the Russia Today television channel and hosted his own program, Press Overview. But with all the geopolitical changes the reporting became too one-sided, he adds. In 2013 Nasr was fired. When asked why he says it was not about his qualification as a professional.

"It's Russia's very big mistake — to support Assad. He's a real killer. Any other option would have been better than that," says Al-Yusef.

He says he does not understand Russia's approach toward the Syrian situation and believes that Bashar Assad, Iran's ayatollah Ali Khamenei and Iraq's former Prime Minister Nouri Al-Maliki have secretly backed the Islamic State, to make the world choose between them and terrorists. But the world should not take the bait, he says.

Assad is a dictator like his father, and most Syrians wanted him to leave, Al-Yusef explains.

That's why many Syrians have joined armed militant groups like al-Nusra Front: They have nothing to lose and want to avenge their families killed by the regime forces.

The fundamental thing the world powers should do is to make both sides stop fighting each other. After that all problems can be solved one way or another, Al-Yusef says.

"When they ask me who is to blame for what is happening in Syria now, I always say it's 50-50, Russia and the United States. It's just that I love Russia and want it to do the right thing."