Maritime journalist Mikhail Voitenko talks about his self-imposed exile in Thailand, where he settled after reporting on the mystery of the Arctic Sea ship.

Over the years, Mikhail Voitenko has become Russia's main, or perhaps only, commentator on the mysterious, and sometimes tragic, stories taking places on the high seas. Every day Voitenko, who worked as a sailor for 20 years, monitors scores of sources and compiles information about incidents that happen at sea in his online Maritime Bulletin, a one-man decade-old operation and the only one of its kind in Russia.

Voitenko gained notoriety six years ago for his comments related to the Arctic Sea cargo ship, which disappeared on July 28, 2009. The government said the ship had been hijacked near Sweden and freed by the navy three weeks later near the coast of west Africa. But Voitenko, the first person to report on the disappearance, cast doubt on those events and speculated that the ship might have been used instead for illegal arms smuggling.

Fearing for his safety, he fled to Istanbul, later telling Ekho Moskvy radio that "powerful people" had been angry because he kept the story alive in the media. He later left for Thailand, where he has been living ever since.

Here is his story in his own words:

I had to flee Russia in 2009, after the Arctic Sea cargo ship seizure scandal. It had been captured by hijackers near Sweden and freed by the Russian navy near South Africa. The official version was that it carried timber, but I did not believe it and I am still sure the ship was carrying illegal arms to the Middle East.

I was saying that out loud and I still believe I was right. But the Russian officials did not want me to fuel the scandal.

I fled Russia after a phone call with a suggestion to leave the country. I don't know who the caller was, but I had a bad feeling about the call and listened to my intuition.

There were some disturbing signs before the call as well: My neighbors told me that they saw some suspicious cars parked near our apartment building and believed I was under surveillance.

That very same day I bought a ticket to Istanbul and left Moscow. I was going to stay in Turkey for some time, but my Turkish friends told me that Istanbul is the worst place to hide from security service agents.

I decided to move to Thailand. I had lived in the country from 1998 to 2001 while working for a Vladivostok sea trading company. I was more or less familiar with the country and I missed it. So I came to Bangkok.

Some people suggested that I go to Europe and apply for asylum there, but I didn't want to.

Six month after I left Russia, a man who I believe was related to the Russian security services called me and said I did the right thing when I fled. He said that I had made the president and the Russian navy worry with keeping this story alive. And he added that I would be under security services' supervision for the rest of my life.

I'm a professional navigating officer. I decided to be a seaman when I was 9. I was born in the far eastern city of Komsomolsk-on-Amur, and none of my relatives had anything to do with the sea. I graduated from the Higher Naval Engineering School in Vladivostok as a navigation officer in 1981. I worked on merchant navy ships till 1991 and for 10 more years in sea trading companies.

In 1999 I started writing, just as a hobby. But in 2004 I said to myself that I didn't want to do anything else. This idea absorbed me totally and I quit my job. In 2005 I started the Maritime Bulletin.

In 2004 my wife left me with our daughter. I can understand her, any normal woman would have done that.

I lost everything because of my Maritime Bulletin idea. For its first years I was living on the streets starving. I often fainted because of hunger, and I barely survived that time.

For the first time, I appeared on TV in 2007 when Channel One asked me to comment on the Estonia ferry disaster. [See factbox].

The same evening I went to fix a computer for 500 rubles ($20 at the time) and slept on a stairwell there — I was late for the metro and could not afford a taxi to get home, the money was to be spent on food only.

Life got slightly better in 2008. That year the international piracy stories turned very popular in the media, journalists started calling me and I became popular myself.

Several Russian and Ukrainian sea companies have been supporting me financially from time to time throughout the years. There was a consensus in the professional community that independent media like my Maritime Bulletin was needed to report honestly on the industry problems. They were not giving much, just for me to survive and keep the site running.

But in 2014 after the Crimean annexation I spoiled my relations with most of the Russian, Ukrainian and Baltic Sea industry companies. I am against Russia's imperial aspirations, while most of their managers and owners appeared to support them.

I dislike empires because I believe that the imperial economic system is doomed. In the late 1980s, when I was a seaman I used to say that the Soviet Union was going to collapse. Everyone laughed at me, but I could see clearly that the country's economic system was dead on its feet.

To me the greatness of a country is not measured in its size or the number of tanks it has, but in its citizens' quality of life and their attitude toward one another. And also in its economy. If we had a normal economic system in Russia, its merchant fleet could be one of the biggest in the world. But it's not about industry changes — some deep and global changes in the whole country are required.

I have a Thai work visa as a journalist — [newspaper] Novaya Gazeta helped me with that when I left Russia. I don't need to live in Russia for my job. All I need is Internet access and a place to live. I have it all here. I rent a flat with a gym next to the sea for the price of a one-room apartment on the outskirts of Moscow.

I learned how to ride a bike here in Thailand. I enjoy it very much — almost as much as the sea, though the sea is still my greatest passion.

Three or four years ago I wanted to go back to Russia badly. It was not nostalgia, I just don't like the climate here. And in terms of personal freedoms Russia was a much better place than Thailand, you could smoke wherever you wanted, for example. But three years ago I had no money to return, and now I don't want to go back, because of this imperial madness at home.

For a long time I've been planning to start working for Western companies and now it has been a year since I've been earning money from Westerners only.

Information about sea emergencies is very valuable for industry players. It has very high commercial value, millions of dollars sometimes. So I have invented an emergency sea disaster information system, which proved to be very fast. On some occasions it was faster than the one from the Lloyd's insurance company, a world leader in that field.

I have a very complex monitoring system: I check many sources around the world, I can read sea industry-related news written in all European languages. I also understand Chinese and Japanese.

I am more concerned with analysis than just reporting sea disasters. With my experience, in most cases I can tell what exactly has happened to a ship. I am like Sherlock Holmes, who once said that he could solve most crimes by analogy.

I have dozens of gratitude letters in my archive, lots of them for saving someone's life. But I don't have any feelings about it. I don't see myself as a hero — that was it, and that's all. Your life is now: You have to live on and keep on proving yourself with your deeds instead of recalling the past.

On the other hand I feel anger and helplessness when I fail to attract attention to an incident. Because I need to make a fuss for the people in an emergency situation to be saved. And I do everything to make it happen.

The Sea, The Sea

I like the sea and the process of navigating a ship. I like the merchant navy because it does a great job. The world economy would not exist without it. Even writing about this industry fills me with positive emotions.

My work is like a perpetual feast to me. I am 57 now and am still very passionate about the sea and ships. Sometimes I visit my friends on their ships in the port and stay overnight. I feel completely different there. When I fall asleep I can hear the ship engines working, but the sound does not bother me — I know that it has to be like that. 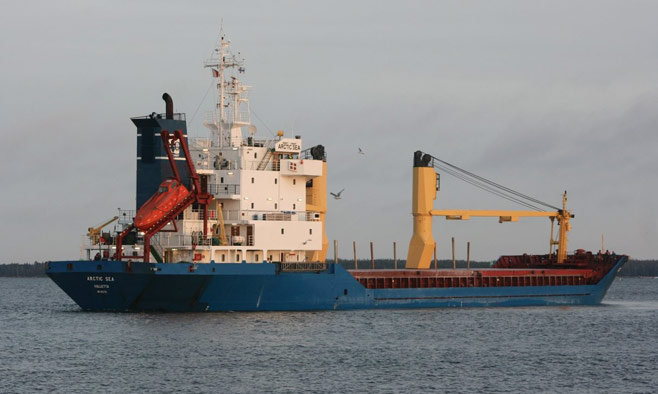 The Arctic Sea cargo ship and its crew of 15 Russian sailors vanished off the Swedish coast on July 28, 2009 while carrying $1.8 million worth of timber from Finland to Algeria. The ship went as far as the coast of west Africa and was freed by the Russian navy with eight suspected hijackers on Aug. 17.

Eleven sailors and the suspected hijackers were sent to Russia, while four other sailors stayed onboard the ship. The ship was towed to the Canary Islands coast.

Russian authorities gave conflicting versions of what happened, prompting speculation that the ship might have carried secret cargo, possibly missiles for Iran. Some media speculated that foreign intelligence could have been involved in the incident.

Eight people — including Russian, Estonian and Latvian citizens — were detained as suspected hijackers. Six of them claimed to be environmentalists abducted by the ship's crew, while two others pleaded guilty. All eight men were sentenced to up to 12 years in prison. On Russia's request in 2013 an international arrest warrant was issued for an Estonian diplomat suspected of organizing the hijacking.