When considering where the ruble may trade against the world's major currencies over the next 12 months, two factors rank well above all others: the price of oil and Central Bank monetary policy. History shows that the trend in the economy is more a byproduct of oil and the consequences of the ruble exchange rate rather than a driver of that trend. In more diversified economies that relationship is the other way around, but Russia is a long way from that.

What happens to sanctions will be the dominant talking point in 2016. But, as we saw in 2014, politics and sanctions are far from being the major driver of the ruble. An easing of financial sector sanctions, which then allows companies and state institutions to borrow at competitive interest rates, is certainly key to the economy pulling out of a low growth environment, but the impact on the ruble will be relatively smaller than the oil price over the next 12 months.

For the oil price, an important factor will be how traders perceive the outcome of the next OPEC oil ministers meeting, which is scheduled for early December in Vienna. It is unrealistic to expect the major producers, especially Saudi Arabia, to agree to a cut in output. Saudi Arabia's oil minister has made clear that the kingdom is focused on protecting its market share and will not cut its output until it sees a reduction in U.S. shale output. The December meeting is more likely to further weaken oil as Iran, intent on raising its export volumes as soon as sanctions come off early next year, is expected to push for a higher share of OPEC output. Saudi and its Gulf Cooperation Council allies will reject that request. 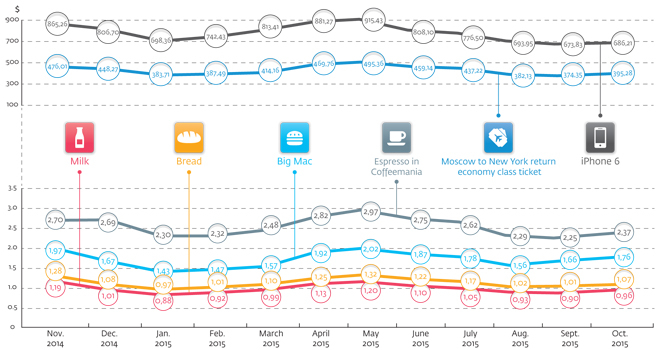 Fluctuations in dollar prices for various goods over the past year.

U.S. Fed policy actions will have an impact on the ruble but only indirectly insofar as the expected rate increase will boost the appeal of the U.S. dollar, and that is always a negative for the oil price. Russia should not suffer any capital outflows, as is expected in many other developing economies, simply because other factors have already almost fully drained the economy of nervous and speculative capital since the 2008 recession. There is hardly much left. Similarly, any slowing of the Chinese economy, which may then result in yuan devaluation, will also only hurt Russia via the oil price impact. There is simply too little non-oil trade and almost no capital flows between the two countries at this stage for Chinese moves to be felt beyond oil.

To what extent the ruble does move with the oil price will depend on Central Bank policy or, more precisely, whether the Central Bank sticks to its newly revised position of non-interference in the ruble market unless the ruble threatens to improve beyond the 55-60 rubles to a U.S. dollar range. Recent clarifications, which are validated with the market movements over the past four months, make clear that the Central Bank will not use one single dollar of its reserves to support the ruble against a falling oil price. Equally, if the ruble threatens to break higher than 60 to the dollar, then it will start to rebuild its Fx reserves to block further strengthening.

So, what does that mean in hard numbers? The price of Brent is more likely to end this year close to $45 per barrel or a little lower. That would mean a year-end ruble-dollar rate close to 70. Through 2016 the price of Brent is expected to average $60 p/bbl, i.e. starting the year weak but ending closer to $65 p/bbl. That implies an average ruble exchange rate not far below 70 to the U.S. dollar with modest strengthening in the second half but hardly much better than the 65 level. A weak ruble is now an entrenched and critical part of the Kremlin's ambition to rebuild long-term economic growth.

Chris Weafer is a senior partner with Macro Advisory, a consultancy advising international companies and investors working in Russia and across the Eurasia region.

Keeping an Eye on the Russian Financial Market

Those promoting good news from Russia are focused on the fact that Russia's equity indices are among the best performing in the world this year.
opinion

Where Is the Ruble Going Next? (Op-Ed)

Should you book your New Year holiday now, or see what happens with the ruble? Columnist Chris Weafer explains.
opinion

Will This Russian Winter Be a Cold One for Investors? (Op-Ed)

For much of the past three years it has generally been right for strategic and portfolio investors in Russia to consider the glass to be half empty...
opinion Sergey Radchenko

It's convenient to blame "the Russians" for failing to stop the war. But what have you done to stop it?