Just published in Britain is Charles Moore's second volume of his three-part authorized biography of Margaret Thatcher subtitled "Everything She Wants." Moore was first asked to do the project in 1997 but only began it in earnest in 2003. To date, he has interviewed 500 people, and by the time he completes volume three — to be titled "Herself Alone" — it will be close to 600 sources. In addition, Moore spent many hours with Thatcher herself prior to her death in 2013.

This meticulously researched biography — it runs to a massive 880 pages — has at its heart Thatcher as the matriarchal ambassador to the Soviet Union for the West between 1982 and 1987. The Moscow Times met up with Charles Moore on the day President Xi Jinping met David Cameron in London to talk about a meeting between a British Prime Minister and a world leader that took place more than 30 years earlier. 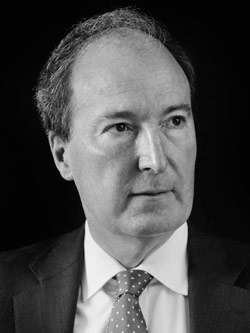 The sobriquet of the "Iron Lady" that was used to describe British Prime Minister Margaret Thatcher actually had Red Army origins in 1976.

"The Red Star — the Red Army newspaper — called her that as a way of mocking her," Moore said. "She grabbed it and thought it a compliment because she was a strong woman. She was able to throw it back in their faces."

Thatcher's first election victory in 1979 was the same year as the Soviet invasion of Afghanistan. When she departed Downing Street in November 1990, it was a month after the reunification of Germany. In the previous 12 months, communism had collapsed across Eastern and Central Europe.

Thatcher abstained from attending Brezhnev's funeral in 1982, but she did attend Andropov's in early 1984. She still saw them as malevolent figures on the international landscape. "She considered Brezhnev, and Andropov to a slightly lesser degree, as very much the enemy."

But, Moore added, "She was looking for change, and that's how the relationship with Gorbachev came about."

It still looked like the sun would never set on the Soviet empire in late 1984 when Politburo member Mikhail Gorbachev met Thatcher at Chequers, several months before he became the Soviet leader. Although the Foreign Office under the late Geoffrey Howe was integral in setting up the initial meeting, another key figure was the MI6 mole Oleg Gordievsky, whom Moore was able to interview.

"He was still working in the Soviet Embassy at the time as a double agent, so he was able to tell his British friends what the Russians were thinking about Thatcher and in general. The following year he defected. The KGB was suspicious of him and he was probably about to be tried and punished in the Soviet Union, but MI6 got him out. He came to see Thatcher after he came out, and he gave her a lot of advice."

Gorbachev's visit with Thatcher at Chequers on Dec. 16, 1984 was, Moore said, important in two ways. "It was extremely abrasive, and on the other hand it was extremely successful. They had this great argument about capitalism verses communism, and they realized that they enjoyed the argument. At one point Gorbachev nearly walked out because he was getting so angry with her."

For Gorbachev the meeting was preparation: "He was looking for some sort of breakthrough in the West."

Thatcher could provide influence with the Americans more than any other Western leader because of her closeness to President Ronald Reagan. Indeed, Thatcher met with the future Soviet leader first. "Reagan and his people were much more cautious," said Moore. "Because Reagan had such a good relationship with Thatcher, he listened carefully to her suggestions and acted on them."

"In the same week that she saw Gorbachev, she ended up seeing Reagan at Camp David. One of her two main reasons for doing so was to tell Reagan about Gorbachev.

"It was an incredible week in her life," Moore recalled. "She went from Chequers to China to Hong Kong to Honolulu to Camp David in six days."

Change in the Air

Gorbachev reciprocated by inviting Thatcher to Moscow in March 1987. Association with Thatcher would benefit him by encouraging the domestic reforms that would be known as perestroika and glasnost.

Even more important was the impact Thatcher had upon the Soviet people. "This was because Gorbachev wanted to allow her to be seen. It was part of his opening up," Moore explained. "Mrs. Thatcher was allowed to meet crowds in the street without restriction."

She visited a housing estate and was interviewed on television. "It was an hourlong interview where she said exactly what she thought about the Soviet Union. People were absolutely amazed by her. Soviet viewers had never ever seen anything like it. And she also made a very glamourous impression, very stylish with her hats, her sable-collared coats, her beige suede boots — it was all very dramatic and very iconic, I'd say. She was seen as a very important figure in the Western world and an ambassador whom the Soviet leadership was permitting in."

This was truly a signal moment. "I was talking to a Russian friend about this only two days ago," Moore said, "and she remembered this when she was a student in Moscow. She said, 'We felt this was the moment, something really was changing now.'"

Thatcher's approach also included championing the plight of dissidents like Andrei Sakharov and Natan Sharansky. "She was concerned with dissidents and what would happen to them. She was very keen to do this and never failed to raise these matters with the Soviet leadership."

Both leaders were more popular in each other's country than their own, although as Moore pointed out, unlike Thatcher, "Gorbachev didn't have to stand for election."

Neither leader would last in power much into the next decade. Thatcher left office in 1990 and Gorbachev in 1991. They continued to meet occasionally. But those meetings would no longer change the world.

"Everything She Wants," Volume 2 of "The Authorized Biography of Margaret Thatcher," by Charles Moore, was published by Allen Lane and released in Britain in early October. It will be released as "Margaret Thatcher: At Her Zenith: In London, Washington and Moscow" in the U.S. in January.