When City Hall introduced paid parking zones in 2012 in downtown districts mainly occupied by offices, Muscovites grumbled and some tried to outsmart the system by hiding parts of their license plates from the cameras of parking monitors.

But last week, when the paid parking zone expanded well outside the Third Ring Road and deep into residential areas, angry drivers were no longer content to grumble and took to the streets for the first time.

"I have never participated in a single street protest, but I came here today because they crossed the line and implemented paid parking on residential streets," said Yulia Shumilina, a 25-year-old resident of the northern Aeroport district who braved the cold on Saturday afternoon to rally with several dozen other locals near the Aeroport metro station.

When paid parking was introduced three years ago, city authorities claimed it would push commuters to use public transportation rather than their own cars, therefore easing the traffic downtown. Even critics of the initiative have admitted that it has had the desired effect in the city center.

But protesters said they didn't understand what goals, other than simply making money, City Hall was pursuing by establishing paid parking zones in residential areas.

"I was completely in favor of paid parking in the city center: It makes sense. I used to work on Lubyansky Proezd. But I don't get why I have to pay for parking my car near my house now. What has changed about the space near my house that it suddenly requires payment?" said Shumilina, rage and frustration audible in her voice. 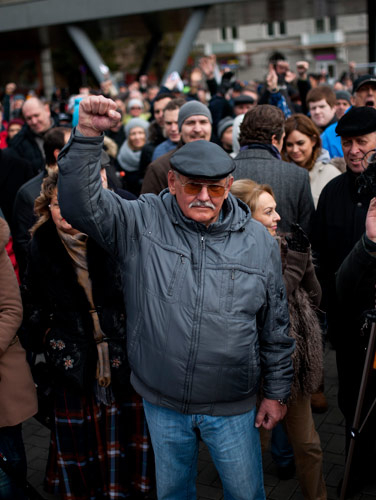 The protesters gathered near an improvised stage on which municipal council deputies, deputies from the Moscow City Duma and even several State Duma lawmakers — mostly from the Communist party — took turns in condemning Moscow Mayor Sergei Sobyanin and Maxim Liksutov, his deputy responsible for transport in Moscow.

It was the second such rally in a week, following one held three days earlier in the northeastern district of Ostankino. Several hundreds of people attended that rally and collected signatures for a petition demanding Liksutov's dismissal. More signatures were collected Saturday — against paid parking, against Liksutov and against Sobyanin's team in general.

"This is completely against [the interests of] Muscovites," said Olga Miloshenko, another resident of the Aeroport district who was also taking part in the rally.

She said that motorists will now start leaving their cars in the courtyards of residential buildings to avoid paying for parking on the streets in her district, making it difficult for local residents to park their cars in their own yards.

"I'm a completely [politically] inactive person, I've never been to a protest in my life," said Miloshenko. "And I was actually glad when they introduced paid parking in the center — it brought things into line there, but this was the last straw."

"During an economic crisis, additional expenses are not exactly anything to be pleased about," the woman added.

City Hall's transportation department claims it consulted with residents and municipal deputies on the matter and has their consent.

"We're actively working with municipal deputies and city residents and are trying to take their concerns, wishes and suggestions into consideration during our decision-making process, even though their opinion has no legal power," said Yelena Yudina, a spokesperson for Administrator of City Parking Space, the municipal enterprise responsible for organizing paid parking zones. 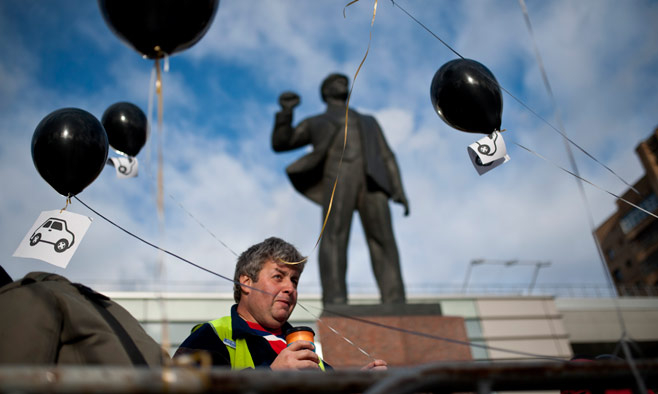 According to Yudina, the new paid parking areas were were set up in locations "most attractive for drivers." Earlier statements by transport department officials specified they would be near shopping malls, railway stations and office buildings.

Yudina did not answer a question about whether the authorities would change their plans because of the protests.

City officials did consult residents and district officials, said Anton Tarasov, a municipal council deputy for the Aeroport district, but then they ignored the opinions gathered when they decided on the parking regulations.

Moreover, in many places, the authorities have installed road signs that prohibit parking completely.

"They want us to come begging for more paid parking spaces instead of no-parking zones," Tarasov said.

The next rally is scheduled for Oct. 17.

"I doubt this will change anything, to be honest," said Miloshenko. "But we have to at least try to do something — we can't just accept it," she added.