Until recently, two policemen sat in a car 24 hours a day, seven days a week by the entrance to an ordinary residential block in the center of Moscow. Through the entrance on Nikitsky Bulvar and up a musty stairwell, another policeman sits and keeps watch outside an apartment door.

Behind the door is said to be a mysterious collection worthy of a queen, or even a president: more than 1,000 paintings, sculptures and other artworks by da Vinci, Michelangelo, Rembrandt and other Renaissance masters — all packed into a three-room apartment.

The collection, worth a reported $2 billion, for now belongs to octogenarian Nina Moleva, but she has bequeathed it to the state — more precisely, to President Vladimir Putin. The police, she says and a state official confirms, are there to protect the collection.

“I have left it to the president,” Moleva told The Moscow Times when reached by phone. “I have nothing else to say.”

One of the policemen on duty outside the apartment building this summer said he had been keeping watch for two years. “We know about the art but I have never seen it,” he said, declining to give his name as he spoke from his car, parked on the side of the road. “We don’t have contact with the owner.”

“There is an apartment full of art, I saw it once. I think it is Dutch,” said Vladimir, the policeman who was keeping watch outside Moleva’s flat on the fifth floor and who also refused to give his last name.

Last week, the police car had disappeared from Nikitsky Bulvar, but another policeman at the scene confirmed that officers were still inside watching her door.

Moleva has previously given Russian state channel Kultura a tour round the apartment, pointing out the treasures on show.

“That is Rembrandt,” said Moleva, pointing to a painting in an interview in 2013. “That one — when Italian specialists came they were literally in hysterics — that is [by] a young Michelangelo. We have another Michelangelo there.”

The tale of this art collection, as told by Moleva and her late husband Ely Belyutin, a well-known avant-garde artist who died in 2012, is one of secrecy, miracles and a lot of questions.

Moleva and Belyutin have said in interviews over the years that the collection was started by Belyutin’s grandfather, Ivan Grinyov, a stage artist at imperial theaters in Moscow, who had a passion for European art.

“Grinyov was paid well at the theater,” Moleva said in an interview with Moskovsky Komsomolets newspaper earlier this year. “He wanted to become a patron of the arts like Pavel Tretyakov [the 19th-century art collector and founder of the Tretyakov Gallery]… so he bought paintings at European auctions.”

The story goes that Grinyov housed his collection in his 12-room apartment in Moscow in the building where Moleva now lives. After the revolution, he hid his treasure trove of art in a fake attic in one of the high ceilinged rooms, as he knew that the Bolsheviks would seize it as they did with many famous art collections at that time.

They didn’t find the art but they did throw Grinyov out of the apartment, turning it into a kommunalka — a communal apartment that housed dozens of people.

During the next four decades, the artworks — rolled up and stored in cylinders — remained untouched, until 1968 when Belyutin and Moleva won the right to move back into three of the rooms in the original apartment.

The couple moved in, Moleva told Moskovsky Komsomolets, and when they opened up the attic, the art — the Rubens, Velazquez, van Dyck — was still there waiting for them.

After the breakup of the Soviet Union, the couple had the work valued by Hotel Drouot, a Paris-based auction house which put a starting price of $400 million and an estimated real value of $2 billion.

That, at least, is Moleva’s version of the story, told numerous times over the years. But upon closer inspection, a more complex and curious tale emerges.

Too Good to Be True

Some local media who have spoken to Moleva and been given a tour of her apartment have printed her story without questioning it, but journalist Alla Shevelkina visited Moleva and Belyutin twice and dug deeper than others in a report for French newspaper L’Express in 2007.

She doesn’t believe them.

“Each time there is a different story and a different version of where the collection was hidden,” Shevelkina told The Moscow Times in e-mailed comments.

Moleva’s art-loving ancestor Grinyov cannot be verified, Shevelkina said. She could not find him in the registers of Moscow property owners. She did find two Grinyovs in imperial theater archives, but both were dancers and both female.

“Ivan Grinyov … is an invention,” she said. “A painter/stage artist did not earn enough to buy art. His name cannot be found anywhere, and at that time, all collectors were known, the Tretyakov brothers, [Sergei] Shchukin, [Ivan] Morozov etc. — they didn’t need to hide.”

In the Moscow art community, there is also a lot of skepticism about the art and Moleva’s story.

“The collection has become a bit of a myth,” said Valentin Dyakonov, a curator and art critic at the Kommersant newspaper. “It would have been difficult to find such items, and nobody knows where the art came from,” he added.

“No one has been to value the collection. There has been no expert evaluation,” said Milena Orlova, editor of The Art Newspaper Russia. “We only have her [Moleva’s] word, so it is unclear what is there.”

Initially, Moleva tried to donate the collection to a Moscow museum, she told local media, saying that a number of works had been given away.

The Pushkin Museum of Fine Arts refused to accept the collection.

“I am very sure in my ideas about [the collection], the big names like Leonardo [da Vinci] and El Greco are not there, … they, and even other paintings in the collection, are copies,” said Viktoria Markova, an expert in Italian paintings at the Pushkin Museum who has not seen the collection but saw a catalogue of the art that was put together in 1992 by an Italian publisher. 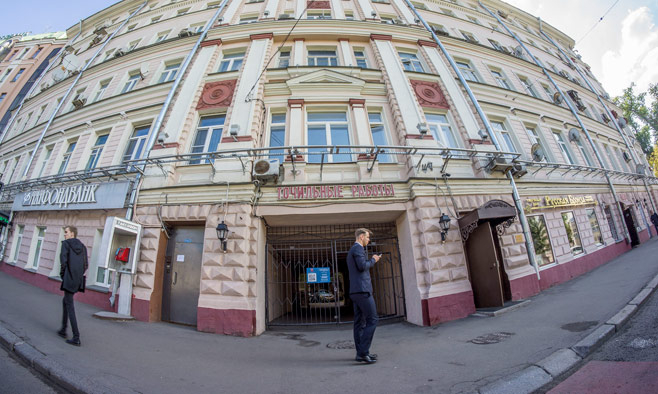 From the outside of the apartment building, there is no indication of the possible treasure trove stored within.

The skeptics have a number of theories about the collection, saying it does contain interesting art but that there is no secret attic or 19th-century collector.

“The collection was never hidden, it has existed since the late ’40s or early ’50s,” said Shevelkina.

Parisian painting expert Eric Turquin visited the collection with a professional from the Drouot auction house in the early 1990s, but he told French newspaper L’Express that he did not estimate the collection at $400 million, and that he had not heard of the dramatic saga of Grinyov and the secret attic.

Turquin confirmed to The Moscow Times that he had seen the paintings and that “there were some far-fetched attributions made, but it was an altogether remarkable body of religious paintings from the 16th and 17th centuries, put together by this cultivated amateur collector during the Stalin era. I won’t say any more than that.”

The key to the collection is Belyutin, a prominent painter whose work was among those that drew the wrath of Soviet leader Nikita Khrushchev in 1962 at Moscow’s Manezh Exhibition Hall.

The exhibit, called “New Reality,” was supposed to show off the new art that had appeared under the thaw — a loosening of the Soviet system after Stalin’s death in 1953 — but an enraged Khrushchev slammed the artists, who included Belyutin and his students, as “fags” and their work as “filth,” saying “Can you not draw? My grandson can draw better than this.”

Belyutin and the other nonconformist artists’ work were thrown out of the exhibit.

Belyutin reportedly went into hiding after the Manezh scandal, but his disgrace was not complete and for a Soviet artist, he did surprisingly well.

Oskar Rabin, one of the pioneers of Soviet nonconformism, remembers visiting Belyutin’s flat in the 1960s.

“He said there was a Leonardo da Vinci, but I don’t know if it was real. It’s hard to say,” Rabin told The Moscow Times in a phone interview from Paris where he now lives.

“Compared to us, he was rich because he had this collection. You have to be rich to get an expensive collection like that. He had a lot of expensive furniture too, and a big dacha where he would receive important visitors.”

The relative luxury by Soviet standards of Belyutin and Moleva’s lifestyle led to a number of rumors. L’Express wrote in its story that they were rumored to be art collectors and dealers for Soviet leaders as well as close friends with Yury Andropov, head of the KGB in the 1970s and later the Soviet leader.

In the interview with Kultura, Moleva points to a chair and boasts about how Fidel Castro once sat there.

Another theory for the mysterious collection’s origins is that Belyutin, who is rumored to have worked as a Soviet military intelligence officer, acquired the art during World War II when a lot of trophy art was brought back from defeated Germany.

“His collection could have a direct link to his work as an intelligence officer,” Dyakonov said, “They could be stolen. We have many such items in Russia. The Pushkin Museum and the Hermitage, for example, have paintings in their holdings that were taken from Germany.”

Shevelkina, who also thinks it possible that the paintings are from Germany, suggested that Moleva and Belyutin thought up the romantic back story as a more interesting alternative.

The family had long planned to leave the collection to the state, but Moleva told Moskovsky Komsomolets that her lawyer told her that she needed to name an individual person — so she wrote down Putin’s name.

Vladimir Tolstoi, a cultural adviser to the president, confirmed in a phone interview earlier this month that Moleva had bequeathed her collection to the state and that as, “thank God, she is alive and well,” it remained with her in the apartment. The state provided the police guard, he said.

Many may doubt whether the bequeathed art really does include the treasures that Moleva says, but there are others convinced of its authenticity.

“I only know what I have seen on the TV,” said a woman who works in a bookstore next door to Moleva’s building and who refused to give her name. “Of course it is real — if it wasn’t real, the government would not send police to patrol outside the building at all hours.”