The Kremlin has released pictures of President Vladimir Putin working out at the gym with Prime Minister Dmitry Medvedev, images apparently aimed at shoring up Putin's rugged, masculine image as his popularity dips.

Wearing a white T-shirt, track suit trousers and running shoes, Putin is shown on muscle-building apparatus in a publicity stunt that recalled previous shots of him shirtless riding a horse, flying a supersonic jet and hunting a tiger. 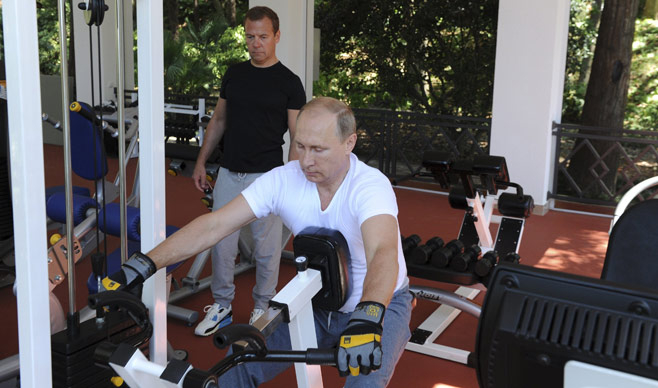 Putin's approval ranking has been dented by a sluggish economy and free-falling ruble whose value has halved since last year due to a decline in the oil price and Western sanction over Moscow's role in the Ukraine crisis.

After their workout, at Putin's Black Sea's residence of Bocharov Ruchei, near Sochi, the two politicians were shown on television grilling meat and having tea, adding to the healthy and wholesome picture. 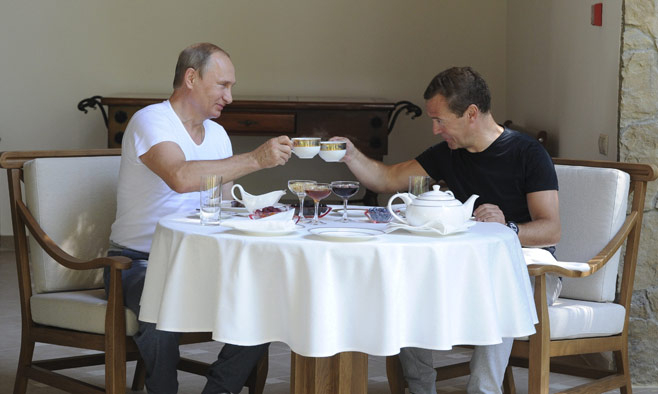 Putin's rating remains very high by Western standards. A poll, published on Friday in business daily Vedomosti by the Public Opinion Foundation, showed 72 percent of Russians would have voted for Putin in August, down from 76 percent in May.

According to polling organization the Levada Center, Putin's approval rating was 61 percent in November 2013, the lowest since 2000 when he was first elected President, but it surged above 80 percent early last year as Russians rallied around his actions over Ukraine.