Opioid replacement therapy (ORT), which helps heroin addicts get clean by taking a dose of methadone or another less potent opium-based drug, was legal in Crimea for eight years, but the practice ended when the peninsula was annexed by Russia in March 2014. Former addicts from the region say that ORT was instrumental in getting their lives back on track and they fear for friends still struggling with addiction.

“If I hadn’t switched to the opioid therapy in 2008, I wouldn't be alive now,” said Igor, a resident of Crimea who declined to give his last name. “The legal way to get substances gave me a feeling that my life and the lives of my relatives were safe.”

Igor's ORT included not only a legal dose of a drug every morning, but also consultations with numerous doctors and regular blood tests to check for diseases common among users, such as HIV and tuberculosis.

“I saw many former heroin addicts on therapy fall in love, get married, get jobs and give birth to healthy children,” Igor said.

Igor, who is part of an organization called the Eurasian Network of People Who Use Drugs that works to decriminalize drug use and get proper health care for users, said he “lives on the road,” going back and forth to Ukraine, where ORT remains available.

“Nobody cares about those 805 people who were on ORT in Crimea anymore,” Igor said, adding that some of them have already died from overdose or suicide.

Michel Kazatchkine, United Nations Special Envoy for HIV/AIDS in Eastern Europe and Central Asia, said “between 80-100” drug addicts had died from overdose and suicides since the ban of ORT in Crimea during a telephone press conference earlier this year.

“For people it was a transition from social, psychological and physical stability back to street drugs and stress,” Kazatchkine was quoted by BBC.com as saying.

Three Russian citizens have recently filed complaints with the European Court of Human Rights arguing that by banning opioid replacement therapy, Russian authorities are violating the European Convention on Human Rights, which forbids any discrimination and guarantees protection from cruelty and the right to privacy, Russian daily Kommersant reported.

There are a number of Russian experts who support the Ministry of Justice’s position to stop the treatment, however.

Speaking about the Crimean case in particular during a conference there last year, Viktor Ivanov, head of Russia’s Federal Drug Control Service, said: “200 methadone ‘clients’ have died in Crimea over the last three years. As a result of the replacement therapy, the mortality rate among addicts is twice as high there as in Russia.”

Nikita Lushnikov, chairman of the National Anti Drug Union, which includes over 100 rehabilitation centers approved by the Russian state, says that ORT won't work in Russia.

He told The Moscow Times that he saw local drug addicts in Ukraine get a legal dose of methadone in the morning and later purchase more drugs on the streets at night.

“Replacement therapy won't work here because of the Russian mentality,” Lushnikov said. “For our young drug users, it's never enough. Getting methadone for free, people remain the same — drug addicts and outcasts of society.”

Lushnikov said he himself had been a drug addict for 10 years before he joined a drug-free program in 2005. Today his mission is to help others become drug-free.

Q&A with Maxim Malyshev, coordinator of the Andrei Rylkov Foundation for Health and Social Justice

Maxim Malyshev has been providing support for drug addicts on the streets of Moscow for 10 years. He is a supporter of opioid replacement therapy and questions statistics trumpeting the success of drug-free programs. 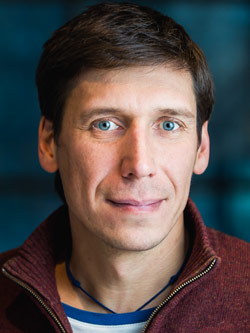 What is the main work of the Rylkov Foundation?

We are volunteers, and our goal is to minimize damage from drug use and prevent the spreading of HIV and hepatitis among drug addicts. Five days a week, at night, my team of around 16 people and I visit locations in Moscow where drug users gather. We often find them near pharmacies. For example, for the last two years, the eye drops Tropicamide have been popular for intensifying the effect of heroin.

On the street, we give drug consumers new needles, condoms and explain how to prevent HIV. We also hand them Naloxone, a legal medication to counter overdose. For the last six months, we have saved 67 lives thanks to Naloxone.

Do you agree with the head of the Federal Drug Control Service Viktor Ivanov that as a result of replacement therapy, the mortality rate among addicts in Crimea is twice as high as in the rest of Russia?

I would recommend those officials to go to the streets and work personally with drug addicts before making such statements. Drug addiction is first of all a social, not a chemical disease. Ninety percent of the people we work with had a terrible childhood and it damaged their psyche forever. They were not loved as children, they cannot express their emotions. Drug addiction, unfortunately, in the majority of cases, is chronic and cannot be cured. From what I know, no more that 20 percent of people remain drug-free after competing a drug-free rehab.

ORT saves their lives, helps to decriminalize them. Addicts don't have to steal anymore and don't support drug cartels. They socialize, and are available for HIV treatment and blood tests. Like in Germany, Holland, Czech Republic and many other Western countries, they get a dose in the morning and go to work.

Some taxpayers don't want to sponsor a legal form of drug addiction.

There is no patent for methadone and every country can produce it, which makes it cheaper than when the state wastes money on the complicated system of Russian judiciary processes. Russian prisons are overcrowded with those convicted for drug use. Often they are behind bars on false charges.

To get one person in jail, it takes a whole army of detectives, a long investigation, salary for guards. Some addicts have HIV or tuberculosis, so the state pays not only for the person to stay in prison, but also for medical care. As we all know, prison doesn't make them better citizens, and after being released, they go back to selling or taking drugs. It's a vicious circle. 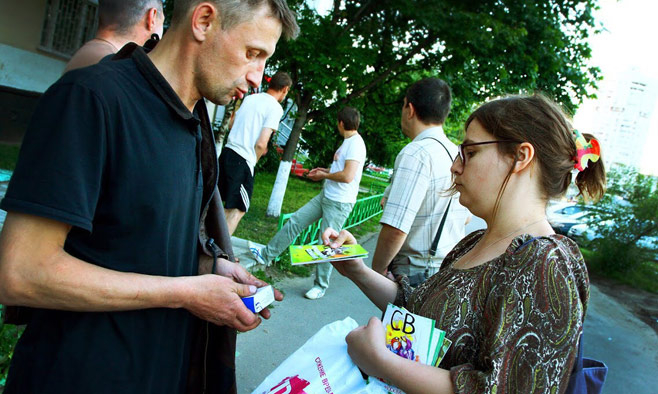 Andrei Rylkov Foundation for Health and Social Justice at work.

What do you think could be a real help for drug addicts besides opioid replacement therapy?

Besides ORT, our government should improve the work of state organizations — specifically, medical centers and hospitals should care more about drug addicts. We are now concerned about Igor from Lugansk, who has severe trophic ulcers. He has no Russian citizenship, thus according to new rules, he is allowed to stay in a state hospital no longer that 3 days. When we brought him to one of the surgeons, they refused to take care of him, saying: “What were you thinking? You're a drug addict and it's your fault.” We found Igor a doctor and gave him medicine and salves. But I feel it won't help, as he clearly needs hospitalization.

Where do you get money for the medicine you distribute?

Our fund exists thanks to donations — on our website you can donate money. We also get grants from Western companies such as the Levi Strauss Foundation. The Soros foundation gave us money, but since the foundation recently was included in the list of NGOs whose work according to Russian government poses a threat to national security, we had to give the money back. This year we had a few months without any financial support. So when we went to the streets, we had to save bandages, needles, salves ... So far fewer people got help. What we do is just a drop in the ocean and Moscow needs much, much more of this kind of volunteer help.

For three years in a row we have taken part in a competition to get a presidential grant for organizations that help fight drug addiction, but haven't got anything yet. At the same time we see how, for example, the Federal Drug Control Service of Russia last year asked for 10 billion rubles ($153 million) from the Russian budget for yet another drug rehabilitation and socialization program. It's not going to help everyone and people should have a choice. Instead of doing the Sisyphean task of making many drug addicts drug-free, we should decriminalize them.

In Moscow's Bibirevo, Heroin and Crime Go Hand in Hand