Reports this week about a movie theater and hair salon opening for homeless people in Moscow raised eyebrows, with some quick to say that the priority should be to provide shelter for the city's legions of homeless.

But local charities and city officials say helping homeless people is not just about providing food, shelter and medical care.

"For most people there's nothing special about going to a movie or a hairdresser. But for those who have spent a year on the streets it helps them to remember that they're human, that there is much more in this world than just alcohol or drugs," Andrei Besshtanko, deputy head of City Hall's department of social security, told The Moscow Times on Wednesday.

There are tens of thousands of homeless people in Moscow, and the number grows every year, said Besshtanko.

That figure, however, only takes into account those who use the services of Moscow's center for social rehabilitation — the main municipal facility in Lyublino in southeastern Moscow where homeless people can spend the night and get various kinds of assistance — and its nine branches around the city, he said.

For those tens of thousands of homeless people, the 10 municipal shelters offer a total of 1,500 beds.

The shelters provide the homeless with a place to sleep, food, first aid, assistance with obtaining ID and return transport for those who came to Moscow from other regions.

But not everyone without a roof over their head can rely on a bed at the shelters. People who turn up with a rash or fever will be turned away, along with those who have been diagnosed with contagious diseases such as tuberculosis, venereal diseases, skin and hair infections. During the summer, the facilities also turn away people who are under the influence of drugs or alcohol.

Nourishment for the Soul

Now the city's homeless charities are branching out from the basic goal of preventing homeless people from starving or freezing to death.

A movie theater for the homeless had its inaugural screening over the weekend in a tent near Yaroslavsky Station that usually functions as an aid post for homeless people.

The popular 1965 Soviet comedy "Operation Y and Shurik's Other Adventures" attracted dozens of people. Before the show, all the spectators were given a hot meal, tea and fresh watermelon for dessert.

Photographs of the event published by the Komsomolskaya Pravda newspaper on Monday showed men and women of all ages laughing heartily as they watched the slapstick classic.

"We do our best to treat the homeless as friends, not as objects to be fed and washed," Natalya Markova, project coordinator of the charity Druzya na Ulitse (Friends on the Street) that helped set up the event, told The Moscow Times on Tuesday. "Their lives are hard enough as they are, and with projects like this we try to cheer them up," she said.

Organizing movie screenings, improvised beauty salons and Saturday football matches doesn't mean that charities don't consider giving the homeless food or a place to sleep less important, Markova said. "It's just that they need to identify as regular people, not as outcasts," she said.

Druzya na Ulitse, which consists exclusively of volunteers, has been holding events like this since 2007, Markova told The Moscow Times. The movie screening was organized together with Sotsialny Patrul (Social Patrol), a service provided by City Hall in which minibuses drive around the city and offer assistance to the homeless right there on the streets, such as allowing them to warm up in the bus, providing medical care and taking those who want to go to the municipal shelters.

An improvised hair salon set up in the same army tent near Yaroslavsky Station right before the movie theater premiere was a resounding success and inspired the volunteers to go ahead with the movie theater idea, said Markova. The screening went down well too, and Soviet movies will be shown there once a month from now on, she said.

"I didn't know about it, but if there's another show, I'll definitely go. It would be great to watch a good old Soviet movie," Alexander, a homeless middle-aged man who declined to give his last name, told The Moscow Times on Tuesday. 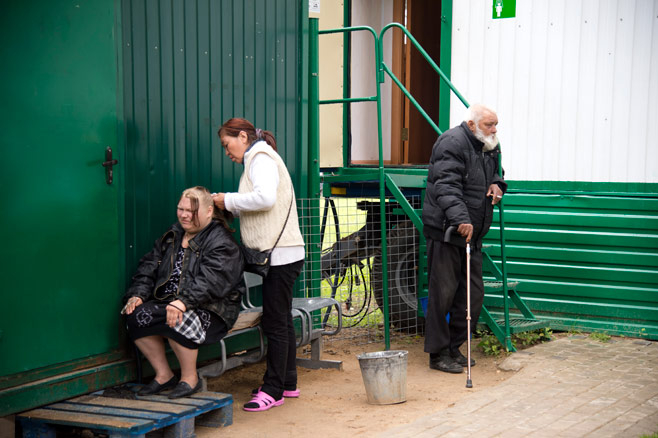 A homeless woman getting her hair done within the Angar Spaseniya facility in central Moscow on Tuesday.

Hot Food and a Haircut

Alexander was waiting for another army tent for the homeless known as Angar Spaseniya (Rescue Hangar) to open on Nikoloyamskaya Ulitsa in central Moscow.

The facility, run by Miloserdiye (Mercy), an Orthodox Church service that supports people in need, offers homeless people a place to eat, take a shower, get clean clothes and free medical care and rest in a warm tent for a few hours.

Now Miloserdiye plans to open a hair salon for the city's homeless population.

Angar Spaseniya already provides some barbershop and hairstyling services: Several volunteers with the requisite skills service an average of 10 clients a day free of charge.

But the facilities are basic. The tent lacks specialized equipment, such as mirrors, haircutting scissors, apparatus to sterilize the instruments and specialized chairs. To buy these, Miloserdiye plans to fundraise some 80,000 rubles ($1,500) and launch the service within a month.

Angar Spaseniya is one of the rare places in Moscow homeless people can come to and get the assistance they need regardless of whether they have any ID or not, where they're originally from and how sober they are. Under Russian bureaucracy, people without any ID or proof that they are registered at a Moscow address have difficulty in getting access to even the most basic services.

"We accept everyone and help those who don't have any ID to obtain them," Miloserdiye spokeswoman Yulia Lapteva told The Moscow Times on Tuesday during a tour of the facility.

"When a homeless person comes to us for the first time, we talk to him or her, take down their information and then investigate in order to find relatives they could stay with. Those who have a home outside of Moscow we help to get there," she said.

"We come here often to grab something to eat, take a shower, get some clean clothes and recharge our cellphones. It's great a place like this exists in Moscow, there are very few of them," said Alexander, the man who was waiting for the facility to open.

His younger friend, an ex-convict who also identified himself only as Alexander, agreed. "People here are very helpful. They're helping me to get new documents now," he added.

Both of them said they didn't really like the municipal center in Lyublino, even though they can stay overnight there. "They keep the pillows and the mattresses wrapped in cellophane and don't clean up after others, so you have to sleep on the dirty cellophane," the older Alexander told The Moscow Times.

At noon on Tuesday the tent was full. People were sitting on plastic chairs waiting for a hot meal — most of them sleeping, some reading newspapers and some sharing stories about their struggles on the streets.

Dmitry Belykh, a volunteer working at the facility, said Angar Spaseniya can accommodate up to 50-70 people. "Most of the homeless people come at about 10:30 in the morning, half an hour after we open, and stay till 4 p.m., when we start cleaning everything up," he said.

"There are three stages of serious trauma a homeless person undergoes," said Belykh. "The first is when they get into a situation that results in them having no place to live, the second one is when they realize they have hit rock bottom and are homeless, and the third is when they try to get back to normal," Belykh explained.

Projects like the movie theater and hair salon help them work through these stages of trauma, he said.

"Can you imagine what it's like to realize that you're basically a bum?" Markova of Druzya na Ulitse added. "Most of them are ashamed of themselves, and the infrastructure in Moscow they can use only adds insult to injury. For example, there are very few places where the homeless can simply take a shower. They can undergo 'sanitization' [at specialized centers where they are washed with chemicals] but that's a totally humiliating procedure," she said.

City official Besshtanko said summer is the hardest time to encourage the homeless to seek help, and that most facilities are mainly used in the winter.

"Those who have spent a year living on the streets usually feel at home under the trees during the summertime, and it's harder for us to help them — they lack motivation," the official said, adding that a year of being homeless is usually a point of no return for most people, after which they are likely to give up and resign themselves to a life on the streets.

One of the most important things City Hall can do for the homeless, Besshtanko said, is to get them a job.

"Last year we started organizing specialized job fairs for the homeless. At first there were one or two employers interested, but there's been significant progress since then," he said. "For example, around 30 employees of the center in Lyublino are former homeless people," he added.

Authorities also work closely with the charitable organizations on the obvious issue: food for the homeless.

"This year, in collaboration with the non-commercial organizations, we set up a facility near the three main railway stations in the Krasnoselsky district where homeless people can get a meal," Besshtanko told The Moscow Times. "It has all the necessary equipment and is located in a place where many of the city's homeless gather," he added.

Both charities and officials admit there's still much to be done for the city's homeless people.

"Homeless people are not the most popular category people like to help, unlike children or animals. Nevertheless, more and more people respond to our pledges, and it amazes me," said Markova.