When a pair of teenage Belarussian models set off on foot for the daunting 700-kilometer journey from Minsk to Moscow, they wanted to do something bold — to go on an epic adventure they could one day tell their grandchildren about. There was no way they could have anticipated what lay ahead: a drowning scare, pilfering strawberries from village garden plots or fleeing to escape a lascivious truck driver clad only in his underpants.

From the warmth and comfort of a cafe in the Russian capital on Friday, the two unlikely teen celebrities recounted these and other tales from their grueling journey in an interview with The Moscow Times.

Soon after graduating from high school, Liza Lizuro and Gloria Prudnikova signed contracts with a modeling agency, the name of which they preferred not to drag into the unexpected spotlight they found themselves immersed in after completing their journey.

Having left school behind, and with prospects of modeling work in Asia and Europe in their immediate future, they decided on a whim to go on a memorable adventure.

The very next day, the 17-year-old brunettes set off on foot for the Russian capital, armed with only the most basic essentials.

"We bought a tent, two sleeping bags, a flashlight, a map, some energy bars and water and took off," said Liza, the quieter and more reserved of the duo. "We had some extra clothes in our backpacks, thinking it might get cold out there, portable cell phone chargers and a few cans of insect repellent."

Gloria — Liza's bubbly, effervescent counterpart — chimed in. "We didn't even have a hairbrush with us! By the end of our journey, our hair had turned into a couple of giant filthy dreadlocks," she said, laughing.

They made a few rules for themselves at the outset, Liza said: "We could only walk during the daytime and had a rule to put up our tent no later than 10 p.m. every day."

At the start of their trip, both girls were brimming with enthusiasm. On their first day, they walked upward of 60 kilometers, Liza said. "That night we were really excited: It all seemed so cool and adventurous," she said.

But what started as a thrill turned out to be the first of many sleepless nights. Once the reality set in that they were lying in a tent in the middle of a field some 70 kilometers from Minsk, as the cacophony of odd noises echoed louder around them, their nerves got the best of them.

The next day, fatigue stifled the girls' optimism. "On the second day of our journey we realized it would be much, much harder and would take much, much longer than we had anticipated," Liza said.

"That day thoughts of dropping the crazy idea and going home started to creep in. Honestly, I don't know what made us go on," Gloria added.

They thought it would take them a week to get from Minsk to Moscow. In the end, it took 24 days.

During the course of the journey, which the teens meticulously documented via social media, they came to embrace the hashtag #700kilometersofhell. Looking back on the brutal 3 1/2 weeks, the girls remain adamant that if anything, hell was an understatement.

With no money and inadequate supplies, the young travelers had to be resourceful to ensure they had enough to eat. They would ask strangers at gas stations to buy them snacks. But often times, people didn't believe their tale and responded with rudeness.

"There was a lot of name calling, but we got used to it at some point and didn't let it get to us," Gloria said.

"Most of the time we ate bread, pastries and chocolate bars, since we didn't have much choice at these gas stations. I hate chocolate bars now. We ate so many of them. But they were a good source of calories and energy," Liza told The Moscow Times.

Gas stations were few and far between in Belarus, the teens said, so there were days when they didn't eat at all.

"It was tough: we walked, realizing how desperately far we are from our destination, our heads were dizzy, legs hurt, and even talking seemed to be too much of an effort," Gloria said.

On these difficult days, the girls stopped frequently to rest, Liza explained, but often it was tough to find a good place to set up their tent. "Once we almost drowned in a bog," she said. "I got stuck in it up to my thighs. Thank God Gloria was able to help me climb out of it."

The hunger and the near-drowning experience were hardly the only hurdles they would have to surmount.

There was no shortage of truck drivers interested in fishing for a connection with the two teenage models. "Some stopped and insisted on giving us a lift. We had to lie and tell them we were going to see our grandmother who lived in the nearest village," Gloria said.

"Most of them were not dangerous, but one was really creepy. He was all smiles as he got out of his truck — but then we saw he was wearing nothing but his underwear. I don't know where we found the energy, but we sprinted away as fast as we could," she told The Moscow Times.

And not all struggles were external. "We were tired and irritated all the time. We fought a lot, yelling at each other that we were done," she explained. "Each of us threatened at different points to give up and go home."

"But in the end we always got over it and realized we only had each other and that we needed to keep going," Gloria added. "It was a tough challenge for our friendship, but we survived," she said.

Babushka to the Rescue

As they passed through small villages, the girls often swiped fruit and vegetables from garden plots, leading to several run-ins with angry villagers and their even angrier dogs.

On one such occasion, an elderly lady in Smolensk tore out of her dacha. "She called us thieves and threw us out of her garden. We were about to leave, but decided to take a chance and ask from some food," Liza told The Moscow Times.

The girls told the babushka their story, showing her pictures and videos, and ultimately won her sympathy. "She insisted we stay with her. We spent two days at her place, eating, sleeping and bathing. She washed our clothes and gave us some food to bring with us," Liza said.

"After that we were rested and ready to continue our journey," Gloria said. "But at the same time it was incredibly hard to leave the warm house with food, beds and hot water and get on the road again." 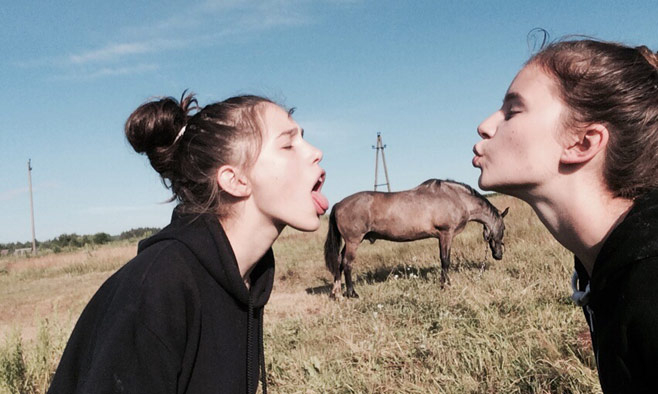 The Russian part of their adventure turned out to be far more pleasant than they had expected. "In our imagination, Belarus was bright and clear like daytime, and Russia was obscure and scary, like a dark night. But the opposite turned out to be true," the girls told The Moscow Times.

More gas stations and more friendly people — that's what the travelers discovered in Russia. "The only problem was that we couldn't use cell phones to access the Internet anymore, because we were now in the roaming zone and it was too expensive. So we could only use our maps," Liza said.

A Moscow-based friend met the girls some 20 kilometers from Moscow and drove them to her home to wash up and rest. "You can't imagine what we looked like — dirty, exhausted, savaged by insects," Gloria said.

"We were so tired and weak that we kept asking ourselves: this is it? This is what we've been struggling for?" she added.

Once in Moscow, the girls discovered that their social media footage of the trip had picked up an unexpected Russian fan base. "People brought food and gifts for us. Some guys even told us they would be happy to pay for our hostel in Moscow," the girls said.

But with the fans can an unexpected media firestorm.

"It's crazy. We're swamped with calls and messages from reporters, and most of the time I can't even tell what's what and who's who," Gloria said.

Liza agreed with a sigh. "Can you imagine, just a few hours ago we were sleeping in our hostel, when a crew from a TV channel knocked on our door," she said.

"They woke us up, shoved microphones in our faces and asked if we were drinking a lot in Moscow and club-hopping," Gloria added.

Neither of the girls seemed particularly excited about the spotlight.

"They [the media] make us look stupid. Everyone wrote that we were teenage models that did God knows what on our way to Moscow, that we didn't want to study at university and we're shallow and silly," Liza said.

This, they said, was untrue. "We will, for sure, go to university. But not this year — we need to take a pause to think about what we want to do in life," Liza said.

"But it's not like that, and we did what we did not because we were seeking fame. We just wanted to have something fantastic to brag to our grandchildren about," she added.

By now, they've been in the Russian capital for just over a week, where they say they've primarily busied themselves exploring the city — not binge drinking. "That's what we tried to tell these TV people — we like spending times exploring parks, not clubs," Liza said.

They said they plan to leave within the next few days with a friend who will drive them to Minsk.

Looking back on the journey, they said that perhaps the hardest part was lying to their parents. The girls initially told their families that they would fly to Moscow.

"It was the hardest thing — lying to our parents. I'm afraid our trusting relationship with them has been ruined," Liza said with a sad smile. "But we didn't tell them about our plans because we didn't want them to worry about us," she added.

The girls' parents hadn't suspected anything until they received an anonymous call from a concerned stranger who had likely caught wind of the adventure thanks to their diligent social media updates.

"This woman called and told my mother we were in danger traveling on foot and threatened to call the police," Liza said. "My mother called me and demanded proof that we were in Moscow. She wanted a screenshot of our geo-location. We had to ask a Moscow-based friend to send us a screenshot of one that we could then forward to my mom," she explained.

Once they finally arrived in Moscow, the girls called and told their parents the truth. "My mother cried when I told her, saying she couldn't trust me anymore. It was difficult," Liza said.

"I think we will get what's coming to us once we get home," Gloria added.

The girls learned a great deal about the importance of planning, how to survive in the wilderness and how to keep a friendship afloat despite incredible obstacles. But the end, neither is particularly interested in another epic journey on foot. "I'm sure we will pull a lot of crazy stunts, but nothing like this. Not in a million years," Liza laughed.

The Russian Orthodox Patriarch Kirill, a strong supporter of President Vladimir Putin, worked for Soviet intelligence while living in Switzerland in the...
hundreds killed

Russian President Vladimir Putin expressed “the most sincere condolences” to his Turkish and Syrian counterparts after a 7.8-magnitude...
punished in absentia

Russian lawmakers will consider confiscating the property of citizens abroad who speak out against Russia’s war in Ukraine and donate to the Ukrainian...
face of the war effort

Ukraine's Defense Minister Oleksiy Reznikov will be replaced by the chief of the military intelligence ahead of an expected Russian offensive and...