GURZUF, Crimea — Once the dream destination of children from across the Soviet Union, the massive children's camp Artek in Crimea is one of the Kremlin's most prized projects in the region.

With the camp's motto "Artekovite forever" fresh in their memories, generations of Russians applauded the camp's return "home" after Russia annexed Crimea from Ukraine in March last year.

But as several of the Kremlin's top officials flew in from Moscow last month to celebrate Artek's 90th anniversary, seven kilometers away the residents of the small seaside town of Gurzuf were gearing up to take their complaints to court.

As Artek launches into an ambitious development plan backed by 22 billion rubles ($390 million) in investment from the Russian state, residents of Gurzuf claim that the camp was illegally granted 10 hectares of the town's cherished seaside property in the wake of the annexation last year.

In a campaign to reclaim this land, a grassroots protest movement of a kind rarely seen in Russia has now declared war on Artek, even calling on Russian President Vladimir Putin for help.

"We ask our president: send [the director of Artek] to Siberia, to the taiga. He can then set up the biggest camp in the world," Yury Skorik, unofficial leader of the protests and a resident of Gurzuf, joked bitterly in a speech at a protest rally in May.

When the new Crimean authorities handed Artek over to the Russian state, 218 hectares of land were transferred, including seven kilometers of uninterrupted coastline along the Black Sea.

It is an area larger than Monaco, camp director Alexei Kasprzhak wrote recently in a special edition of the Russian history magazine Diletant entirely devoted to Artek.

But according to Gurzuf residents, only 208 hectares ever belonged to the camp. The other 10 hectares, they say, were illegally signed away after the annexation.

For the locals, these 10 hectares have a name and central place in their lives. Known as Gurovskiye Kamni, this is the land that slopes down from Gurzuf's central road to a 100-meter pebble beach that has been a favorite among locals for decades.

A five minute walk from the center of Gurzuf, it is also one of only two remaining public beaches in the area.

According to the town's residents, Artek previously leased Gurovskiye Kamni under an agreement with the local authorities. Flanked by Artek's camps on either side, the area itself was never built on, and under Ukrainian rule, locals and visitors came and went as they pleased.

But since the annexation by Russia in March last year, guards employed by Artek — often armed — have started patrolling the camp's borders and barring access to anyone without a special permit, citing security concerns.

"It's about time [the residents of Gurzuf] get used to the idea that in a place where children are vacationing, it is inappropriate to walk your dog, drink beer under every shrub and build campfires," Artek director Kasprzhak told the newspaper Moskovsky Komsomolets in April.

For local residents, Artek's prohibitive definition of "security" leaves them with no room to breathe.

"You need permission to enter here, enter there. All our children have left is a road. They'll be left with nothing else," protest leader Skorik told The Moscow Times. 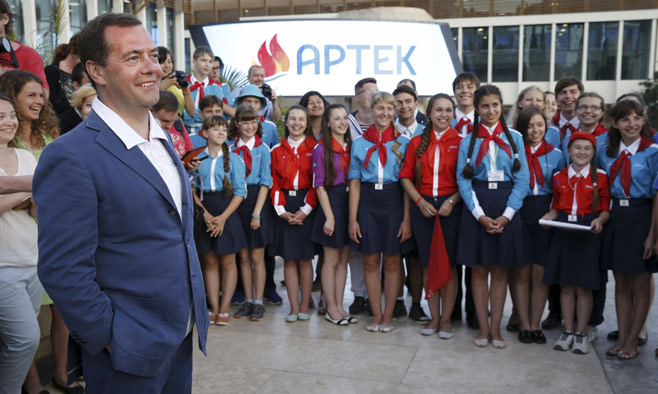 The anger among Gurzuf's residents reflects the resentment felt by many Crimeans at seeing their seafront steadily swallowed up by resorts and other businesses.

In Gurzuf, checkpoints line the town's main road and seaside promenade, and even though many resorts allow local residents access to the barred-off territories, locals find the constant checks frustrating and humiliating.

"We want to be able to look at the Black Sea, not through a gate … not past guards or policemen. Everyone should have free access," an angry Gurzuf resident said in a video of a protest rally published on Skorik's page on social media network VKontakte in May.

To make matters worse, most of the coastal town's residents rely on income they earn renting out their homes to tourists during the summer. For these people, limited beach access cuts directly into their wallets.

To complete its ambitious development plan, however, Artek will need all the space it can get.

The camp's projected turnover for 2020 is 40,000 — roughly double the amount of visitors recorded in 1990, a year before the fall of the Soviet Union.

"In 10 years, in every grade of every Russian school there will be at least one Artekovite," Kasprzhak bragged proudly in his article in Diletant.

This ambitious growth plan is not only about maximizing the number of children who undergo Artek's famous 21-day shifts of "healthy rest," which consist of a busy schedule of sports and social activities.

The new management also wants to turn the camp into a center for innovation in education by 2020 under the auspices of the Russian Education and Science Ministry.

Outlining his plans to build a second school, the camp's director said Artek could become "an alternative to traditional schools" that will enable teachers and students to experiment with new teaching techniques and technologies.

But with a natural barrier in the form of the Ayu-Dag mountain to the camp's east, Artek has little room to grow other than west — toward Gurzuf.

Adding insult to injury, residents have seen little to no benefit from the 22 billion ruble ($390 million) injection of state funds meant to resuscitate Artek.

A 140 million ruble ($2.5 million) tender to provide the camp with linen and uniforms was given to Russian sportswear giant and Olympic team outfitter Bosco rather than a local company, Interfax reported in May.

The catering at Artek has also been outsourced to non-local firms, and most of the camp's managerial staff has been brought in from Moscow, residents complained.

"[Artek] will become a little piece of heaven. But what about those of us right next to heaven?" Skorik asked. 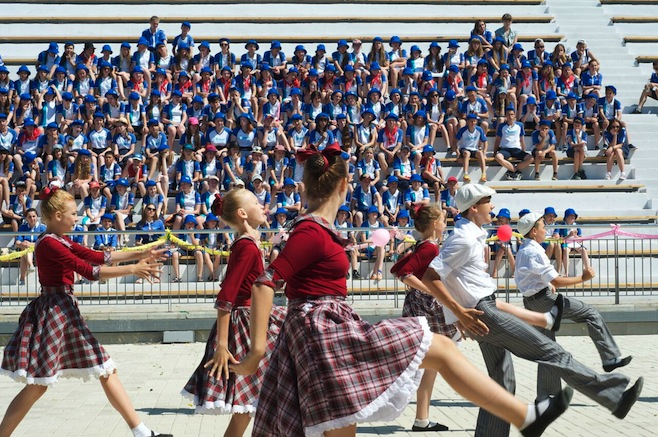 Children specially selected for their dance skills perform for their fellow Artekovites in honor of the camp’s 90th anniversary in June.

The camp's management and the protesters agree on one thing: the fate of Gurzuf's residents should not lie in Artek's hands.

"[The issue of residents' access to the coast] is not Artek's problem, but that of the town's municipal authorities," Kasprzhak told Moskovsky Komsomolets.

But residents say that local authorities have been too scared to pick a fight with the Kremlin-favored camp since it came into Russia's possession.

"Artek is a hefty figure on the chess board. No one wants to lock horns with them. They're scared they will lose," Skorik told The Moscow Times.

Having hit a wall, a group of Gurzuf residents — in traditional Russian fashion —turned directly to President Vladimir Putin in two video appeals posted online in May.

Making use of a rising wave of Russian patriotism, Gurzuf's residents asked Putin to turn Gurovskiye Kamni into a public park in honor of the Soviet Union's victory over Nazi Germany in World War II.

"We tried to appeal to Putin over people's heads. He has been known to stand up for the rights of minorities," Skorik told The Moscow Times.

With no sign of a direct intervention by Putin, however, Skorik says that he and his supporters are now taking the matter to court.

A lawsuit will be filed against Russia's Federal Service for State Registration, Cadaster and Cartography — the body that registered Artek as owning 218 hectares of land instead of 208 hectares — "any day now," Skorik said.

In the meantime, Artek's management has promised to allow residents access to the area until the next summer season — a concession Gurzuf's residents see as a sign of future victory.

"[Prussian statesman Otto von] Bismarck went to duel 27 times and survived. We hope we will survive as well," Skorik said with a grin.