On Friday a group of Russian culture organizations and tech companies teamed up to launch a new Internet literature event. The Chekhov Moscow Art Theater, Google, MegaFon and the Russian Book Union announced an online marathon reading of works by Anton Chekhov. The marathon, called "Chekhov Is Alive," will be on air for 24 hours on Sept. 25.

This will be the second online read-a-thon conducted in Russia. The first one, "Anna Karenina: Live Edition," took place in October 2014. Initiated by the Yasnaya Polyana Estate Museum and Google, for 36 hours nonstop the project broadcast online more than 723 people reading the novel in 34 locations. Fyokla Tolstaya, a journalist, radio and television host and great-granddaughter of Leo Tolstoy, who was one of the initiators of the project, said that they began broadcasting on a wing and prayer. "We just wanted to get through it. We didn't know if it would work or be listened to by anyone."

But despite the organizers' fears, the project went viral and even made it into the "Guinness Book of World Records" for the largest audience for a live-streamed reading marathon — 61,364 people. And unexpectedly, the impact went beyond the web. Yekaterina Kondratyeva, communication manager at Google Russia, told The Moscow Times, "People in the book industry told us that sales of the novel rose significantly after the marathon. That wasn't our goal, but it was a great success."

Buoyed by the success of the first project, the group decided to organize another marathon reading. This time the author is Anton Chekhov, since this year marks the 155th anniversary of his birth. Igor Zolotovitsky, rector of the Studio School of the Moscow Art Theater, Yelena Gremina, a Chekhov expert, and Natalya Anastasyeva, artistic director of the project, chose about 50 works for the marathon. The list includes all of Chekhov's plays and his most famous short stories. 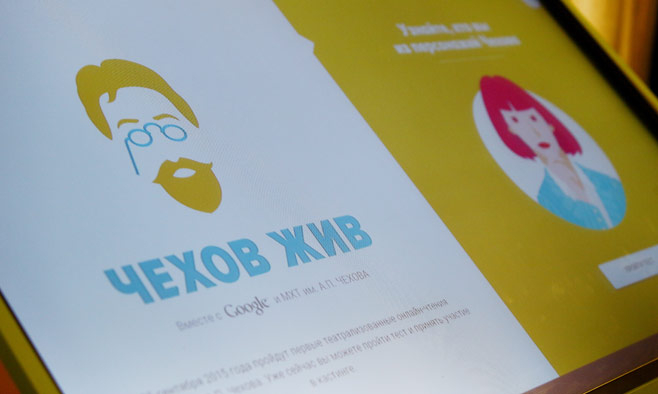 Which Chekhov character are you? Find out and do an audition online.

Readings will be held at over 20 theaters, universities, museums and other places associated with Chekhov's life, including the Moscow Art Theater, his house museums in Melikhovo and Moscow, and the "Island of Sakhalin" museum of Chekhov's works in Yuzhno-Sakhalinsk.

Tolstaya said that although they wouldn't be putting on radio plays, the readings will be more theatrical and dramatic than they were for "Anna Karenina." The texts will be performed by actors from the Moscow Art Theater as well as other Russian stars, including Oleg Tabakov and Renata Litvinova.

But Tolstaya adds, "The project is very democratic — everyone can read, from a state minister to a librarian from Snezhinsk, or a schoolchild and the director of a theater."

Casting for the roles is being conducted until August 10. To submit an online audition, go to the site chekhov.withgoogle.com and click on the test "Which Chekhov character are you?" After answering seven simple questions in Russian, you will be sorted into one of 28 of Chekhov's most well-known fictional characters and offered an audition passage. The site already has dozens of audition tapes, so you can compare your performance to other theatrical hopefuls. The best readers will join some of Russia's finest performers on September 25.

For Google's Kondratyeva, success will be outside the company's domain. "We'll consider it a success if people pick up a book — electronic or print — and read more."