KIEV — Alesya Bolot worked for a contemporary arts foundation that converted an abandoned factory into a mecca for young and bright people with daring ideas. Vibrant and cosmopolitan, the 27-year-old would not look out of place in a gallery in New York.

She was at the forefront of the avant-garde arts scene in the eastern Ukrainian city of Donetsk when a pro-Russian insurgency took over and upended her life. When a rebel-controlled local television station portrayed creative people like her as the enemy, she decided it was time to flee.

Bolot arrived in the capital Kiev a year ago with only a backpack, not planning a long-term stay. But she decided to remain after she was told she was on the wanted list of the self-styled Donetsk People's Republic, for alleged subversive activity. A year on, the Izolyatsia contemporary arts center runs a much smaller gallery in Kiev.

More than 2.2 million people have fled their homes in eastern Ukraine since the war between government forces and Russia-backed separatists began in April last year, according to the United Nations, some to neighboring Russia, but about 1.3 million to Ukrainian regions under government control.

Educated, middle-class people like Bolot, whose arts center was turned into a rebel training camp and prison, represent a big chunk of those who opt for Ukraine-controlled areas, especially the capital — a serious brain drain for Ukraine's east. There are so many of them in Kiev, the displaced say, that it often feels like their city has moved with them.

According to the UN, a total of 94,000 people from eastern Ukraine are now living in Kiev and its suburbs. More than 8,000 are subscribed to a "Donetsk people in Kiev" group on Facebook, set up by Vladimir Voronov, a 36-year-old who created the brand for the glittering new Donetsk airport, which was transformed into an apocalyptic wasteland by months of heavy fighting there.

For people who have left their careers, homes and often extended families behind, community outreach is vital for survival, Voronov says. Along with the war trauma, he explains, people from the east have to struggle with the dire financial realities of a recession, with the government offering a paltry 400 hryvnas ($20) a month in benefits.

"Because of the need to survive many people here have discovered new resources in them," Voronov says. "It's a seasoned community that has nothing to lose, has nowhere to go back to, all bridges burnt."

Voronov's friend and business partner, Andrei Budyak, runs the informal Donetsk community in Kiev. He says the community is helping newcomers to integrate, offering legal advice as well as a chance to simply "meet and chat, to have a good time to reminisce about the good old days." The community trades advice, organizes picnics and offers free classes for children.

The displaced long to return home but are afraid that the war has changed their homeland beyond recognition. Some feel betrayed by those who stayed, regarding them as supporting the separatists. Bolot says she is certain that many people who stayed in Donetsk do not share the separatists' views — but still finds reconciliation difficult.

"I don't know how you can live and work alongside people who have supported what is going on there," she said. 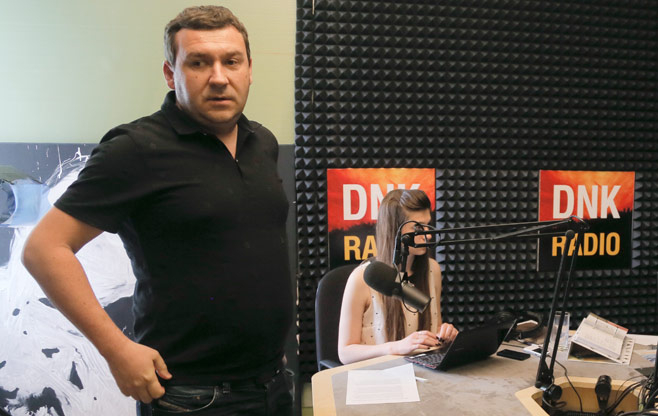 Vladimir Voronov speaks during an interview in Kiev, Ukraine, May 13. More than 8,000 are subscribed to "Donetsk people in Kiev" group on Facebook, set up by Vladimir Voronov

The population of Donetsk, the rebel region's largest city, is believed to have shrunk by a third from its prewar 1 million. A city that hosted the Euro 2012 football matches, with glittering store fronts and a vibrant restaurant scene, Donetsk is now eerily empty during what could be the rush hour, as if it's always a lazy Sunday morning.

The exodus has drained the region of countless professionals. Viktoria Sosnina, a gynecologist from Donetsk who fled to Kiev, says roughly half the doctors at her once-prestigious hospital have left. And so have many patients.

But Sosnina also defends those who choose to remain at home. She says a professor at her hospital in Donetsk stayed "because the hospital is his child. It doesn't mean he betrayed someone, like a child he cannot abandon it."

The Ukrainian government never organized a proper evacuation from rebel-held areas, but it has taken pride in "evacuating" major universities — opening new campuses in Ukraine-controlled areas and inviting students and faculty. Many stayed behind, however. The Donetsk rebels say 17 universities with 38,000 students operate on the territory they control; schools are open too.

The Donetsk National University literally split in two when it was ordered to move to the city of Vinnytsia and some professors and students chose to stay put. The university staff who moved issued a statement last year accusing those who stayed of "taking part in terrorist activities."

Most of those who have fled war-torn areas still have friends and relatives on the other side of the front lines, and are baffled by such claims.

Konstantin Reutsky, a human rights activist from the rebel-controlled city of Luhansk who now lives in Kiev, says many of those who fled the heavy fighting last summer are coming back to their hometowns, some driven by the hostility they often face as refugees "who came to take our jobs," some by the failure to build a life from scratch. But most of these people, according to Reutsky, leave again "when they begin to see the lack of prospects" in the rebel-controlled zone, a weapon-choked land in limbo.

Still, many of the displaced believe in an eventual revival in the east.

"Reconciliation is possible," says Sosnina. "But only when the fighting stops and people can talk freely without weaponry around them and without the poisonous rhetoric from both sides."

She says she is still in touch with her former colleagues in Donetsk: "When we talk, we try not to talk about politics."

Talks with the U.S., NATO and OSCE on Moscow's security demands failed to reach a breakthrough last week.
'not a realistic option'